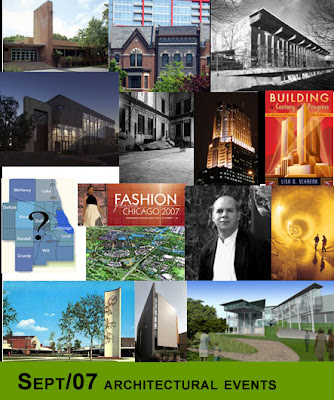 SNAP OUT OF IT!
aa
The Chicago architectural scene has sprung back into action big-time, with over three dozen events. You can tell things are heating up when Gordon Gill, Carol Ross Barney and Nathan Kipnis are all giving talks on the exact same evening at competing venues.

Preservation Chicago is holding its 2007 benefit at the Opera Lofts. There's an open house at Gorden Bunshanft's Hostess House at the Great Lakes Naval Training Center, and a rare opportunity to tour Eliel and Eero Saarinen's Crow Island School in Winnetka. Historian Bill Tyre talks on the history of Prairie Avenue, Charles Leeks discusses the Chicago Historic Greystones Initiative at APA. There's an update on progress at Adler & Sullivan's Pilgrim Baptist Church, and a book signing at CAF by Lisa D. Shrenk's for her new volume on building the Century of Progress Exhibition.

Landmarks Illinois unveils its 2008 most endangered Chicagoland Watch List. Mario Gooden and Charles Waldheim lecture at IIT. But wait - there's more! We're too lazy to put the links in this posting, but you can check out the entire September calendar for yourself here.