Around 2 P.M. on Tuesday, a major fire broke out on the roof of Berlin's landmark Philharmonie concert hall. Berlin Philharmonic musicians hurriedly broke into lockers and removed their often priceless instruments to safety. A final assessment of the damage is still to be determined, but it will be, without doubt, substantial. The Guardian reports that sparks from welders' torches set insulation materials ablaze. The only good news in all this is learning that Claudio Abbado is back. The fire broke out as he rehearsing the orchestra for a series of performances of Berlioz's Te Deum this coming weekend, now in a venue to be named later.

In 2006, welding torches figured in the destruction of two of Chicago's dwindling 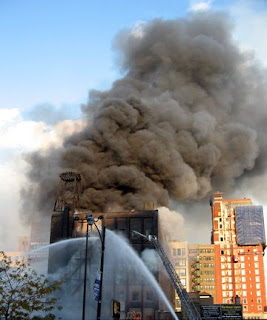 list of Adler & Sullivan landmarks. First, Bronzeville's 1891 K.A.M./Pilgrim Baptist Church was burned to its bare walls in January of that year, in a fire reported to have been caused by welders working to repair the roof. Only months later, the 1887 Wirt Dexter was destroyed by a fire begun by welders dismantling a boiler in the structure's basement. (The cause of a suspicious blaze in November of 2006 that wiped off the map still another Adler and Sullivan work, the 1888 George M. Harvey house, has yet to be disclosed.)

I'm not sure what the answer is to all this, but I'm pretty sure "Accidents happen" isn't it. Shouldn't there be tougher oversight on the use of welding torches in protected landmark buildings?