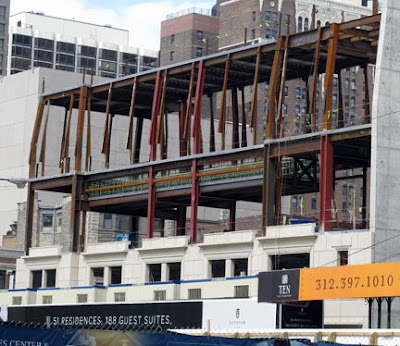 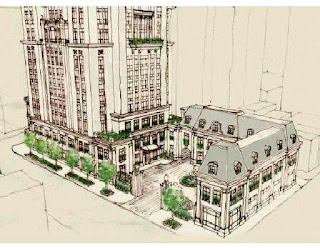 extravaganza, a 60 story, 686 foot-tall French Second Empire meets condo gulch confection. The ultra high-end project (two residences per floor) comes complete with its own quarter-block sized carriage court, empowering residents' fantasies of being aristocrats in the time of Napoleon the Third. (Don't trip over the Commune.) The rendering here is cribbed from skyscraperpage.com's coverage of the project, which includes extended (38 pages and counting), impassioned discussion of its merits.

For a brief period of time you can see, as pictured here, the intriguing structural frame that will support the courtyard's mansard roof, in one of project's rare fleeting displays of architectural honesty. 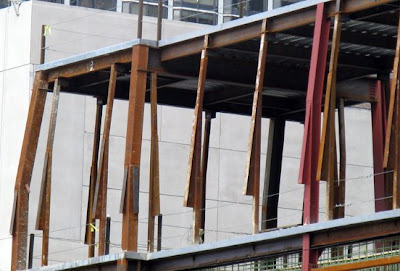 From a distance, those angled members almost look like they could be swinging in the wind, but a closer inspection reveals that they're firmly welded to more solidly vertical counterparts. Enjoy it while you can. It's great street theater, and one of those cases where the foundation garments hold more interest than the pretentious frocks that will ultimately be worn over them. 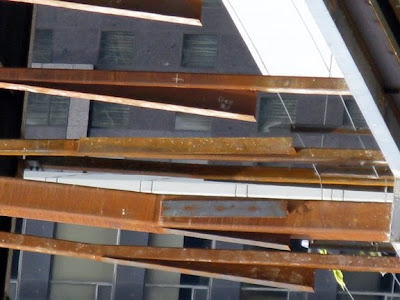 I live 2 blocks away and welcome the surge in property values, visual asthetics and street life. This is part of a lrager superblock plan that is absolutely stunning. Haters - be dammed.

There is nothing wrong with mansard roofs. They look good.

Also, there is nothing wrong with buildings in an older style. If the older style looked good in the 1800's, guess what. It will also look good now.

That is a simple principle that self-proclaimed "cutting edge" people seem to forget. Build something that looks good. And in my opinion, the Elysian will look good.

Sure, have a mix of old and new styles. Yes, enourage projects like the outstanding Sofitel and a Staybridge Suites. But the use of "older" styles in the Elysian is just fine and, in fact, is better than many of the generic glass boxes and concrete boxes that are getting built.

I think that the Elysian looks great.

The concern with regressive architecture isn't that it won't "look good". Of course classical architecture looks good, its based on sound proportions and was developed over hundreds of years.

What is problematic is the referential aspect and the use of nostalgia in order to market the architecture. Not to mention the fact that there is nothing progressive or remotely challenging about this building. Or if there is, its not reflected anywhere for people to see.

Don't get me wrong, I am all for the use of sound materials and classical scale, but this aesthetic says nothing about what is happening in our world today. Save, perhaps a small comment about nouveau riche trying desperately to cling to historic ideals and the power of a bygone era. Why not just buy a whole city block, put a fence around it and make it a gated community?

But really, especially in a city like Chicago that birthed Louis Sullivan, I would expect something more. As a minimum some kind of experimentation or development of architectural ornament would at least create a dialogue about a topic that isn't getting a lot of discussion these days.

The concepts applied in this building are stale, boring, and safe, and that is what is concerning.

thanks for the laugh... it doesnt erase the tears, but it was a nice.