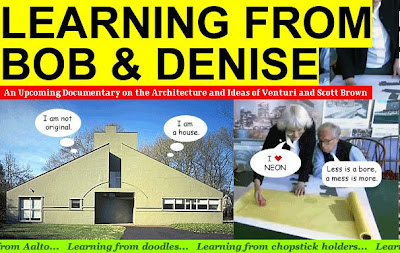 Celebrating its first birthday, Pecha Kucha Night Chicago, the unique forum that gives designers, foodies and other creative types of that ilk 20 images, 20 seconds each, with which to make a presentation in the relaxed informal setting of Martyr's on north Lincoln, will have as its June 4th opening act a 13 minute preview of Learning From Bob & Denise, an in-the-works documentary profiling architects Robert Venturi and Denise Scott Brown, the soft spoken but dynamo team whose work and writings - Learning From Las Vegas, and Complexity and Contradiction in Architecture - redefined architecture itself in the closing decades of the last century. The documentary's all-star supporting cast includes Frank Gehry, Rem Koolhaas, Ada Louise Huxtable, Paul Goldberger, Peter Eisenman, Tom Wolfe and Cher. Producer/director James Venturi (probable relation) will discuss the project, now in its fifth and final year of production.

Pecha Kucha IV in March, despite my presence as a presenter (that's me in the middle of the photo set above, scaring the small children), sold out, and there's no reason not to expect V will, as well. Wednesday, June 4th at Martyr's, 3855 North Lincoln. A "special opening act" is scheduled for 7:45 P.M., with the main program from 8 P.M. to 11:00 P.M. Tickets, $10,00, can be purchased here. Food and drink (pizza!) available for a modest increment.