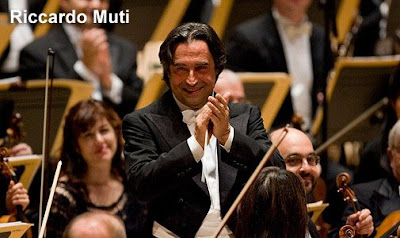 After an extended courtship, the Chicago Symphony finally landed a new music director last week in the person of Riccardo Muti, the charismatic Italian conductor, late of the Philadelphia Orchestra and LaScala, who has signed a five year contract that will run through 2015.

Like Julius Caesar, Muti had turned down the New York Philharmonic's entreaties to lead them, but just twice. The third time it was the CSO's turn. After a series of concerts with the orchestra warmly received by players, audiences and critics alike, Muti, who had professed to be happy to finally be free of permanent appointments, found that the CSO President Deborah Card made him an offer he couldn't refuse.

"It was not what I was expecting," Muti told Sun-Times music critic Andrew Patner, "but it is what I am excited about . . . I want both to devote myself to making music with the Chicago Symphony and to bringing music to the many communities of Chicago and to new generations. This is our future.” This sets him apart from Daniel Barenboim, who fled Chicago at least partially because he chafed under the non-musical duties required of an American music director. Muti tells the Tribune's John von Rhein, "I believe an orchestra exists for everybody in the community, not just for the people who can afford to give money and buy tickets."

Local media coverage of Muti's appointment can only be called ecstatic. All the bad raps on Muti - arrogance, lack of interest in contemporary music, too much hair - are refuted. It's reported that all the CSO, Barenboimites and anti-Barenboimites alike, are reconciled in their enthusiasm for Muti. You're almost led to believe that the conductor's first stop upon his return to Chicago will be Oak Street Beach, to walk on the water. Are we in for an infatuation, or an enduring romance?

Still, if you listen to Patner's extended 2007 interview with Muti, you get a picture of a supremely knowledgeable and still intellectually inquisitive musician who is approachable, eloquent and charming. (At one point he speculates with Patner about a potentional "festival of nuns", featuring works from Poulenc to Prokofiev.)

And just when you're turned off by Muti's supposed antipathy to contemporary composers, you find out, via von Rhein's Sunday story, he's conducted not only Ligeti (festival, anyone?) but the work of Ralph Shapey, and not in Chicago, but in Philadelphia.

In some ways, Muti's programming tastes seem to be a throwback to an earlier age, but that's not necessarily a bad thing. I still have an allergy to Respighi - a recent Muti programming choice here - but a March, 1975 Muti program with the CSO ranged from the Four Sea Interludes from Britten's Peter Grimes, to Stravinsky's Scherzo Fantastique, to Tchaikovsky's First Symphony. The one time I heard Muti conduct the Philadelphia Orchestra, at Carnegie Hall in 1984, it was a concert performance of Gluck's Orfeo and Euridice. And how pleasant it is to contemplate a performance of the C minor Requiem of Muti's beloved Cherubini sung by the CSO Chorus. It's not known whether he's ever programmed Bear Down, Chicago Bears, however.

At age 69 in 2010, Muti will be the oldest person ever to assume the post of CSO music director, five years older than Fritz Reiner when he took the helm in 1953. But while Reiner seemed an old man almost from the beginning. Muti appears, both physically and in spirit, at least a generation younger. And when you consider that over his first five years, Reiner created what remains one of the greatest legacies in classical music, including countless recordings that remain best in class even to this day, well, hope springs eternal.