Buy Our Museum or (and?) We'll Bury This Child

When you listen to Mayor Richard M. Daley's increasingly desperate attempts to vilify opponents of his effort to force the Chicago Children's Museum into Grant Park, you hear the voice of the suave European exile who appears at the beginning of the film Casablanca, cautioning a middle-aged tourist . . .

I beg of you, Monsieur, watch yourself. Be on guard. This place is full of vultures, vultures everywhere, everywhere.

As he delivers this warning and departs, the suave European places a friendly hand on the shoulder of the tourist, who will soon discover that his wallet is missing.

Similarly, on Monday Daley was telling reporters the museum was going to be built in an underground parking garage because "the community didn’t want to see the children. " He knows, of course, this is a shameless lie. He knows that from the very beginning, the

museum proposed building their new structure below ground as part of a calculated effort to evade and subvert the A. Montgomery Ward rulings that have protected Grant Park for over a century. But what's to be gained from honesty, when an angry rant guarantees prime placement on the evening news?

This is the same Mayor that tried to smear those wanting to protect Grant Park as racists. It didn't stick. He tried to portray them as child-haters. People laughed.

He said the only reason 42nd ward alderman Brendan Reilly opposed the museum was that he didn't have children. Anyone with children, the mayor said in an avuncular tone, knows the museum can't be built anywhere other than Grant Park. And when a coalition of opponents stepped forward to say no, as fathers and mothers of small children they, too, didn't want Gigi Pritzker's pet project in Grant Park, the Mayor seemed to be suggesting that their children would grow up to hate them. As quoted in the Sun-Times, he said of the museum opponents, "They'll go start petition drives. They're threatening everybody — your political life. They're gonna defeat all aldermen. They're gonna beat everybody in the world. But, one thing. Those children grow up and remember them," the mayor said.

And, of course, the Mayor said this knowing that his administration, from the start, has been strong-arming alderman to keep them in the pro-museum fold, pressuring them to commit political suicide by voting to override the long-standing principle of supporting each other's veto's of projects within their ward boundaries, a bedrock source of their power that the Mayor seeks to dilute and consolidate into his own hands.

Power isn't pretty, and you'll find no better portrait of it than in Al Podgorski's page 18 photo in Tuesday's (May 6th) Chicago Sun-Times. Understand, everyone can take a bad picture - I'm proof of that. But Podgorski's portrait of the Mayor isn't a gotcha moment; it's a remarkable Picture of Dorian Gray-like reveal of the mayor, his face contorted into a snarl, a sneering mask of contempt towards anyone who would dare to dissent from his judgment. This is the face that strikes terror into the hearts of alderman, commissioners and staff. This is the face that says, I own this city - get on board or you're less than nothing. (You have to pick up a hard copy of Tuesday's Sun-Times; the web version of the story uses a more conventional photo.)

Museum proponents, taking their cue from the mayor, have become firm adherents to the idea that any statement, however ludicrous, can be put over if you just say it with deadpan conviction. Children's Museum President Jennifer Farrington apparently believes she can make 100,000 square feet of construction disappear by telling ABC7, "We are not talking about bringing a new building, we are talking about a new resource to the park." Or, as Jimmy Durante once said, "What elephant?"

At a Tuesday morning debate with Alderman Reilly at the Union League Club, as reported by Medill Reports, Farrington again said that the Grant Park site was the only place for her museum. “No other location met our four requirements: A central downtown location, easy access to public transportation from all corners of the city, access to green space, and plentiful adjacent covered parking.” I can think of a lot of places that meet the first three requirements - I'll talk about my own choice later this week, but the fourth - covered parking - is simply bizarre. The Field Museum - no covered parking. Adler Planetarium, Shedd Aquarium - no covered parking. Altogether, they attract millions of parents and children each year. Do all those children somehow become enfeebled mutants when they visit the CCM? At Grant Park, won't many, if not most, disembark from buses on covered lower Randolph? No matter. Devise your clout-empowered whims in haste, come up with rationalizations at leisure. 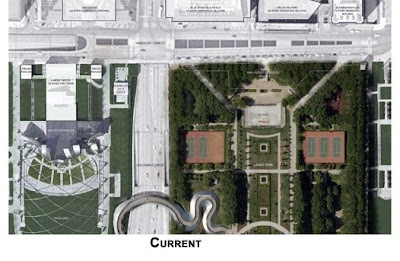 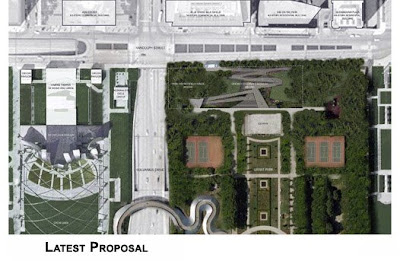 Last week, the museum issued still another revision of its design, which again claims to reduce the structure's presence in the park. It doesn't really. The high sculptural skylights of the previous proposal aren't really gone; they're just stuffed underneath a maze-like series of ramps and terraces stepping down from Upper Randolph. As you can see in the rendering below, the glass is still several times human height. A landscaped terrace off of Upper Randolph would become a narrow strip leading to the ramp entrance. Current ramps leading down to the park from Upper Randolph in both the east and west corners of the site would be replaced with a single entrance. The easternmost ramp is eliminated entirely. In the latest design, you can see the shadow of still another structure just north of the current tennis courts nearest Columbus Drive. To get from Upper Randolph down to the park, you have to keep doubling-back on ramp segments that are almost all about a half a block or more long. The museum's Randolph Street entrance has been cut in size by 3/4, and moved off the site and onto the sidewalk, the better to evade the A. Montgomery Ward protections. The latest revision is less a design than a legal stratagem. 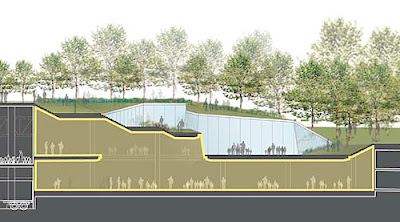 Check it out for yourself. Chicago Tribune architecture critic Blair Kamin has posted six drawings here.

Lynn, thanks once again, for an extremely thoughtful and reasoned argument!

The CCM benefactors have given so much that they can't afford umbrellas!!11!!1

Unknown said...
This comment has been removed by the author.
1:44 PM

One point that has been overlooked is that while reaffirming Aldermanic prerogative, our elected city council can once and forever break Mayor Daley's iron grip on its ability to freely legislate and do the right thing for their constituents. By voting against the move of the CCM to Grant Park, they will prove to Mayor Daley that his threats no longer have meaning. If the City Council finally has the guts to say, "I'm mad as hell, and we're not going to take it anymore." Will we here Mayor Daley mutter, "Rosebud!"?

Good point, JS. Maybe that's why Daley is acting like such a lunatic!

Chicago Traveler has a list of Chicago's most popular attractions (their source was Crain's). http://www.chicagotraveler.com/chicagos-largest-attractions.htm

Almost all of these are visited by many children, despite the lack of covered, adjacent parking as the CCM requires.

I agree with the premise of this post but just want to clarify that Navy Pier does have covered parking... over 1,700 spaces are on the ground level and in the 7 story tower.

Thanks to Gail for catching my error. Correction made.

Has anyone speculated upon or researched the likely successor
tenant to CCM's quarters at Navy Pier?

A member of the Union League said that "everyone knows" the mayor's plan is to clear off Navy Pier to make space for a city-owned casino.. though I hope he was joking.

Lynn,
You're being a hypocrite. On this topic, you rail against the mayor's authoritarianism and the taking of another's (in this case the public's) property rights; yet, when it comes to preserving property that you deem to be landmarks, you endorse those same tactics.

Sorry, no hypocrisy here. Landmarks are governed by the landmarks law, which includes highly defined criteria for landmarking, and very extensive procedures where owners and others can challenge the proposed designation. Nothing becomes a landmark without the approval of both the Landmarks Commission and the Chicago City Council. That's authoritarianism only if you believe representative government is authoritarianism.

The mayor, on the other hand, is working to subvert over a century of legal rulings protecting Grant Park.

Those so called criteria are so broad they are meaningless and do not exclude a single thing.

I guess you could call that highly defined if the intent is to designate every single building everywhere a landmark.

"every single building everywhere a landmark" equates to "259 individual designations and 50 landmark districts. Some 9,000 properties are protected by the ordinance." Out of the millions of buildings in Chicago, this is a very small percentage.

The point is that this laughable list allows the autocrats to pretend there is a rationale when they do designate something. That doesn't mean that they will designate everything, only that they can. They are well on their way. Communists are very happy. They are also happy about the Children's Museum on its way to Grant Park. Government knows best.

I really don't think government is going away anytime soon. (For all of Ronald Reagan's rhetoric, he didn't really shrink it much, and as for George Bush the younger - well, let's not even go there.

All power - public or private - has an element of coercion. The answer, I believe, is not to say that it all stinks - and have no effect - but to try to differentiate between valid and invalid policies and argue accordingly.