CAF (and the CPC and MPC) Eat Your Heart Out 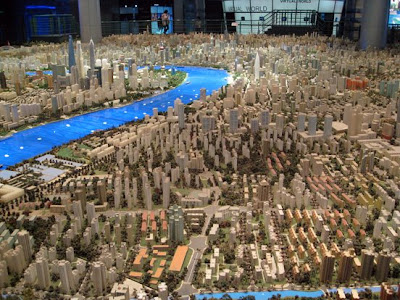 The engaging centerpiece of the Chicago Architecture Foundation's Cityspace Gallery is a large scale model of Chicago's center city. It's always a kick to stand above it and, feeling slightly God-like, contemplate the rich, sprawling density of the city and its skyline.

Just as it was once said that everything's bigger in Texas, however; we're now finding that the emerging urban landscapes of Asia and the Middle East are rapidly and spectacularly upping the ante.

Case in the point is the gigantic model shown above, 800 square meters in size, depicting Shanghai as it will appear by 2020. You can tell the future buildings by their being made of clear plastic.

As with the still another grand bit of model building, the model train exhibit at the Museum of Science and Industry, which stretches between a re-creation of downtown Chicago (structures sometimes relocated for your viewing convenience) and a similar scale model version of Seattle, complete with Space Needle, you can view the Shanghai model either at eye level or from the Olympian perspective of an upper gallery.

The Shanghai model is on the third floor of - wait for it - the Shanghai Urban Planning Exhibition Hall. 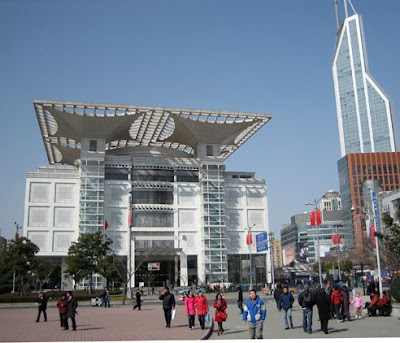 That's right: a six story building devoted to a museum of urban planning and development. Burnham would have been dancing with delight. It's claimed to be the largest in the world. (How many more could there be?) 18,000+ square meters, with a roof whose hovering grid is 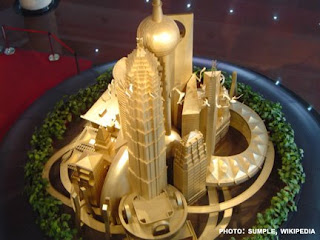 centered on four expanding eaves that represent the petals of a white magnolia, the Shanghai city flower.

Inside, there's also an exhibition on the last fifty years of planning in Shanghai, a gold monument in the lobby where many of the city's most prominent buildings stand cheek to cheek and rotate, and in the basement, a picturesque recreation of a 1930's Shanghai street, complete with trams, fire hydrants, tobacco stores, and the sound of movie music and the crashing waves of the Huangpu river. Hilbs meets Uncle Walt. 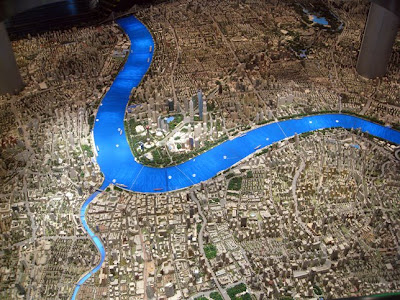 Note: this is the first of a series of posts that will present photographs courtesy from our roving anonymous - and generous - correspondent's barnstorming exploration of China earlier this year.

On the subject of 1930's and 1940's Shanghai, I just saw the movie "Lust, Caution," directed by Ang Lee, the guy who directed "Brokeback Mountain."

Anyway, "Lust, Caution" has some amazing street scenes of Shanghai in those days.

Oh, there was some sex, murder, and espionage, but I was looking at the buildings. Nerds will be nerds.