So, I'm walking east on Chicago yesterday to pick up Crain's and the Sunday NYT (in a disconnect of how the digital world should work, you can't see them on-line until Sunday, but you can buy the paper versions Saturday afternoon) and suddenly, I'm struck dead as I'm confronted with this: 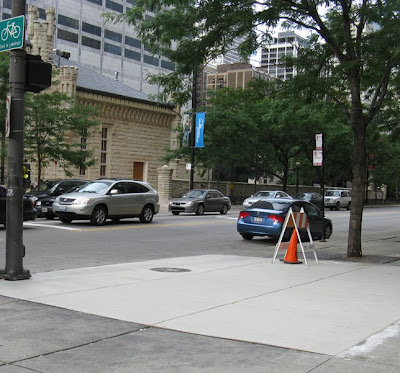 One of Chicago's last real newsstands, open 24 hours, that was there seemingly forever, suddenly vanishes into thin air, freshly poured sidewalks erasing any trace that it ever existed.

Crains's had already reported in 2007 how the decline in print media and aggressively priced subscription offers from publishers were squeezing single copy sales and newsstand operators' future. For the city, however, that death march wasn't moving fast enough.

It's another pound of flesh being extracted by JCDecaux S.A., the French firm with which the city signed a 2002, 20 year, $200 million deal for a monopoly on the city's bus shelters. As with the recent parking meter deal, the Daley administration continues to turn control of Chicago's streets over to private interests, and now we have things like a new Pritzker Park in the South Loop, where a huge area has been left unlandscaped to provide JCDecaux a place to put one of the food concessions promised them as part of the deal.

Crain's Ann Saphir reported on Friday that the destruction of the Chicago Michigan newsstand was still another manifestation of JCDecaux's control, as they will be constructing their own replacement beginning "at the end of the month."

And, of course, while the city makes sure Decaux is taken care of, the newsstand's proprietor, Anil Modi, who works long hours to keep his business going, gets screwed. He apparently gets to return, but no matter how long it takes to build Decaux's stand, he'll receive not a penny of compensation for all the lost income, no doubt part of the city's strategy to just make him go away.

Instead, according to CDOT spokesman, he'll get "better accommodations," a euphemism for the relentless Disneyfication of Chicago's streetscapes, where every bit of character needs to be rubbed out for the banal and generic. What I'm sure we'll soon see at Chicago and Michigan is one of JCDecaux's dark, thick-limbed Bob Stern specials, with the incredible mosaic display of magazine covers that Modi provided replaced by a small area to display his wares and really big areas for ads that line Decaux's pockets.

I remember when I was in high school on the South Side, back when dinosaurs roamed the earth (1972), someone in my senior-year creative writing class wrote a short essay - not more than a paragraph really - about how no one erases in Chicago: they just write over, as with old painted advertisements on the sides of buildings. I guess Chicago's got plenty of erasers now.

Stop reading the NYT... the Chicago rags are better!

That newsstand was one of my first memories of moving to Chicago. I passed it every day on my way to work and for years bought all my magazines there. So sad.