Gustav Mahler's final symphony, the 10th, was left so far from finished at the time of composer's 1911 death, age 51, that fervent Mahlerian advocates from Bruno Walter to Bernstein to Boulez have refused to perform the work in any of the versions completed by other hands, most successfully that of Deryck Cooke, which remains the gold standard to this day, the one that finally convinced Mahler's 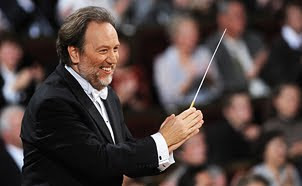 widow, Alma, to allow the work to be performed in full. The last two of the symphony's five movements, and most of the third, were left by Mahler only in short score, not fully orchestrated. Yet I don't think I'm alone in considering the Tenth, despite the weakness of the inner movements, perhaps the most extraordinary and affecting of all of Mahler's works.

Berlin Philharmonic's Simon Rattle, are performing the Tenth complete. One of the great losses of the last Chicago Symphony season was when health problems forced conductor Riccardo Chailly to drop out of scheduled performances of the Tenth with the CSO, after which the program, itself, was dropped in favor of substitute programming.

Through about noon Monday, however, you can hear Chailly's superb performance of the 10th with his own orchestra, the Leipzig Gewandhaus, that took place this past Monday at the London Proms. It's available via streaming audio here, and it's highly recommended.

If you know the work, however, you'll be slightly shocked not to hear, at the beginning of the last movement, the usual Thwack!s on a muffled bass drum. According to Tristan Jakob-Hoff, Chailly has taken his own pencil to the score and replaced the single-note Thwack! with a "short, 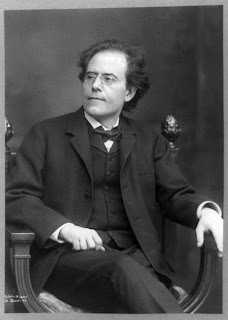 Jakob-Hoff calls it "something better . . . .That particular rhythmic motif appears in various guises all the way through the symphony’s last three movements."

I'm not convinced. One of the most extraordinary things about the Tenth is how, at key points, it erupts with incredible rawness. Think of that sustained high-pitched note on the trumpet that sounds almost like a riff on an air raid siren, a terrifying prophecy of the sweeping waves of brutality and violence in which, not long after Mahler's death, the 20th Century would begin to drown.

To me that Thwack! is equally pivotal. It's said to have been inspired by a similarly struck drum Mahler heard outside his New York window, part of a funeral procession for a city fireman. When Chailly accents the drumbeat to mirror and integrate it with parallel melodic figurations elsewhere in the symphony, he softens, dilutes, takes the edge off the shock.

As Mahler was finishing his work on the Tenth, his health had begun to fail; he could feel the premonitions of death. And, he knew that the love of his life, Alma, was having an affair with another man. Those dull, empty, echoless thuds are the airless horror of the moment you turn and find the end of your being pressed like a prison cell wall against your face. The sick dread sinking in the pit of your stomach, the light suddenly snuffed out by an unseen, indifferent hand as you realize: there's no life, no love, no music.

Except, of course, Mahler gives us all three. They are his answers to that dread, to the abyss. If, as Leonard Bernstein argued, Mahler's Ninth Symphony was a series of farewells to the things the composer loved best, the Tenth takes it further. Mahler now sees those things from the grave, continuing on after him as if he never existed. To me, the final adagio of the Tenth is Mahler coming to terms with that fact with music that is giving, sublime and incredibly moving. No personal resurrection, but the gift of spirit, anima, in every breath of those Mahler touched and who live on, down to the audiences of today.

Judge for yourself, but remember you have only through Monday noon to hear Chailly's exceptionally fine performance, here.

I loved your comments about Mahler's Tenth. As a long-time Mahlerite, I resisted for a long time even listening to the 10th's Adagio, which was said to be "finished". Knowing how Mahler worked, even if the Adagio looked to be "finished", it easily could have been reworked or revised by him prior to him declaring it finished. And a couple years ago I was completely annoyed by Haitink's continued obstinence in his performance of Mahler's Sixth, where he continues to defend his Dutch mentor Maestro Mengelberg's flawed decision to play "scherzo-andante", a reading that's clearly in error.

So when I finally heard the Tenth performed, I realized what you've discovered about this symphony, and more.

The first movement (Andante) is in my view a pivotal piece of music, the bridge between the Romantic and the Modern era. In this movement, Mahler shows his connection to Schoenberg and the rest of the modernists. Listen close, and you'll here Mahler getting close to 12-tone scale theory (he's two tones short). But clearly at the cusp. Had Mahler not died at 50, he was clearly at the helm of the change, he showed the way to Schoenberg.

You'll of course realize too the slippery slope you're on, with your distress at the "modification" of the drum thwacks. Since these movements weren't finished by Mahler but someone else, they're open season to anyone with a "better" idea.

But the Tenth Andante. It's the missing link.

I really enjoyed your piece. While I live overseas, I'm Chicago born and raised and visit often, including for a week starting the 23rd.

I was very interested to see this blog about Chailly’s Tenth last Monday in London.

Three of us were there in the Royal Albert Hall for the concert. Yes, when I heard those triple whammies in the last movement, I was indeed startled and puzzled. There was comment on these drumbeats in the British Guardian and Independent.

“When Chailly accents the drumbeat to mirror and integrate it with parallel melodic figurations elsewhere in the symphony, he softens, dilutes, takes the edge off the shock.”

I can assure you that, even in the gargantuan Albert Hall (almost sold out), the shock was by no means softened or diluted. Those terrible multiple drumbeats went through us like a roll of thunder (my wife had to hold on tight to me). I have never heard anything else so electrifying and penetrating in a concert hall (and it’s the fourth live Tenth I have heard).

And we are not sure that it was Chailly who took his pencil to the score for those grace notes. After the concert we examined a reproduction of the manuscript, and our friend Kitty Warnock spotted there next to one of the drumbeats what appears to be an ornament. This page was also reproduced in the concert program.

I have heard the recording from last Monday, and the drumbeats are, admittedly, strongly attenuated. It’s assuredly a matter of the recording technology.

But the rest of your blog was indeed arresting. Will study it more now.