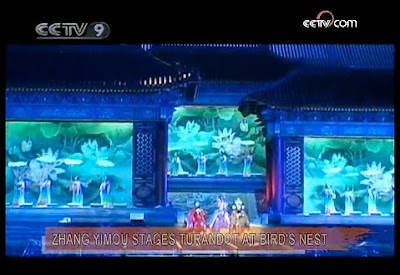 And you thought Zeffirelli was over the top?

For China's National Day celebration on October 1, Zhang Yimou is remounting his spectacular production of Turandot, staged at Beijing's Forbidden City in 1998, in the Herzog & de Meuron "Bird's Nest" Olympic stadium where Zhang also staged the blockbuster opening ceremonies of the 2008 games.

Mahler/Schamaler, this will be an "Opera of a Thousand", with China's CCTV reporting there will be 1,000 square meters of video screens and 34 projectors. The choreographer will be Chen Weiya and the lighting engineer Sha Xiaolan. Singers and conductor to be named later, if ever.

To accommodate set-up for the production, the Avenue of Eternal Peace will be closed to vehicular traffic for four days, with 63 bus lines rerouted to the 5th ring road. "This is a great thing we’re doing," said Beijing's mayor, Wang Qishan, in defending the closure to reporters. "I wish we could do this every day. It will employ 200,000,000 people. It will pump 3 trillion yuan into our economy. It will cure all known diseases. The publicity we’ll receive throughout the world - unbelievable. You can’t even give us that exposure globally. We'll be bigger than Oprah!"

And if there's any doubt where the age of affluence has been moving to, the production's budget is a staggering $180,000.000, about six times City Opera's most recent budgets, or enough to fund over three seasons at Lyric. After Beijing, it's set to go on tour. Read the CCTV report here. See the video report here.