Millennium Park was an instant Chicago landmark when it opened in 2004 and its attractions - the Pritzker Pavilion and Gehry bridge, Cloud Gate (aka "Da Bean") and Crown Fountain with its giant spouting faces - are as popular as ever. Over the past five years, however, something perhaps even more remarkable has grown up all around them: hundreds of trees of over eight species, part of an incredibly varied assembly of plant life, built atop a parking garage and what is essentially a viaduct over the former Illinois Central tracks, that has been called the largest green roof in the world. 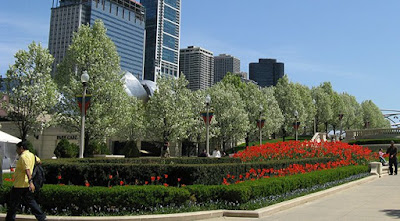 Spring is the time of the pear trees lining the east-west promenades, breaking in spectacular white flower. Along the north-south promenades, the big boys take over. Soon we'll see the spectacular Fall flaming of the Autumn Blaze maples (2003 Tree of the Year!) which seem well on the way to reaching their potential maximum height of 50 to 60 feet. 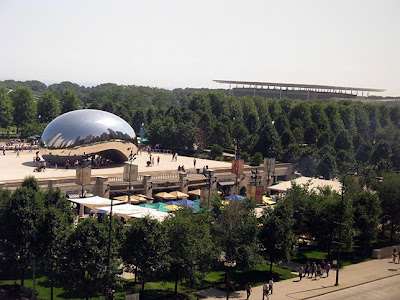 Encountered on the ground, the trees form perimeters for the park walkways. Seen from above, the treetops merge, seeming to stand shoulder-to-shoulder, soaring in a majesty that ups the ante on the manmade skyline of the city of big shoulders. Seeing Renzo Piano's Modern Wing rising out of the dense foliage, it puts me in mind of the story I read as a boy of the vines of the jungle overtaking the grand opera house in the (then) lost city of Manaus, at a time when nature still had the upper hand in putting man's vanity in its place. 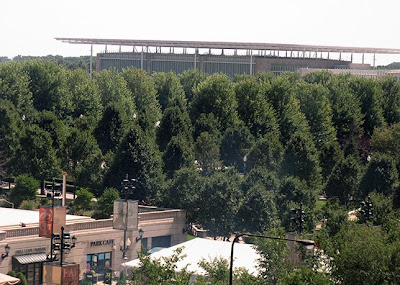