Saturday, September 19th at The Hinsdale Market antique shows benefiting The Community House in that suburb, historian Sally Sexton Kalmbach will be signing copies of her new book, The Jewel of the Gold Coast: Mrs. Potter Palmer's Chicago. Bertha Honoré Palmer, even without a 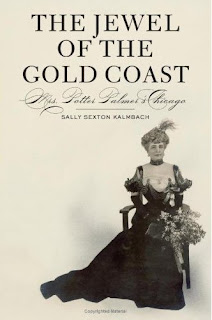 mega-popular television show, was the Oprah of her day, - the "Queen of Chicago". For nearly half a century, from her 1870 marriage to Potter Palmer, creator of both State Street and the Gold Coast, to her death in 1918, she was one of the city's most energetic and effective movers and shakers. The book is also on sale at the Chicago History Museum, whose own exhibition, Bertha Honoré Palmer, up through January 4th, displays a selection of Palmer's personal effects and gowns that "are among the most opulent examples of late-nineteenth and early twentieth-century dress." And if you prefer roses with your history, you can also pick up a copy of The Jewel at Mangel Florist in the Drake Hotel, 140 east Walton, which will be the departure point for Kalmbach's walking tours of the Gold Coast, Friday, September 25th from 2 to 4:00 p.m., and again on Saturday the 26th from 10:30 a.m. to 12:30 p.m. Email Ms. Kalmbach for more information.

Sunday, September 20th, the Edgewater Historical Society will be

offering it's 2009 Edgewater Home Tour, including a tour booklet and map for a $25.00 per person donation. This year the tour focuses on the Magnolia Glen neighborhood, and includes the twin John Gauler houses, from 1908, designed by Walter Burley Griffin. Both exteriors and interiors will be featured, with a docent at each house providing its history and describing its features. Reservations are not required. Register at Bethany Lutheran Church, 1224 W. Avenue between noon and 3:00 p.m.