I've written about this before, but one of the high points of my childhood was when my grandmother would take me with her when she came downtown to have her hair done at Marshall Field's. Imprisoning a male child in a room full of women under hair dryers was, as I understand it , officially classified as torture under the Geneva convention, so I was allowed to go downstairs to look around, as long as I promised not to leave the store.

Of course, as soon as I got downstairs, I was bolting out the door, into the wonder of 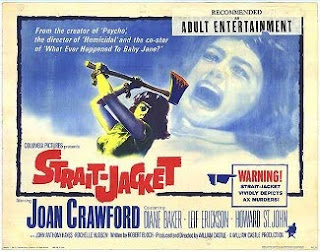 State Street, which at the point of time was that great street, a dizzying explosion of people, sights, smells and sounds. I remember walking pass the Roosevelt Theater, which was built with my great-grandfather as the superintendent of construction, and hearing terrifying screams coming from a huge Klipsch speaker set out on the sidewalk, part of the promotion for a film called Straightjacket, whose suspense was a matter of whether star Joan Crawford, a long way from Mildred Pearce, was or was not an ax murderess.

Hungrily, I stumbled from one amazing thing to another, until I stopped dead in my tracks. Looking up the street, I saw this: 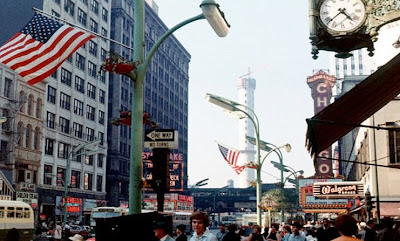 Rising up in the distance, seemingly out of nowhere, one of two impossibly thin stalks of concrete, rising up into the clouds, as strange and mysterious as Stonehenge, or the fabled lighthouse of Alexandria. 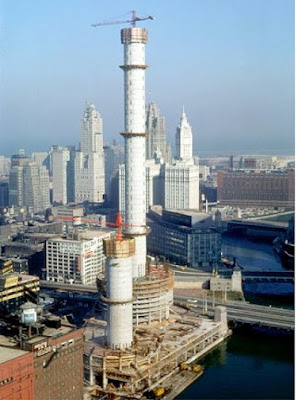 These were, of course, the cores of Marina City, Bertrand Goldberg's iconic complex on the Chicago River that broke with Miesian orthodoxy to reimagine the skyscraper in a distinctively Chicago way.

These images are among 72 newly discovered photographs of Marina City's construction, taken by the Portland Cement Association, which Steven Dahlman has just put up as a slideshow (turn down your sound if you're not an Aaron Copland fan) on his remarkable Marina City Online website, perhaps the most exhaustive site anywhere devoted to a single complex of buildings. Check out the slideshow here. 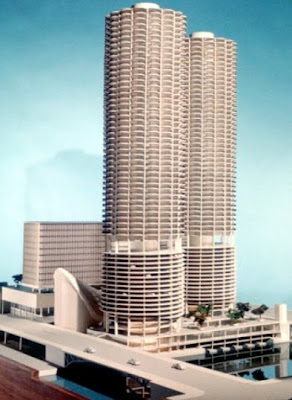 Among the items of interest is the above photo of an early model of the complex, in which the office building looks slightly puny set within the perimeter of the podium, instead of flush with it, as in the final design.

There are a number of very interesting shots, including this one of the reinforcing steel for the columns, whose shape almost seems an homage to Mies's glass skyscraper project from the 1920's.

There are also shots of the office building podium under construction. 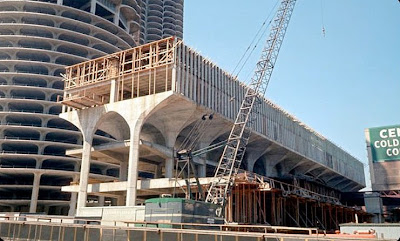 And of the geometric building blocks of the complex's theatre, including these triangular end walls. 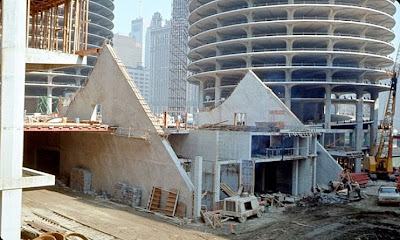 It's an amazing set, which also gives you a good idea of how undeveloped River North was before Marina city, with a complex of huge cold storage warehouses directly to the west. See all of these great photos here.

I don't have much to contribute, just want to say I really appreciate you sharing these photographs, great stuff!