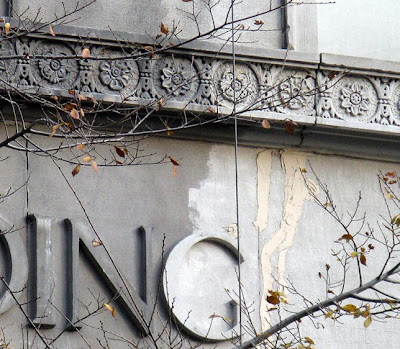 I actually read a comment on the Skyscraper City website that slammed the cleaning of Holabird and Roche's 1894 Old Colony building, saying how much they preferred the grime encrusted facade that we'd come to assume simply mirrored what was underneath. And one point the poster made - that the cleaning has brought every flaw and bit of broken decay into high relief - has certainly proven to be valid.

But how can you not see what's been revealed as a small miracle? 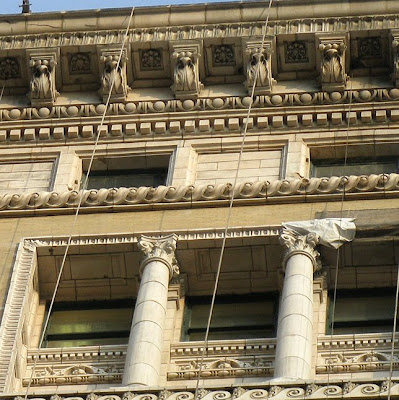 Not a dark, forbidding hulk, but brick and terra cotta almost shockingly light and graceful. 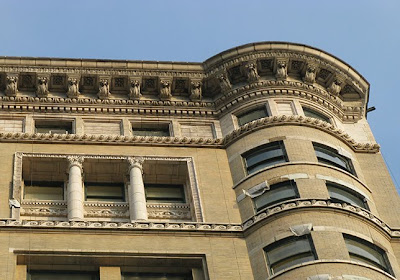 Not a shadow-soaked, menacing Gotham, or a bleached Burnham Ultrabrite white, but a sunny Mediterranean expression of the City Beautiful. Match it with the exuberance and color of Burnham's Fisher Building, built just two years later on the other side of Van Buren, and we've restored, a century after it was last seen as the architects originally intended, one of the most handsome gateways in Chicago. 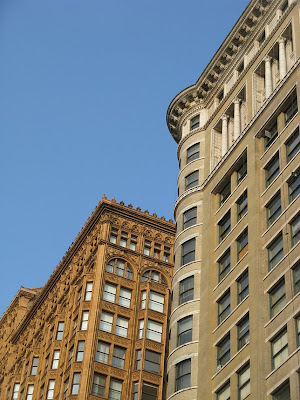 Kinda reminds me of the people who complained about the cleaning of the Sistine Chapel.

I'm on the pro-dirt bandwagon, actually. I think the cleaned facade looks flat and dull. The sooty version had so much character.

flat and dull? tell me honestly you could see all the terra cotta detailing you can see now. soot has character? so did Pigpen, but most people didn't see this as a plus.

I worked next door to Old Colony for 3 years and I have never seen it better. Cheers to the clean up and to the character it contributes to the surrounding context.

A soiled dove no more! Oh, what wonders a nice, hot bath can do. Coal-fired locomotives and furnaces were replaced decades ago yet this building wore the soot of the Victorian Age for far too long. It was positively tragic that this building had been allowed to fall into such horrible shape. I look at the Old Colony and cannot help but think of other diamonds in the rough, namely the Reliance Building and the Blackstone Hotel, which after years of neglect, were finally restored to their former glory. The Old Colony is well on her way to becoming the Cinderella of Printers Row. And what a fabulously feminine building too. Those rounded corner bays truly set the building off., cutting a marvelously voluptuous silhouette. The cleanup allows one to see the ornate detail in the cornice as well as the stunning colonnade at floors 15 and 16. Sitting at the same table as the Fisher, Monadnock, and Manhattan, this Angel with the Dirty Face deserved so much better. I’m glad she got it.