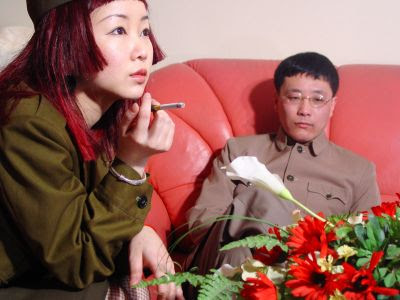 A six hundred foot panda dangling high above a fantastic city. A grandmother and her 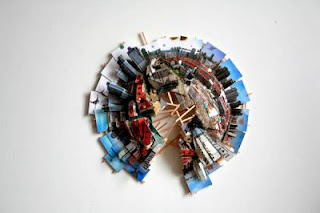 friends playing Mahjong in the sunlit room of a Shanghai Shikumen. An aerial view of the same city splayed out like an exploded photopie.

This is the range of Reversed Images: Representations of Shanghai and its Contemporary Material Culture, a remarkable exhibition at Columbia College's Museum of Contemporary Photography, which brings together the work of about two dozen artists seeking to capture in images wildly divergent in both viewpoint and technique the explosive character of Shanghai, ancient city and contemporary boom town of 20 million inhabitants, China's largest city. Something mysterious. Something delirious. (more of that in a moment)

But let's start with something domestic. Tonight, Thursday, November 19th, at 6:00 p.m., you have a chance to attend a screening of three documentaries that are part of the exhibition which, unless your time has no limits, are really too long to take in as part of your tour of the galleries. Mathie Borysevicz's Taian Lu, at 13 minutes, is the shortest, in which a decaying building from the colonial period becomes a stage set to a cross-section of contemporary Shanghai. French filmmaker Sylvie Levey's Shanghai Waiting for Paradise, twice as long and five years in the making, follows three generations living in small apartment, awaiting relocation for when their neighborhood is demolished for new development.


The last film, which I was able to see a large portion of during my visit to the exhibition, is Nostalgia, from Shu Haolun, a Shanghai native who was introduced to the creation of documentaries during his studies at Southern Illinois University. In Nostalgia, he revisits his childhood home, again destined to be replaced by megadevelopment, one of the Shikumen alley neighborhoods, named for the distinctive stone gateways above their entrance, once home to diplomats and their families during the colonial period, and then to an increasing number of families jammed together under one roof in the period of Mao. It's leisurely paced, to put it mildly. Nothing happens, and yet everything happens. You see the trajectory of a family through its once proud furniture, spaces that provided the frames for youthful crushes, cramped wooden stairways like something out of Escher, that seem to overtake a building, with the local crazy woman hurling curses at the bottom. The past recedes and flattens. People talk of the time of the Cultural Revolution as if it were just another series of summers. 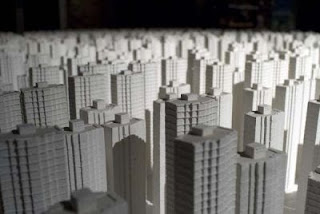 The exhibition, itself, which runs through December 23rd, is a must-see. For a museum that says it's all about photography, Reversed Images is multi-media to the max. There's David Cotterell's, South Facing, 72 square feet of identical white models of skyscrapers that gives you an idea of what River North might have become if only the boom could have held 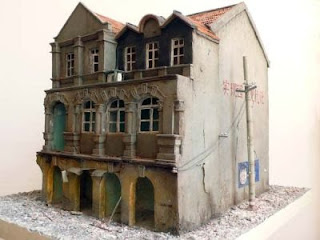 on a decade or so longer. Su Chang's Citylife Really Makes your Life Better? offers still another model, this one a picture perfect replica of one the traditional buildings destroyed in Shanghai's more enduring boom. Another sequence offers a duality of photographs, the first taken by Xu Xixian as he moved through the city with his young son in the 70's and 80's, the second taken by the son twenty years later in the same, now radically transformed, locations.

And now for the delirious. At first you may not even see it, projected on a wall behind you as you mount the stairs to the highest gallery level. But look back and there it is: RMB City, the vision of China Tracy, the avatar of artist Cao Fei, one of six finalists for the 2010 Hugo Boss award for contemporary artists.


RMB City is a place in Second Life, the 3D Virtual on-line world where you create a avatar with which to interact with the other avatars of the 16,000,000 registered users in worlds that those same users have created.

RMB City comes with its own manifesto, which quotes everyone from Italo Calvino ("The Castle of Crossed Destinies"), to Marco Polo (“It is a city made only of exceptions, exclusions, incongruities, contradictions."), to Parsifal (“The core of the world is emptiness, the rule of the moving things and objects in the universe is empty space, those which exist revolve around non-existence…”)

And so you have a surreal agglomeration of urban and cultural icons. The aforementioned dangling panda is one end of a massive steel beam teeter-totter-in-the sky with Rem Koolhaas's CCTV tower at the other. It shares the stratosphere with a gigantic spinning "People's 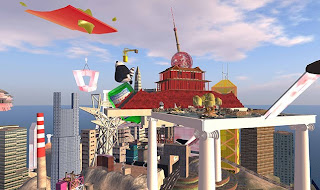 Observation" Bicycle Wheel a la Marcel Duchamp. As you move you through the city in vertigo-inducing swoops, you'll also encounter Tiananmen Squares' Gate of Heavenly Peace, the Herzog and deMeuron's Bird's Next, smoldering skyscrapers disturbingly evoking 9-11, a levitating People's Aerial Castle that looks like the stepbrother to the Star Wars Death Star, the People's Bomb Center, the People's Patron Saint marooned in the sea just offshore, hand upraised in salute, tilting wayward. Flames flare from the top of a soaring smokestack evoking, William Blake's Satanic mills. Everything crammed and stacked, with traffic and trams wending their way through the chaos.

It's like a perpetual motion machine set into action by a creator who then walked away. As opposed to most of Second Life, in which the avatars explore, chat, shop and copulate, RMB City is eerily empty. The stores sell nothing. The courtesans entice but remain untouchable. Interactive elements simply don't function. According to its creator, it has never had "any secrets or things waiting to be unearthed."

Most simply, Cao Fei had no real interest in putting in the kind of work required to create an 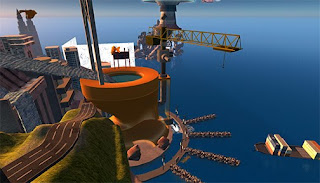 ongoing, interactive community for the SL population. As she says in a recent interview on the Not Possible in Real Life blog:

RMB City is an art project and contains references to contemporary cultural concepts. There is satire, but also praise and even admiration. But this does not describe it in its entirety. There is also loss, melancholy, memory and nostalgia. As a cultural "space," it lends itself to research, discussion, experimentation and realization. As a spiritual site, it is a constant, ongoing drama. As a reflection of contemporary China, it has the revelry and balderdash of postmodernism.

RMB City has no claims to having anything to do with the Burnham Plan Centennial, but somehow it has more to say about the basic ideas than a lot of the official components of the celebration.