It's completion was six weeks late, but it's left the stage with the speed of a zephyr. Via our indefatigable correspondent Bob Johnson, here's a photo account of the quick departure of the Burnham Pavilion designed by Zaha Hadid Architects. 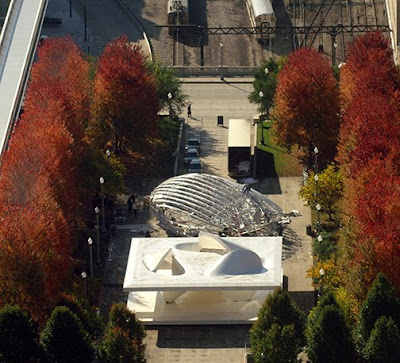 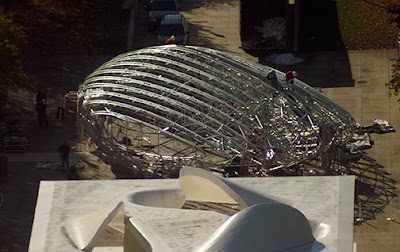 After closing on the last day of October, tent fabric that had become streaked with grime only days after its opening was quickly stripped away, leaving the pavilion to be seen, however briefly, at its best: a beautiful, intricate aluminum shell. 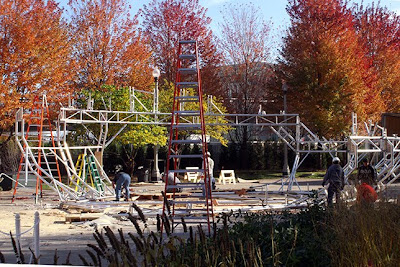 . . . which construction crews made quick work of dismantling . . . 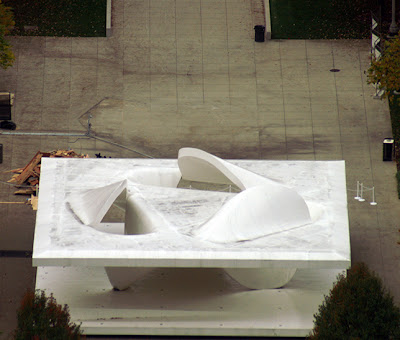 . . . leaving only a grimy sidewalk shadow behind. 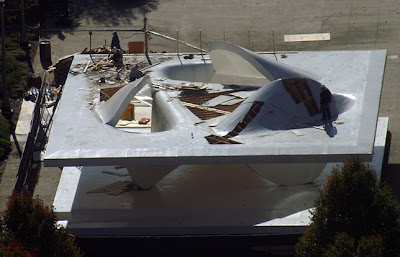 Now the wrecking crew turns its attention to Ben van Berkel's UNStudio pavilion, the glossy white surface pried away to reveal the plywood guts beneath, with the underlying steel frame still to be revealed.

When we wrote about it this past April, the Hadid pavilion was touted as being "designed to be re-used, a 'giant erector set' whose structure can be dismantled, its fabric "zipped into bags" to live another day in a different location, for a new purpose." But like so much else with the wildly dysfunctional Hadid pavilion, the truth fell far beneath the claims. Like the van Berkel, it's now simply headed to the recycling bin, never to be seen again.

What a waste a complete waste... so tell me about this preservation movement again...you want to do what?

Ya - lets write off 09 as the year of the duds. Both Pavilions were ill concieved, left over knick knacks from another era. The Trump is hum drum and the Olympics evaporated. Heres looking to a better 2010.

I loved the idea behind the display of these structures, but they were more snack-sized Snickers bars than anything else.

And the Hadid structure was just a glorified tent. Hadid's Chamber Music Hall for Manchester International Festival in Manchester, England puts the Chicago structure to shame.

Oh, and thanks, Lynn for showing Bob Johnson's photo series of the Burnham Pavilion being taken down. It's a neat to see the progression.