Julius Shulman: Visual Acoustics. Today, Friday, November 20 through November 26, Facets Cinémathèque opens a one-week run of Visual Acoustics: The Modernism of Julius Shulman, a documentary by Eric Bricker on the life and work of the legendary photographer who died this past July at 98. Info and showtimes here.

The film, narrated by Dustin Hoffman, includes interviews with the son of Richard 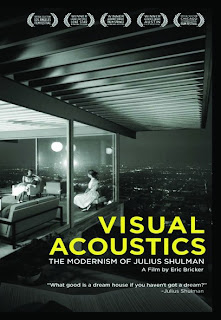 Neutra, who, along with other architects such as Rudolph Schindler and John Lautner turned to Shulman for iconic photographs that would be the visual passport that spread the allure of California Modern into the heart of 20th century culture.

It captures a still very active Shulman at a time of closure, as he's packing up his massive photographic archives for their new home at the Getty Research Institute. Among others putting in an appearance are Frank Gehry, Riccardo Legorreta, Kelly Lynch, Joe Rosa, Benedikt Taschen and cinematographer Dante Spinotti, who photographs Shulman's return to Pierre Koenig's Case Study House No. 22, for which Shulman's 1960 portrait, in which two young women casually chat in an all-glass living room that seems suspended in air over the twinkling lights of Los Angeles, far below, made it a visual anthem for mid-century modernism.

I saw this film at the Chicago International Film Festival, and found it an entertaining and informative overview of an extraordinary life, with - inevitably - many great images. The Shulman in the film was very much like the man I remember from a 2006 appearance at the Art Institute, in which he split his time between a compelling discussion of his work and - despite the best efforts of Joe Rosa - shamelessly flirting with female members of the audience. Did I mention the film also has Kelly Lynch?

Sean Keller: State of the Art:

Specificity. Tuesday, November 24th, 6:30 p.m. at at iSpace, 230 W. Superior, 2nd floor. The Chicago Architectural Club sponsors a lecture by Sean Keller, assistant professor of architectural history and theory at the Illinois Institute of Technology. He received his Ph.D. from Harvard University and has been a visiting lecturer at Yale University. Keller has been a frequent contributor to Artforum, and his writings have appeared in the anthology Architecture and Authorship and the journal Grey Room. He is currently working on a book about the concept of reflexive modernism in postwar architecture.

The Club is also currently offering back issues of the Chicago Architectural Journal from 1993 to 2002 for sale.