Amazing Hulk to Vanish? MBC in line to get $6 million 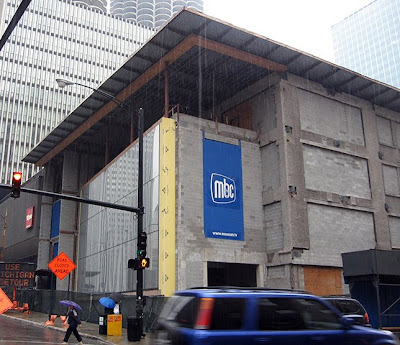 It remains unclear how far that $6 million will go towards completing the Eckenhoff Saunders Architects design. Pepper Construction now carries a mortgage (nyaah-ha-ha!) on the structure as a part of a deal made this part April over a 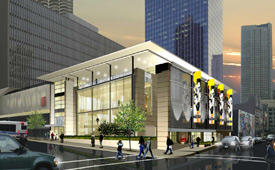 So I guess I shouldn't be expecting any solace this winter from one of those toasted cheese sandwiches from Johnny Rocket's, whose opening in the museum building was announced over a year ago. It was three-and-a-half years ago, just before everything ground to a screeching halt, that the curtain wall went up on the former parking garage at State and Kinzie, which we recorded in photo's here.

Bruce DuMont has a problem in that his museum is obsolete before it's been finished. There's probably more material available online for free than in the MBC archives. And I don't think all that many people are going to fork over $$$ to see some fragments from the Garfield Goose show along with the extant puppets.

This museum, however well-intentioned, is not going to attract visitors.

The Board of the museum should make plans to pay off the debt and put the property up for sale.