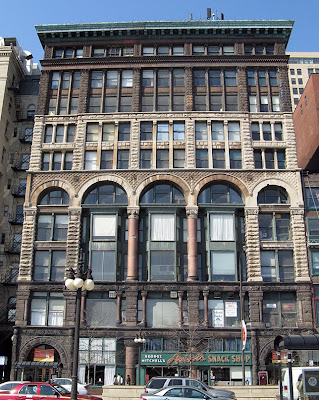 This whole historic preservation thing is more complicated than we thought. 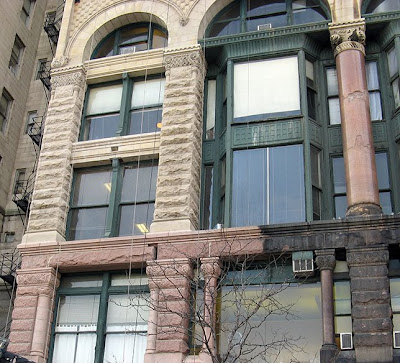 Take the case of the Fine Arts Building, acquired by real estate magnate Robert Berger in 2005, which sits on Michigan Avenue just north of Adler & Sullivan's Auditorium. In the latest stage of Berger's exterior renovation of the historic structure, stone whose color for decades could only be described as "grimy" is being cleaned, revealing delicate pink hues quite possibly not seen since the time of the building's 1885 opening. 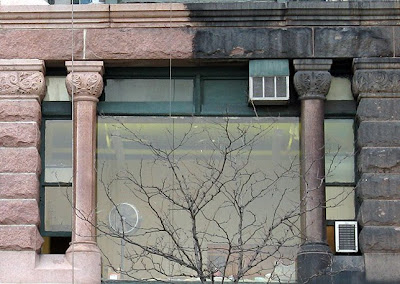 Another stab at authenticity has seen the removal of the George Mitchell's Artists Snack Shop sign, a festival of light that was Pop long before Pop was Pop. You can see it in all its lit glory here.

Obviously, the sign was not part of Solon Beman's design for the building, originally a showroom for Studebaker automobiles. Of course, the temporary replacement doesn't exactly say Fin de siècle Chicago, either. 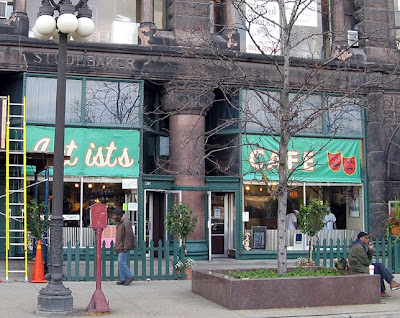 Which raises the question: what is preservation? Is it a meticulous return to the state of a building at the moment of its completion? Or does it leave some record of a structure's passage through time?

Of course, to get back to the beginning at the Studebaker, you'd have to lop off the top three floors - and their skylit studios - which Beman added in 1898 when the building became the Fine Arts we know today, and rip out the rehab of the theaters done by Andrew Rebori in 1917.

Truth be told, Beman's facade is what is often called, euphemistically, "quirky". It's a wedding cake building, without the setbacks, a festival of questionable proportions, with a two-story base, a squat, three-story body, a high two story arcade, topped by a newer two-story arcade, topped by its own one-story arcade. At the center are two stubby columns at ground level, topped by pilasters with toothpick columns on either side, topped by thick, two-story columns with Romanesque capitals sitting in front of windows and supporting a story of arched fenestration above. It's a work that inspires affection more than admiration. The Artists sign added to the amiable confusion by spanning only two/thirds of the central bay, further breaking up the tenuous symmetry.

The real splendor of the Fine Arts is in its interiors, and in the home they've provided to Chicago's artistic community for over a century. 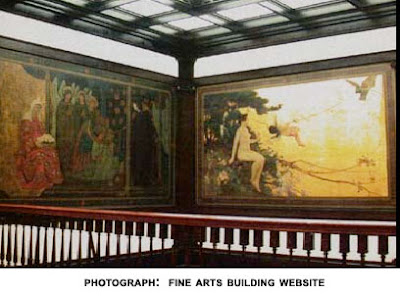 You can read all about the Fine Arts in a history created by the building's management here. Even better, according to the Building's website, this week on November 13 is one of the "Second Fridays" of each month when, from 4:30 to 9:30 p.m., you can take your own self-guided tours of the Fine Arts' glories.

I'm very excited to see the building clean, but they should have kept that sign which had clearly achieved significance in its own right. If they have to keep the Santa Fe sign on top of Burnham's Railway Exchange, how is this different?

And that sign was a definite draw - I know I went back there multiple times because the sign was so charming, even if the restaurant itself was iffy. Still, I never thought I'd see them clean it. Some preservationists would say leave it dirty because it's a record of the grimy Illinois Central, while others would say that the soot was corrosive to the stone. Anyway, with this and the Old Colony clean again, what loop buildings are most in need of cleaning? My vote is for the Board of Education building at Clark and Adams, and the deco skyscraper kitty-corner to it. They look really lousy next to the Federal Building.

On my very short list of favorite buildings - thanks for the focus on it.

Wait, is the sign coming back or not? I guess I'd care a little more if the restaurant weren't so awful.

Are the manually operated elevators still in service? When I was in college, loved going up to the sheet music store in one of them, the floors going by with the gate open as you ascended...

Your line, Lynn, "it's a work that inspires affection more than admiration" is right on. Unfortunately, the Fine Arts building lost some of its affection when the George Mitchell's Artists Snack Shop sign was removed. This sign certainly enhanced the quirkiness of this building in a positive way.

I can see both sides of the argument about cleaning the surface. In one way, the grime adds a certain charm. But at the end of the day it's still grime. So I'm fine with it being cleaned up.

The window box air conditioners really need to go. There's no charm there. They're an eye sore. They look cheap and junky. And they distract from the building.