A couple of Saturday's ago, they dedicated what's called the Printers Row' Park, a generous strip between Dearborn and Federal, between Polk and Harrison, just south of the Transportation Building. There was music, poetry and dancing, as you can see in pictures in the Chicago Journal's report here. 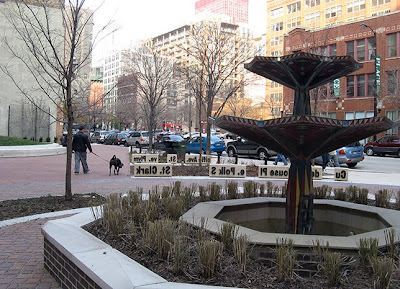 The most distinctive element of the park adorns the sides of the seating benches - segments of neighborhood street names in reverse type, a reference to the area's origins as the center for Chicago's printing industry.

To create the park, an existing fountain was retained, two cross driveways closed off, and a number of mature trees removed. Their replacements appear to be mere pups. The 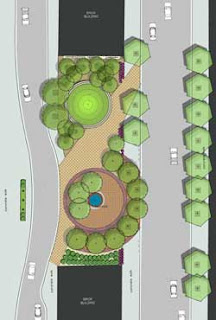 cusp of winter is a poor time to judge the quality of a landscape design, this one coming from Ernest Wong and the Site Design Group, Ltd. Right now things are looking more than a bit sparse, but come next spring, perhaps it will look a lot more like the original site plan.

A larger question is whether this place can really be considered a park - "an area of land, usually in a largely natural state, for the enjoyment of the public" - at all. Like the newly renovated Pritzker Park at Van Buren and State, paving dominates over lawn. And what there is of lawn is raised up within concrete curbs.

This is said to be a strategy to avoid contamination by dog leavings, which would appear to be confirmed at Printers Row by a green chalk inscription along the raised circular lawn's concrete rim: "This grass should NOT BE A DOG TOILET. LET PEOPLE ENJOY IT TOO!" As the inscription continued, the word "NOT" was effaced, leaving the words "GRASS ______ DOGGIE POTTY" below which one could see a smear that had every appearance of being what we called, when I was a child, "dog dirt."

When I visited the park this past Saturday, there seemed to be as many dogs as people. No violent confrontations were observed. 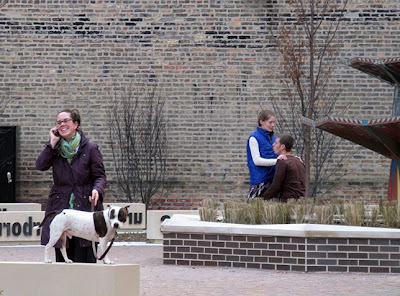 "Curb you dog" used to be enough. When you box up the lawn, you have what I found at Pritzker Park, also on Saturday. Pretty much everyone was sitting along the periphery, on the concrete edges along State Street. The rest of the park, except for the pigeons, was empty. Raising up and boxing in is apparently the perfect "keep off the lawn" mechanism, discouraging dogs and people alike. 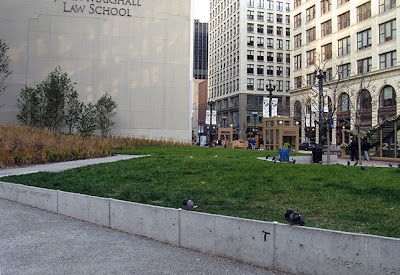 For nearly twenty years, dogs and people managed to co-exist, despite the usual conflicts, at the handsome park south of the AMA Building, an accidental greenspace created by John Buck as a placeholder for an office building he expected to develop on the site. Maintained by Buck for decades, it was a model of what a park in the middle of density could be. As River North grew up all around it, the trees growing into mature beauty, the park became an increasingly central civic resource, for both people and their pets. And, of course, the city rebuffed offers to purchase it, and sat on its hands while the only real greenspace in River North was destroyed for still another hotel. 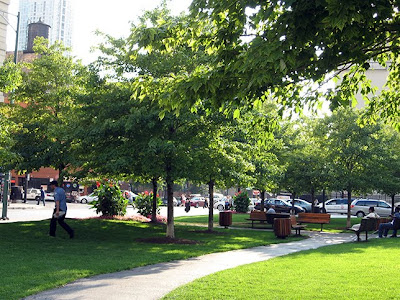 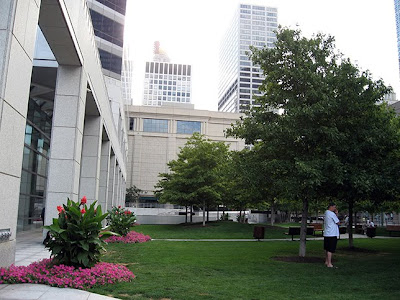 Nature wasn't in boxes at the AMA Park, nor is it at another splendid amenity, the landscaped plaza at One South Dearborn, a wonderful forest oasis in the heart of downtown density, where the greenery remains at ground level, protected by a smart use of seating elements. 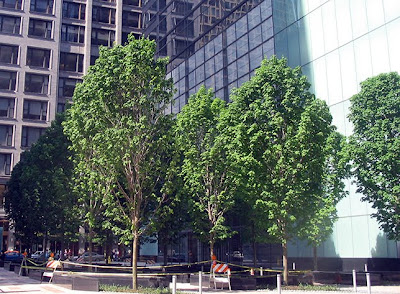 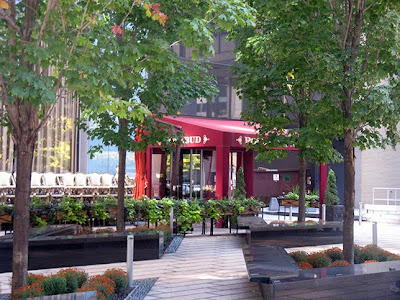 Contrast this to the new 353 N. Clark office tower. In an ever more dense River North that is parched for parkland, the opportunity to create an AMA-like amenity was rejected for still another trees-in-big-boxes design. What could have been a much-needed park became just another self-aggrandizing plaza. 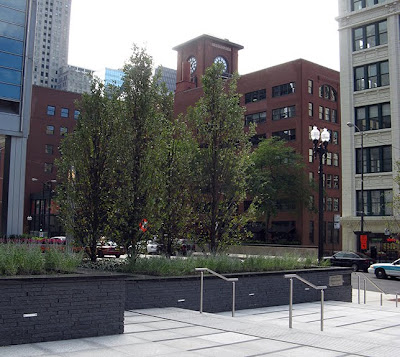 Maybe that should be rule number one: If you can't walk on the grass, it's not a park.

Great article. I totally agree that a "park" is a place to frolic in the grass. What would you suggest though for creating dog-friendly spaces in these areas?

I will always miss the park at AMA... It had a good amount of grass and a lot of mature trees...basically an anomaly in River North. I am happy with the landscaping at 353 N. Clark. They managed to plant a good number of trees and plus, the green roof is awesome too.

While I love the plaza at One South Dearborn for an elegant use of materials, I don't really see how it relates to the former AMA park. The AMA park was mostly a lawn, on a subtle grade between State and Wabash. The One South Dearborn plaza is primarily a hardscape, with "trees in big boxes" as you call them... much more similar to the 353 N Clark plaza, which you criticize.

Design isn't everything you make it out to be in terms of attracting people to a park space. It really has more to do with the demographics of the neighborhood, and the immediate surroundings. That's why turning every urban void into greenspace by default is a poor strategy, and why parks need to be sited strategically to be successful.