Chicago Streetscene: Waiting for the Frontera to open 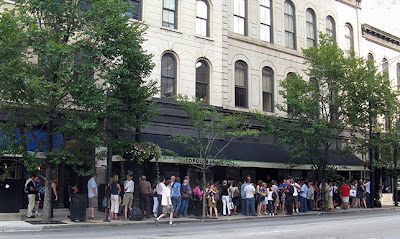 In 1987, chef Rick Bayless took the risk of opening a new kind of Mexican restaurant, with an emphasis on authentic dishes and ingredients, in an 1870's building of what was then a Chicago's skid row, when it was not unusual for Bayless to find a drunk sleeping it off in the doorway when he came in to open. Soon, Frontera Grill was a smash, and part of the bedrock that transformed a skid row into the thriving River North district. Bayless has gone on to create a restaurant empire.  With the recent opening of XOCO, it's expanded along Clark Street  all the way to another 1870's building at the corner. Next door is Topolobampo, which takes reservations, and then the original Frontera, which doesn't, upholding an original tradition.  So every day before five the pilgrims begin to line up.  I believe it's to qualify for the nightly lottery in which one lucky diner will win a solid gold 1917 Estados Unidos Mexicanos. Or maybe it's for the food.
(Click on time for permalink) 6:12 PM