The Limp Building: Lucien in Dali-land or The Persistence of Mediocrity

One of these things is not quite like the other . . . 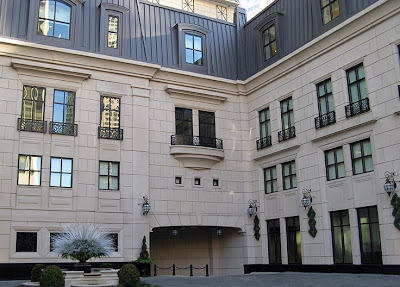 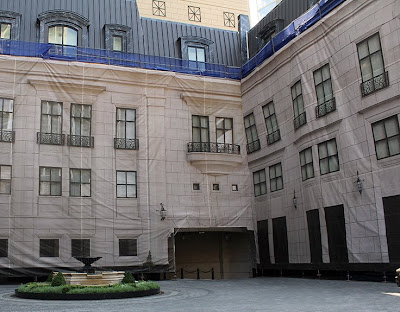 click images for larger view
can't quite put your finger on it ? . . . 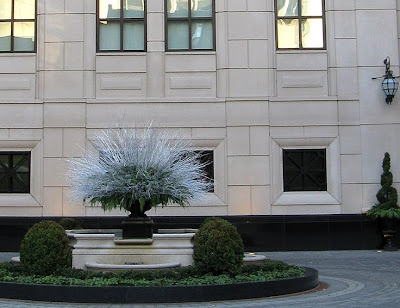 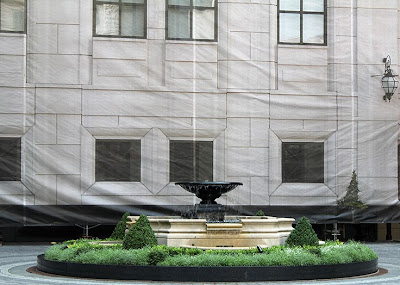 Lucien Lagrange, the Chicago architect who recently announced his retirement, built a fabulously successful career out of creating high-rise buildings in a stripped-down classicism that allowed his patrons the fantasy of living as royalty in the French Second Empire. 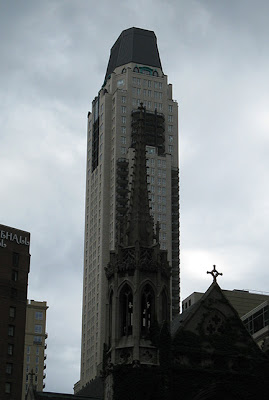 His ideas tend to be most coherently expressed, and gracefully detailed, at the base of his buildings, and to begin to fly out the window as a tower rises and he has to fit in all those ugly balconies that buyers seem to require.  His latest achievement is the Elysian, a 60 story hotel/condo tower that terminates in a massive, clunky metallic crest that looks like the cap on a stick of lip balm.  It's  heavy, vaguely Germanic feel almost seems to suggest that Lagrange wasn't really raised in the South of France, but in Alsace. 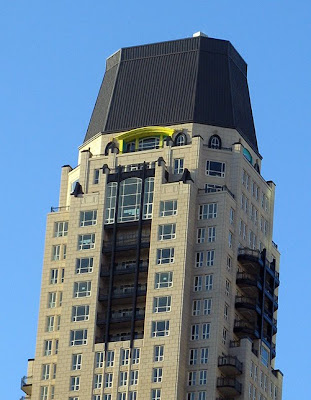 At the bottom is the Second Empire calling card, with a four-story pavilion along State Street with a Mansard roof would look a lot more convincing if it were executed in traditional tar paper rather than ribbed metal that makes it look like a Quonset hut.  Adjacent  is a full-up "carriage court" where limo's and sports cars can make their entrance with a backup of appropriate Parisian splendor.

A few weeks ago, the previously completed Mansard roof was encased in scaffolding - apparently some touch-ups were required to the original construction.  Now, similar rehab work is going on in the carriage court, and that's the source of the photo's you see above.  The usual ugly open scaffolding just wouldn't do, so the building has created fabric replicas of the facades to place over the scaffolding. 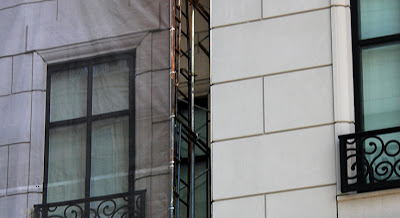 It's one of the trippiest architectural visions you're likely to see.  In it's emulation of a dead style, Lagrange's designs are already a fake.  So now, with the fabric hangings, we have a fake of a fake.  (Is it too much to hope that the irony was intentional?)  The way the hangings droop and crinkle, it's like the courtyard facades are melting under the heat of their own strained artifice.  Christo couldn't have done it any better.
It's not to be missed. Stop by Walton just east of State, and make up your own backstory. 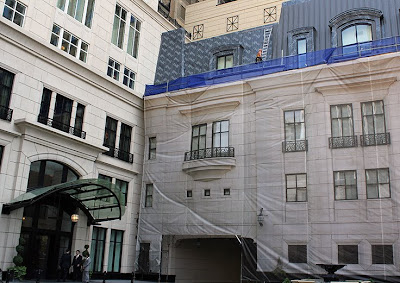 They do this all the time at Walt Disney World and Disneyland to cover renovations that a freely visible to guests during daily operations.

wow, they could have saved so much money up front with this curtain over a stucco facade

I've also seen this approach in Switzerland and in Quebec. It seems to be a French thing, maybe.

I saw this used during a 1998 visit to Venice, Italy. Right on St. Mark's Square, covering the front facade of the Doge's Palace, no less!

Those are photos of one building that's *disturbingly* mediocre, I agree.