Death in Venice: Who was Geo. H. Macomber and what's he's doing on the Chicago Athletic Club? 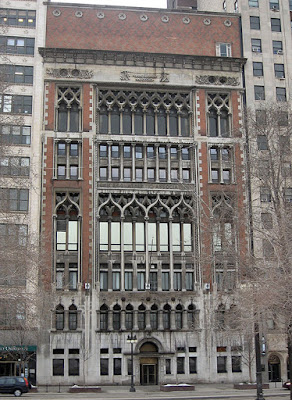 Once a playground of the city's elite, the Chicago Athletic Club had fallen on hard times by the time it announced it was shopping around its landmark building at 12 S. Michigan and an annex on Madison that had been added in more flush times.  Last year, the property was forced into foreclosure as a project to convert it into a hotel collapsed.

Today, the building is a faded curiosity on the Michigan Avenue streetwall, but in 1898, it was described as "a rival in grace and symmetry to the great Palace of the Doges on St. Mark's Square, Venice, and loses nothing by the comparison . . . The interior is magnificent and costly, every atom of material and every article of the equipment being placed with a thought to defy the ravages of time . . . " 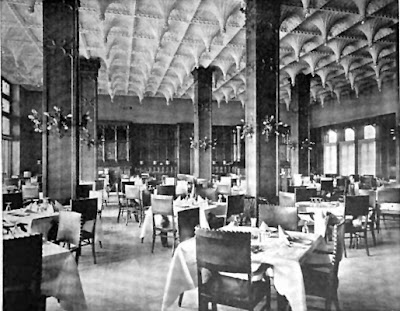 The 6,000 square-foot dining room was finished in "quarter oak . . . and overhanging all a stucco ceiling, with hundred's of drooping tips, studded with incandescents . . ." 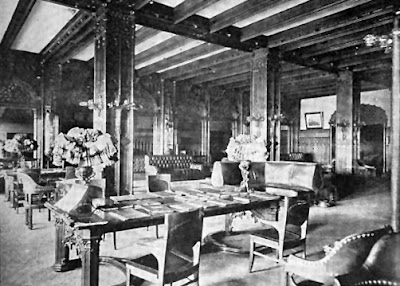 Att the time of its construction, the ten-story-high Club, designed by architect Henry Ives Cobb in a style that could said to be Ruskinesque Venetian, qualified as a an outstanding example of the new, fireproof steel-frame skyscraper.  Unfortunately, according to contemporary report, "the full efficiency of this fire-resisting groundwork was largely nullified by introducing large quantities of combustible materials . . ."  On Halloween night, 1892, a fire broke out in the two-storied, oak-paneled gymnasium on the 4th floor.  "The ceiling being attached to one-inch nailing strips, which were so fastened to the terra-cotta arch blocks as to leave spaces between the floor arches the paneling, in which air currents and flame could freely circulate." 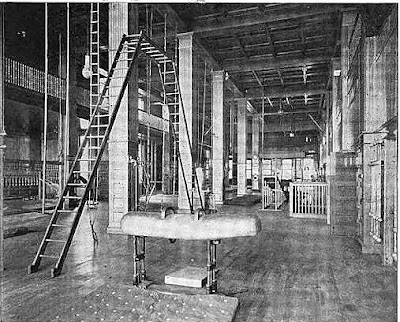 The flames burned through the oak paneling, burned up the wood strips that had inserted into the terra-cotta panels that were supposed provide structural fireproofing, causing the tiles to fall and exposing the steel columns to flame.  The wood with which the club was lavishly appointed throughout became the pathway carrying fire to the upper floors.  The pressure of water from the fire hoses was enough to knock off more of the terra cotta protection.  Still, all but two columns on the eight floor resisted deflection from the heat of the flames.  The tab for the damages was a then astronomical $200,000.  In the end, the building would cost $600,000 but it was still opened in July of 1893, in time for the World's Columbian Exposition. 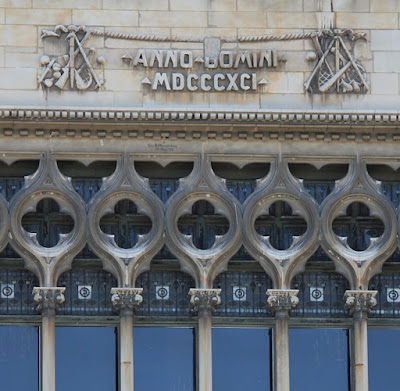 It was 1891, however, the year construction began, that was carved into the building's facade: Anno Domani MDCCCXCI.  Not far below, in small lettering invisible from the street, there's another inscription: 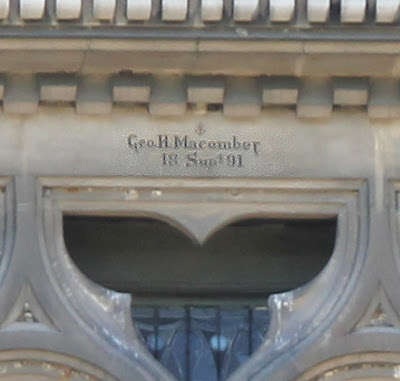 Who was Geo. H. Macomber, and why did he deserve this honor?  In 1902, he was listed as Second Vice President, George H. Macomber, George A. Fuller Company, a major construction contractor out of NewYork, which had its Chicago offices in the Marquette Building.  Perhaps he supervised the Club's construction.

The faded grandeur of the Club's facade is like the a dust, the sole surviving residue of the energy that once surged throughout this building, as Chicago's power elite gathered to dream, to plan,  to cut deals and an occasional throat, to conspire over the city's future and their personal ambitions, or maybe just get a rubdown and fall asleep, brandy and cigar in hand, in a club chair.

The husk is all that's left.  The husk, and a small, hidden tribute to a forgotten man once of great importance.

Very nice entry.
For all the Venetian bric-a-brac, the Athletic Club building still displays its frame, to my eyes at any rate. In this it is not so anomalous on the Michigan Avenue streetwall.
Orchestra Hall is the only building that doesn't reveal the underlying grid in its facade.