When the Cranes return to Clark and North 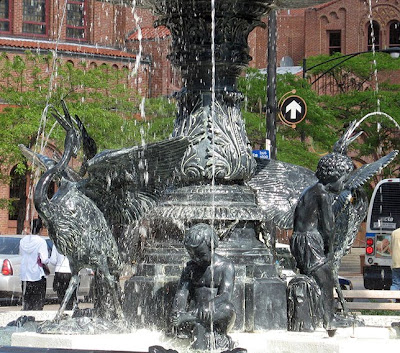 It's like the Chicago Children's Fountain couldn't catch a break.  Created in 1982 during the administration of Jane Byrne, it was fabricated on a small plaza isolated amidst rushing lanes of traffic along the south bank of the Chicago River.  When east Wacker Drive was reconstructed in 2001, the fountain was ripped from its moorings and unceremoniously stuffed under the Roosevelt Road Bridge, where it remained for four years.  In 2005, it was finally taken out of mothballs, and after a much needed  restoration, remounted just south of the Chicago History Museum.

Unfortunately, vandals and scavengers soon found the four spouting cranes at its base soon too much of a temptation to resist.  One by one the cranes disappeared - a while back I saw one of them splayed forlornly on its side, dangling from the metal bars that connected it to the fountain, before it, too, disappeared.  And there was one. 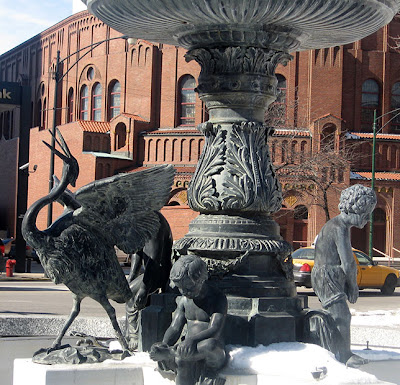 Now all four cranes are back, spitting exuberantly into the wind.  (Thank goodness they're not camels.) Let's hope they're now treated with a bit more respect, and maybe even a little enhanced security. 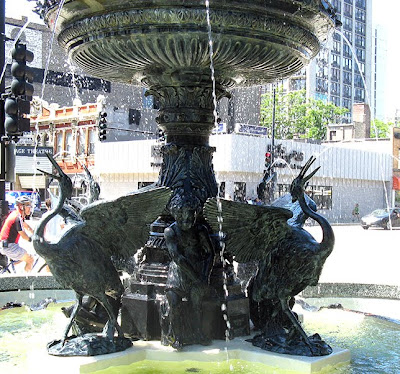 Next time you're up here Lynn, please stop by our office on the opposite corner to the cranes. We are ALWAYS here...
See you at PechaKucha soon?
Peter