You'd think that by October 12th, we would have everything there was to find about what's going on in October.   You'd be wrong.  We've just put up over half a dozen great additions to the October Calendar of Chicago Architectural Events.

From October 28th to the 30th, at locations including the Instituto Cervantes, the Graham Foundation, and the South Side Community Arts Center, there'll be a three-day symposium, Building Connections: Brazilian Design for Real Cities, which will include the participation of such architects, planners, and authors as Jaime Lerner, Carmen Vidal Hallet, Fernanda Barbara and Jorge Wilhelm.

Not yet maxxed out by benefits? Have $500 in your pocket? Can make your reservations by the 15th? The Architecture and Design Society of the Art Institute will hold its Modern Ball on Saturday, October 23rd,  in the new Renzo Piano designed Modern Wing, with dinner, cocktails, a video, and a live auction offering such morsels as a Chicago River tour with WTTW's Geoffrey Baer,  dinner with architect Dirk Denison at L20, and first-class sojourns to Hamburg and Berlin, New York and New Canaan, and Cap Martin, France.

If that's a little bit beyond your budget, there are plenty of free events to choose from.  This Friday, the 15th, there's a reception and lecture at the Extension Gallery at Archeworks for their new exhibition, Active Layer, an installation by Mason White and Lola Sheppard of the firm Lateral Office.

On Saturday, the 16th, there's a Chicago Architecture + Design Day at Hermann Hall, IIT, offering a college fair, admission and career workshops for students interested in Architecture, Interior Design, Construction Management, and Landscape Architecture programs.  It's part of Discover IIT Day.  On Wednesday, October 20, Michael Damore of Epstein Chicago will talk about their collaboration with Norman Foster on the expansion of the Frank Lloyd Wright-designed S.C. Johnson Campus in Racine, Wisconsin at the Häfele America showroom on Hubbard. 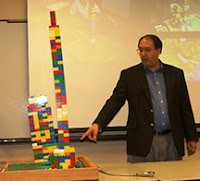 And if you have third-to-eighth graders with a budding interest in architecture and engineering, take them to the Des Plaines Library this Saturday the 16th for their Second Family Science Expo,  where they'll be able to get hands-on experience from structural engineers Chas Hague and Larry Novak, who will talk on High Rise Building Design and show an earthquake shake table testing the stability of towers made out of LEGO's™.   Also participating will be our tireless correspondent, engineer Bob Johnson, who gave a preview to ABC7's Linda Yu and Sylvia Perez. 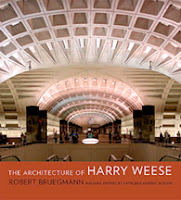 And that's just the new stuff. There's the Tribute to Bruce Graham this Thursday, plus the Design Evanston Awards, the Traditional Building Exhibition and Conference, the Council on Tall Buildings and Urban Habitat symposium at IIT, Julie Snow, Dana Buntrock, Robert Bruegmann talking about his new book on Harry Weese in Weese's Seventeenth Church of Christ, Scientist, and dozens of other great events. Check out the entire October calendar here.