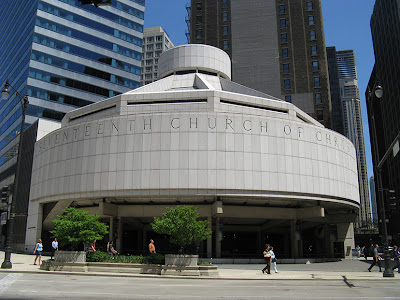 click images for larger view
Tuesday night, there was a bit of a revival meeting at the Seventeenth Church of Christ, Scientist.  At the pulpit, the Right Rev. Bob Bruegmann, co-author of the superb new book, The Architecture of Harry Weese, discussing the life and work of the great architect, planner and iconoclast who died at 83 in 1998, designer of  the very auditorium in which the roughly 600 acolytes now happily congregated. 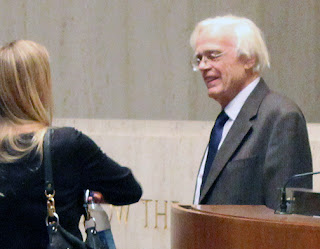 Bruegmann was introduced by Ben Weese, Harry's youngest brother, and a distinguished Chicago architect both in his long collaboration with Harry, and with his own firm. 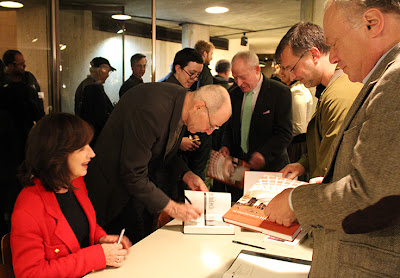 The Architecture's co-author Kathleen Murphy Skolnick provided an overview of the Church, and the two authors signed copies of their books after the lecture. 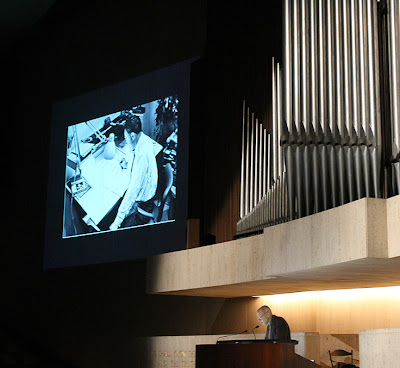 Even if you knew the story, there was something bracing in again making the acquaintance of Weese's iconic buildings, his fervent crusades - from saving the Auditorium, to creating Printer's Row, one of the first beachheads in the back-to-the-city movement - and the vivid trajectory of a life epic, antic, tragic, impassioned and inspired, portrayed in a succession of striking images projected on the back wall of the handsome, modernist sanctuary that has no pews, only plush seating that would be the envy of a Broadway theatre.

The benediction came during the Q&A session after the lecture, when a member of the audience suggested that all the architects in attendance who had at one time or another worked for Harry Weese stand up.  It felt like half the audience rose.  And even if the photograph below would indicate the percentage was perhaps slightly less,  it still proved in moving fashion that the famous inscription  memorializing Christopher Wren holds true not only for buildings, but for the lives a person touches: Si monumentum requiris circumspice. 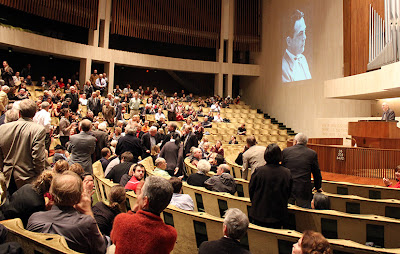 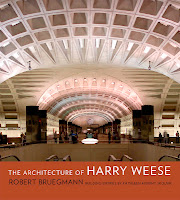 I've previously discussed The Stormy Life and Magical Architecture of Harry Weese here, and Weese's wonderful River Cottages here.  I bought my copy of the Bruegmann/Skolnick book at the Chicago Architecture Foundation's fine bookshop, whose website, inexplicably,  does not have it among the paltry eight titles listed.  If you need to order on-line, I'd recommend you get it from William Stout Architectural Books.  The Architecture of Harry Weese is an invaluable book that anyone who loves architecture will want to add to their library.