And the hits just keep coming.  Just added to the October calendar of Chicago Architectural Events:

This coming Monday, October 11, trend forecaster/provocateur David Shah will kick off the School of the Art Institute/AIADO's Mitchell lecture series, with a talk on Design in a Time of Change, 6:00 p.m., in Fullerton Hall.

On Wednesday the 6th (make your reservations by noon today), UIC's Robert Bruegmann will talk about The Rise and Fall of Public Housing: An International Perspective, followed by a tour of the site of the National Public Housing Museum, one of a series of five lecture/tours this month that will feature such people as Little Italy's Peter Pero,  great-granddaughter of Ida B. Wells Michelle Duster and City Design Center's Robert Feldman. 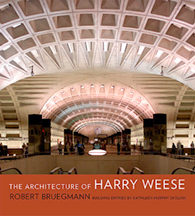 On Tuesday, the 26th, Bruegmann is back at a Graham Foundation event held in Harry Weese's dramatic Seventeenth Church of Christ, Scientist, talking about the new book he's co-authored with Kathleen Murphy Skolnick, The Architecture of Harry Weese.   This first monograph devoted to Weese's work has just been published.  I'm making my way through it now, and it's a worthy successor to Bruegmann's 1997 The Architects and the City: Holabird & Roche of Chicago, 1880-1918.  Along with a recent profile of Weese by Robert Sharoff in Chicago Magazine, it's jump-starting what looks to be a renewed appreciation of one of Chicago's most creative architects.

There are over 60 great events still to come on the October calendar.  Check them all out here.

And speaking of great Chicago architects, while we don't usually list tours - there's just too many of them - I did want mention a one-time only tour that's part of Docomomo North American Tour Day for 2010, Architecture in the Round:  the life and work of Bertrand Goldberg, a bus tour co-sponsored with the Chicago Architecture Foundation, from which it departs at 12:30 p.m. this Saturday, October 9th. The tour takes in four of Goldberg's designs: Marina City, the Hillard Homes, River City, and the endangered Prentice Hospital (just don't try to take pictures of it.) $38 per person; $33 seniors/students; $33 CAF members, 3.0 AIA Continuing Education Credits. Registration and information on-line.

Email ThisBlogThis!Share to TwitterShare to FacebookShare to Pinterest
Labels: Architecture in the Round, Bertrand Goldberg, David Shah, Design in a Time of Change, National Public Housing Museum, Robert Bruegmann, The Architecture of Harry Weese