How many of you saw it? Awesome Patrick Stewart/Kate Fleetwood Macbeth on PBS Wednesday night - soon on DVD 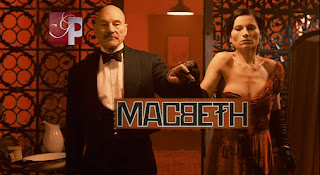 I'm astounded there wasn't more promotion on this; I just happened to stumble across last night's 9 p.m.  premiere on WTTW of the film version of 2007's acclaimed Patrick Stewart/Kate Fleetwood production of Macbeth that one London critic hailed as the "The Macbeth of a lifetime."

Both the original stage production and film were directed by Rupert Goold, setting the play in an imagined Stalinist society of the mid 20th-century, a conceit that could easily have become a gimmick, but in this production's specificity of detail only heightens the immediacy of the drama.  What was a single-set as a play has been opened up to use a visually stunning array of found locations, including a decaying, glass canopied cloister that co-producer John Wyver noted would probably have cost over $100,000 if it had been created as a set. 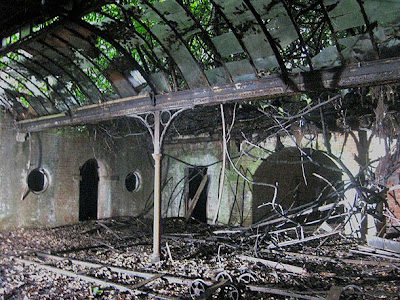 The film was shot in wide-screen HD using a pair of the fabled RED digital cameras by cinematographer Sam McCurdy, perhaps best known for bringing creep-out visuals to such horror films as The Descent and Dread.  That style proves an embracing fit for the fear and loathing world of Macbeth, even if some of the visual tricks sometimes seem like a crib from a Mark Romanek music video, especially one scene where the three witches are portrayed as un-Florence Nightingale-like angels from hell.  (Which will no doubt be appropriated in commercials for the next campaign to dismantle nationalized health care.) 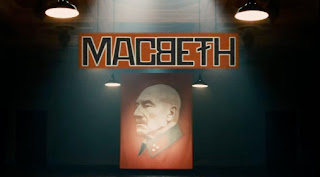 Part of what gives the production its power is how it gains an incredible intimacy through setting some of the play's most intense scenes in the family kitchen, including Lady Macbeth steeling her husband's resolve to murder Duncan as she retrieves the dessert cake from the fridge to serve to the party of the soon-to-be martyred king in the adjoining dining room, or, most famously, the scene were Macbeth instructs the two men he's enlisted to murder Banquo as he makes cheese sandwiches.

None of this would be worth much is there weren't two extraordinary performances at the core.  Kate Fleetwood's Lady Macbeth is beautiful, seductive, brittle.  Patrick Stewart's performance as Macbeth is the zenith of a long, varied, and distinguished career.  Stewart's strength has never been in an actor's flamboyance, but rather, in a rock-solid centering of the character in the Spencer Tracy mode.  You can't just sit back and observe impassively.  Stewart draws you in: you know this man; more to the point, you begin to feel that, in different circumstances, you could be that man.  You begin to experience the action of the play as if you were in his skin.  You feel what, in our modern times, has become an increasingly elusive sense of the tragic.  Like Oedipus after questioning the messenger, Stewart's Macbeth has just enough self-awareness to realize how he's allowed himself to be trapped.  He sees how fate has plotted his end, but he must play it out, even if he already knows the dread conclusion. 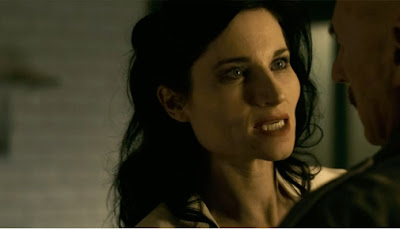 Love is a battlefield, Pet Benatar has told us, and this Macbeth is a very warped love story, indeed. Fleetwood's Lady Macbeth is the ultimate trophy wife, much younger than her husband, inwardly unnerved by the intimations of his mortality to the point of projecting her lust through him and past him, into a carnal craving for blood and power that Macbeth, when we first meet him, has buried deep within himself beneath a mask of amiable soldierly loyalty.  Like Macduff ripped from his mother's womb, Lady Macbeth reaches into Macbeth's entrails and pulls these dark longings back to consciousness.  Entwined scorpions, the Macbeths reinforce each other's venomous cravings.   They give birth to their crimes in primal embrace, only to be condemned to live out the annihilating consequences apart, and utterly alone. 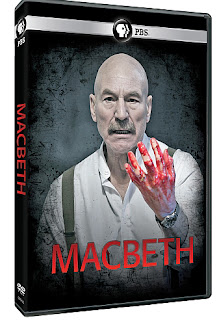 This is a rare case where a landmark theatrical production has not only not been ruined by its translation into another medium; in many ways, it's been enhanced.  The raw theatricality of a live performance is, of course, missing, but the skill with which Goold opens up the play actually helps to ground it and give a visceral presence.  You're not in row K listening to actors project; you're inches from a character's face, leaning in to hear their whispered confessions.

I was blown away by this production.  If you missed it - and given the lack of fanfare, that's a good possibility - the DVD goes on sale October 19th, and it's only $19.99.  If this were a theatrical release, Macbeth would be one of the best films of the year, laden with Oscar nominations.  As it is, it's transformed the term "direct to video" from a epithet to a bloody wonderful gift.

Many thanks for such a great response - it's terrific to get a thoughtful and really positive review.
John Wyver, co-producer, Macbeth