Marilyn Monroe and JFK's birthday. This is the way the world ends: not with a bang, but with dessicated sugar 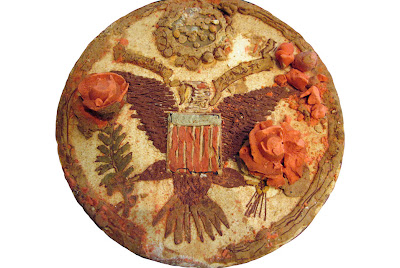 I am riding on a limited express, one of the crack trains of the nation.
Hurtling across the prairie into blue haze and dark air go fifteen all-steel coaches holding a thousand people.
(All the coaches shall be scrap and rust and all the men and women laughing in the diners and sleepers shall pass to ashes.)
I ask a man in the smoker where he is going and he answers: “Omaha.”

A long time ago, when it was only two hours long, the first hour of NBC's Today show was broadcast live in Chicago, followed by the first hour.  This was made necessary by the time difference between Chicago and New York; it was made possible by the quality of videotape, which made a live broadcast and a rebroadcast visually indistinguishable.  This is why I have a great love for old videotape in pristine condition.  An event as much as half a century in the past has a raw immediacy.  It looks like it's happening know.  The strikingly different decor, fashions, and personalities may give things a slightly weird vibe, but otherwise it looks exactly the same as if it were a live news report today.  Videotape is the visceral idiom of the here and now.

Film, on the other hand, distances the past.  We experience our world in color.  A film in black and white abstracts that experience into a subset presence.  When the film goes soft and blurry through age, the events it depicts become less a historical record than a kind of dream.

This blurry film - apparently the only one to survive- has exactly that dreamlike state.  Little more than a minute long, its montage, from the standpoint of today, takes on an almost Godfather-like narrative.  There's Marilyn Monroe, perhaps best remembered for playing the big band chanteuse Sugar Kane in the classic Billy Wilder comedy, Some Like it Hot, singing Happy Birthday to President John F. Kennedy at a 1962 celebration in a Madison Square Garden in New York packed with 15,000 guests, everyone from Jack Benny and Henry Fonda to Jerome Robbins, Ella Fitzgerald, Jimmy Durante and Maria Callas.

Monroe begins haltingly, as if almost paralyzed with stage fright, a quality that seamlessly morphs into the slow, sultry purr that has made the performance infamous.  The song is brief; we see a huge, towering cake being borne through the crowd by two bakers.  Just behind the podium, Monroe exhorts the audience to join in an orchestral reprise of happy birthday.  She leaps into the air, her arms gesture in emphatic, desperate, almost defiant strokes.

We see the young, handsome President stride down the aisle to riotous applause, skip up the stairs to the stage, and stride confidently to the podium, where Monroe now, in an instant, has completely disappeared.  When Kennedy quips that, "I can now retire from politics after having Happy Birthday sung to me in such a sweet, wholesome way," he turns back as if acknowledging Monroe, but she has vanished into thin air. 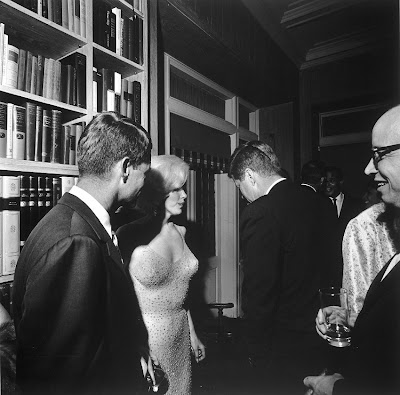 image source: Wikipedia.  click for larger view
The photograph above was taken after the party at Madison Square Garden.  Despite numerous encounters between them, it is the only known photograph showing Monroe with either of the Kennedy brothers.  The Secret Service was charged with making sure no such images ever saw the light of day, confiscating the photo's, including invading the dark room of White House photographer Cecil Stoughton after he took the shot you see here, which survived only because it was overlooked in a dryer.

In the picture, John F. Kennedy is looking away from Monroe.  He had had a brief affair with Monroe that past February.  For him, it was just another in his string of conquests, but Monroe became obsessed, repeatedly contacting the White House and trying to re-establish contact.  Like Tom Hagen being flown to California to "request" a favor of producer Jack Woltz, Bobby Kennedy was dispatched to Hollywood to tell Monroe to stop calling the White House.

Little more than two months after the birthday affair at Madison Square Garden, Marilyn Monroe died of a drug overdose.  On November 22nd the following year, John F. Kennedy was assassinated in Dallas.   The murder of the country's most powerful figure was a shock to the system of unprecedented force - the last assassination of a president - McKinley's - went all the back to 1901.  Few had personal memories of such an event, and there had been no radio or television to  transmit each new, dreadful detail as it happened, to every corner of the nation.

Kennedy's death marked the United States' long descent down a rabbit hole of chaos and violence that would become the 1960's, culminating in the murderous fever of Vietnam, the killings of Robert Kennedy and Martin Luther King, and a spinning out of control that would see Chicago, during the 1968 Democratic convention, blister between anarchic provocation and brutal repression, and a wave of riots across America that set city after city ablaze. 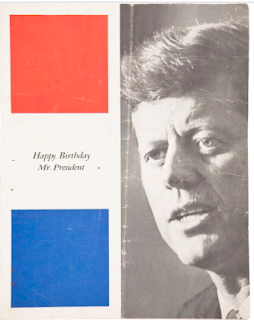 The Kennedys and Monroe have all turned to dust.  To most Americans alive today, the past they lived is no longer a shared experience.  It survives only in books, photographs, blurry film and memorabilia.  The rhinestone encrusted dress Monroe wore - not white, as it appears in the photographs, but flesh-colored pink - sold in auction in 1999 for over a million dollars.  A print of the photo Stoughton took after the 1962 party - one of only 10 surviving - was expected to bring in $23,000 when it, also, was put up for auction earlier this year.

Which leads us to the photograph at the top of this post.  This one last artifact - whimsical, unsettling, obscene.  The Presidential Seal rendered as a decoration for that giant cake we saw in the film of the 1962 Madison Square Garden event.  It is being auctioned off at Heritage Galleries at their Dallas headquarters, about a mile from the site where John  F. Kennedy died, on November 17th, five days before the 47th anniversary of his assassination.  The pre-auction estimated price is $5,000.

It's part of a lot of items assembled, as described in the press release,  "to mark the 50th anniversary of his 1960 election, including treasures such as a gold presentation watch worn by JFK throughout the campaign, and what may well be the only example of Kennedy's trademark rocking chair to come with an authentication from the Kennedy family."

The Presidential Seal decoration "is being offered by the family of decorated New York Police Department Detective Patrick "Patty" Larkin. Larkin, who was working security detail the night of the event, took a shine to the piece, and was in the right place at the right time to get it out of MSG and back to his home, where it has been for the last 48 years."  Larkin's widow notes:

It was not preserved in a spirit of reverence, however, but merely a curiosity the family shuffled from residence to residence over the years, occasionally taking it out on Thanksgiving or St. Patrick's Day to get a laugh or an astonished shake of the head from friends.

". . . this delicate creation, nothing but so much sugar, really," is how Heritage Galleries' Tom Slater describes it, but somehow, to me,  it seems more like  a prop from some mutant version of Shakespeare's Macbeth.   The stuff that nightmares are made of.
(Click on time for permalink) 4:43 AM