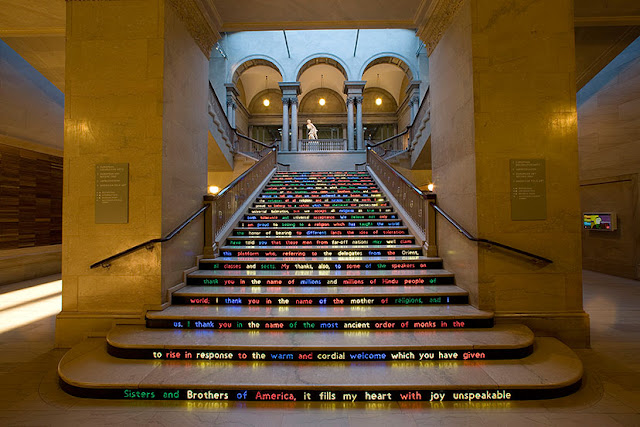 click image for larger view
Postscript, March 8, 2017:  Over six years ago, when this exhibition took place, who could have imagined the kind of nightmare world  we today find ourselves in, with the kind of fanaticism, xenophobia and authoritarianism that had been kept in the shadows for so many decades now seemingly in full control of the United States government.   Perhaps a new Parliament of the World's Religions should be reconstituted in Chicago, for never has the message of Swami Vivekananda been more needed to be heard.

[October 3, 2010] Through January 2 of next year, the sedate grand staircase of Chicago's Art Institute has been transformed.  The black backgrounds of its risers have burst worth with strips of lettering in day-glo colors.  The bright LEDs that subvert the abstract classicism have been compared by Robert Venturi  to temple hieroglyphics, "where the sparkle of pixels can parallel the sparkle of tesserae and LED's can become the mosaics of today [creating] an architecture that embraces human dimensions over those of abstract expression--that celebrates the beginning of an age of virtually universal literacy and embraces meaning over expression." 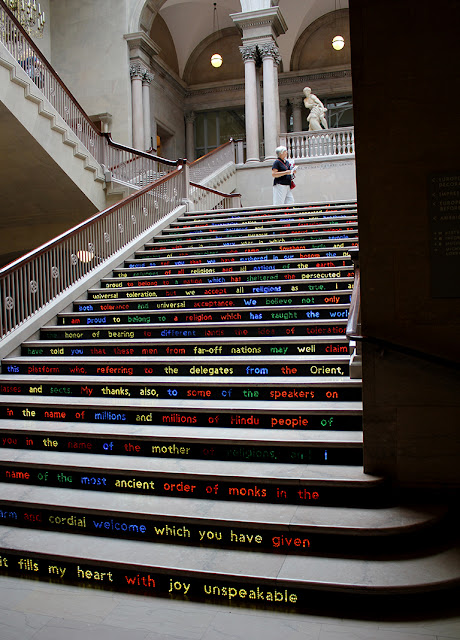 The installation at the Art Institute, Public Notice 3, is the work of the Mumbai-born artist Jitish Kallat, and it draws on a historical synchronicity. 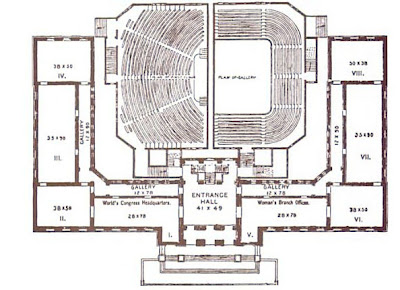 In 1893, the Art Institute building, then home for the World Congress Auxiliary of the World's Columbian Exposition, hosted a 17-day Parliament of the World's Religions.

To east of the grand staircase, two large, 3,000-seat auditoriums, the Hall of Columbus and the Hall of Washington, had been erected where galleries now stand. On the Parliament's opening day, the platform of Columbus Hall was filled with dignitaries from "almost every national and every religion . . . The big oak doors of the Art Institute were besieged by visitors as early as 9 o'clock eager to secure seats in the auditorium or gallery . . .  when the doors were thrown open there was a wild scramble to gain access to the body of the hall."

Several times throughout the day's session, a young Hindu monk from India, Swami Vivekananda, declined invitations from the podium to speak.  "My heart was fluttering and my tongue nearly dried up; I was so nervous, and could not venture to speak in the morning.  All were prepared and came with ready-made speeches.  I was a fool and had none . . . I who never spoke in public in my life."

Late in the afternoon, at the chairman's insistence, the Swami Vivekananda rose.  A rapt silence descended on the hall.  "Sisters and Brothers of America," he began, and the room erupted.  It would be several minutes before the applause and cheering subsided and the Swami could deliver his speech, which included these words:

Sectarianism, bigotry, and its horrible descendant, fanaticism, have long possessed this beautiful earth. They have filled the earth with violence, drenched it often and often with human blood, destroyed civilization and sent whole nations to despair. Had it not been for these horrible demons, human society would be far more advanced than it is now.  . . .  I will quote to you, brethren, a few lines from a hymn which I remember to have repeated from my earliest boyhood, which is every day repeated by millions of human beings: "As the different streams having their sources in different paths which men take through different tendencies, various though they appear, crooked or straight, all lead to Thee."

I fervently hope that the bell that tolled this morning in honor of this convention may be the death-knell of all fanaticism, of all persecutions with the sword or with the pen . . . 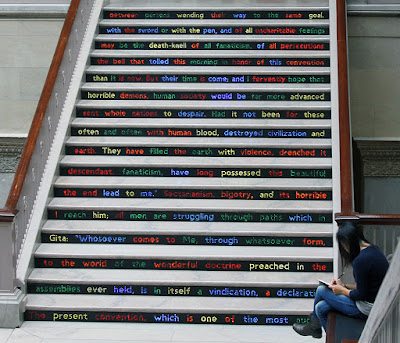 On the exact same day, September 11, one hundred and eight years later, the hijacked planes crashed into the Twin Towers.  Over the intervening century, the Swami's fervent hopes have been confounded by a unyielding parade of what Voltaire called "the heroic butchery."  Christians murdering Jews, Muslims Hindu's, Hindu's Muslims, in variation and explication across geographies, religions, and sects, all in the name of the one true God. 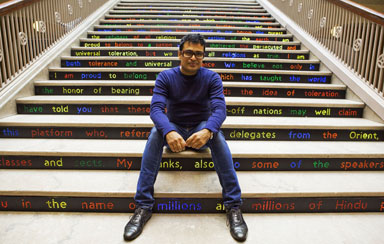 So back at the Art Institute, the colorful light show winding cheerfully through that stately, self-satisfied stair is actually the full text of Swami Vivekananda's brief address.  And the significance of the colors?  Jitish Kallat explains:


Now his speech is illuminated, conceptually and actually, in the threat coding system of the United States Department of Homeland Security. I find it interesting how the advisory system co-opts five colours from a visual artist’s toolbox into the rhetoric of terror, by framing them as devices to meter and broadcast threat (much like its predecessors, the British BIKINI alert state and the French vigipirate). Treating the museum’s Grand Staircase almost like a notepad, the 118 step-risers receive the refracted text of the speech. I see Public Notice 3 as an experiential and contemplative transit space; the text of the speech is doubled at the two entry points on the lower levels of the staircase and quadrupled at the four exit points at the top, multiplying like a visual echo. 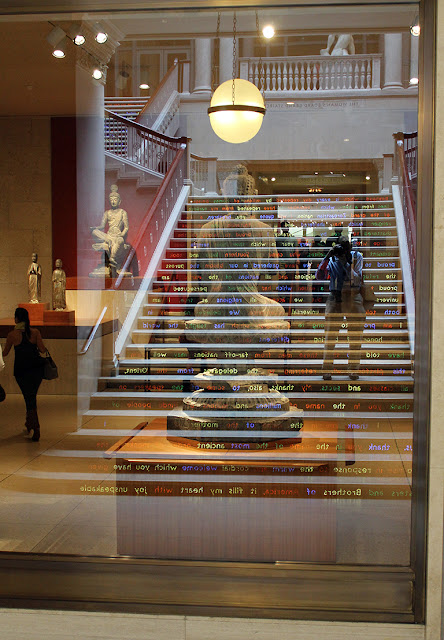 Don't miss this piece. It's quite impressive in multiple ways.

While growing in India, I knew nothing about the World's Columbian Exposition, but The World Parliament of Religions, was a part of my school text. In fact that was one of the few thi...ngs I knew about Chicago, apart from the nickname"Windy City" and of course Oprah Winfrey.. I loved the text-based light illumination. I think it looks beautiful..

When I was coming to Chicago, so many people talked to me about this place where Swami Vivekanand gave his famous "Ssters and Brothers in America" speech...

I had written about this some days back..
http://chicago-outdoor-sculptures.blogspot.com/2010/09/art-institute-of-chicagopublic-notice-3.htmlSee More

It is an absolutely brilliant piece. I was telling a friend from NY that if there was a 'Global Art piece of the year' to be chosen, this is it.
Also heard Kallat delivered a gripping lecture at the opening which I missed as I've been in London mostly.

I recently discovered this event, but from another point of view -- researching the influence of Swedenborg on Daniel Burnham I found that a Swedenborgian, Charles Bonney, initiated and managed the Parliament.
http://www.swedenborgcenter.org/early.html
But this article, somehow, makes the Parliament, the Art and the Morality fresher and more relevant than I could have imagined. Nicely done.

I couldn't have said it better myself - I did a post on this in my travel blog, and had to link your blog to my site! Very cool sight to see.