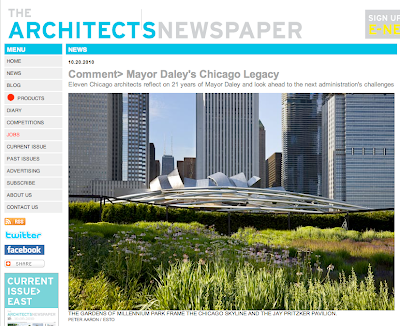 Robert E. Thomas and Alan G. Brake of The Architects Newspaper asked eleven of Chicago's best architects "to reflect on Daley’s impact on the city’s architecture, planning, and landscape, and to ponder the challenges facing the next mayor."  You can read the results here.

To be fair, the responses were restricted to the length of little more than sound bites, and how the piece was edited could have heavily effected how opinions were places and shaped within it, but for 11 of the most brilliant minds in the city to come up with such a vacuous pile of platitudes makes, at least for me, some highly dispiriting reading.  It's so soft a marshmallow would be jealous.  We even see the mayor being credited with helping the city lose its association with Al Capone, the vampire mobster previously claimed to be killed off by everyone from George Solti and the CSO to Michael Jordan.

According to the responses, Mayor Richard M. Daley's over two decades in power resulted in not a single negative worth mentioning.  The closest we come is Carol Ross Barneys comment, "The jury is still out on housing and the airport."  Mostly, it's the kind of eulogizing you find at a funeral of a guy who was so intimidating in life that the mourners fear an unkind word might cause him to leap out of the coffin and strike them dead. 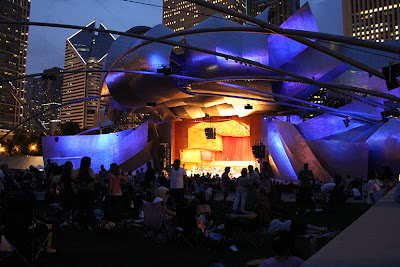 click images for larger view
Not that the Mayor's accomplishments that were mentioned fail to impress.   Millennium Park, of course, comes up.  It is, without a doubt, a triumph for which Richard M. Daley deserves some of the credit, but also a lot of blame.  Not mentioned are the cost overruns due to rework caused by city bureaucrats racing to fulfill the mayor's whim to get a new park up and running by the start of the new Millennium (hence the name, in case you wondered), overruns that in one of his famously crabby press conferences the Mayor, whose allergy for accepting responsibility was a mainstay of his reign, angrily tried to palm off on Frank Gehry.

That aside, the Mayor's greatest contribution to Millennium may have been in starting the ball rolling and then getting the hell out of the way when Cindy Pritzker's took charge and enlisted Frank Gehry to design the bandshell,  jump-starting a chain of events that would see Jaume Plensa, Anish Kapoor, Kathryn Gustafson, Piet Oudolf, and Robert Israel enter the mix to transform what would have been a pleasant public space into an international sensation, a process made possible by the leadership of Ed Uhlir, the incredible fund-raising of John Bryan, and the hijacking of funds from the TIF district across the street. And yet it's always "Daley's Millennium Park"  Was there not even a cook in his army? 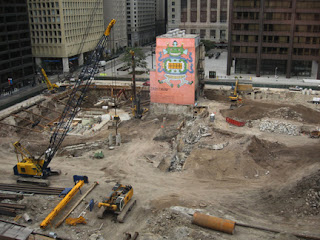 For nearly two decades, Richard M. Daley was unable to get Block 37, one of the city's most critical pieces of real estate, beyond anything more than a dirt-surfaced vacant lot, and when development finally came the results fell far short of expectations, dominated by a troubled shopping mall that has been placed in receivership.  Far more importantly, over a quarter billion dollars sits buried at the bottom of Block 37 in a "Superstation" that was shut down before it could ever open, left uncompleted because no one could see where the cost overrruns would end.

In any other city, that kind of scandal would have run a mayor out of office.  In Chicago, the city of silence, it was never even a blip on the radar.

The Superstation from Hell was just a subset of a far larger scandal, the massive TIF scam, which siphoned off billions by designating Chicago's wealthiest districts as economically challenged while leaving the city's most desperate neighborhoods to stew in their own juices.  An architect recently wrote to me defending TIF's as making viable projects perceived as economically marginal, neglecting the fact that most projects are designated marginal for a very good reason - they are marginal.

How much  was  Chicago's housing collapse exacerbated - and the recovery delayed -  by the wild overbuilding of new condo projects subsidized/encouraged by TIF's?  How much was any comprehensive, co-ordinated, city-wide planning process eviscerated by the way TIF districts balkanized the city, carving up revenues and spending into a hundred individual fiefdoms?

The next mayor of Chicago faces a financial abyss because Richard M. Daley essentially punted the city's financial crisis to his successor, buying himself time by selling off assets - in the case of the parking meter leases, at fire sale prices - for 75 years or more, stripping the revenues within just several years to keep his administration afloat, while leaving three future generations of Chicagoans holding an empty bag.  Where will the money come from to fund Chicago's future?

This is a mayor who arrogantly fought to force a favored heiress's private museum into the city's front yard, the same Grant Park zealously defended by A. Montgomery Ward, and who sought to silence all opposition by smearing dissenters as child-haters and racists.  This is a mayor who illegally sent bulldozers to tear up the runways at Meigs field in the middle of the night so he could seize the site.  (And you wonder why Chicago still has an Al Capone reputation).  This is a mayor who frantically and recklessly demolished Chicago's irreplaceable Bauhaus legacy at Michael Reese Hospital for an Olympics that would never be, leaving another gaping open wound in the heart of the near South Side.  (Or as Blair Kamin calls it, the new Block 37)  How can you preserve and rebuild a great city on a single man's whims? 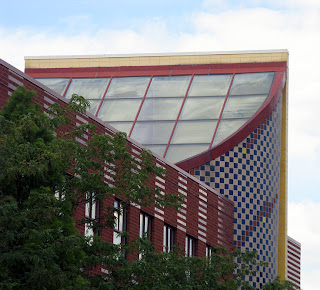 The irony, of course, is that the eleven architects surveyed by The Architects Newspaper have been pretty much frozen out of major projects sponsored by the City of Chicago and its agencies.  In Cesar Chavez and Little Village, Carol Ross Barney's created some of the Chicago Public Schools' best new buildings, but she hasn't been involved in any of the newest schools.  She's recently designed an award-winning library for Champaign, but has had no library commissions in Chicago since the 1990's, and her redesigns of CTA Brown Line stations were severely compromised by  cutbacks.  John Ronan builds schools that have received national praise, just not for the CPS.  Studio/Gang's handsome new pavilion for the South Pond Boardwalk had the Lincoln Park Zoo as the client, not the city.

What has been built over the last decade, in my view, has often been extremely mediocre, as in the faux Prairie styled libraries that have gone up across the city.  Until Millennium Park came along, the Mayor had a reputation, after being smitten by Paris, for favoring traditional design.  How true this was we may never know, but it certainly traveled down the bureaucratic food chain, stifling innovative design.

I have been noticing, however, some solid work from smaller, less known firms, such as GREC Architects recent Engine Company 18, 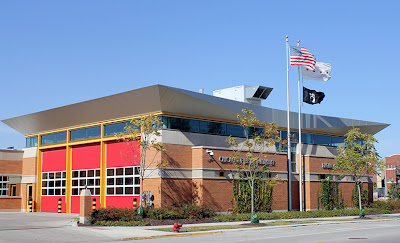 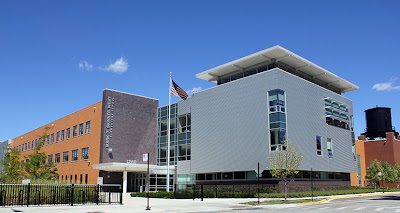 Designs such as these enrich the urban fabric, and provide the kind of visual anchors that give a neighborhood a distinctive, inviting character.

Mayor Richard M. Daley has a deep, passionate love for the City of Chicago.  That is undisputed.  His accomplishments are many:  Stability? Absolutely.  While the rescue of the Chicago Theater has proved something of a financial sinkhole, his bet on subsidizing the restoration of the Loop's other great surviving theaters - the Oriental, the Palace, the Schubert - as well as the new Goodman, has paid off big time,  beyond even what he might imagined.

Unattractive, if not downright scary neighborhoods all along the periphery of the Loop and beyond have become thriving, revived communities.  I could do without some of that infamous metal fencing, but I'm not among those who disparage Daley's efforts to bring more flowers and landscaping to the streetscapes of Chicago.  It's easy to see it as marginal, but it's like Rudy Guliani's broken window theory - a street that is clean, well maintained and attractive even looks safe - it's one of the best investments you can make for reviving a neighborhood.

We can learn much from all that things Richard M. Daley did right, but only if we also look unflinchingly at all the things that went off the rails, and why.  Silence is not an option.

In The Architects Newspaper piece, Clare Lyster, an exceptionally talented architect and thinker whose writing has an unfortunate tendency to veer towards the style of a grant proposal, still has the most lucid final words:

The city has multiple young design firms with great ideas for the future of Chicago. Local architecture schools are think tanks for both practical and visionary explorations. Both the academic and professional design communities are ready to engage the public and help transform the city. Are you listening, Rahm?

Or, I might add, Tom, or James, or Gery or whomever else winds up running this deeply troubled city that endures as among the world's greatest.

And the time to pose the questions is not after the election, but during.  To try to make the candidates go on record about their intentions for Chicago's built environment, to be sure, but even more importantly, to force making a discussion about this crucial topic a core part of the campaign debate.

In a time when election campaigns have become saturated with vile attack ads created by slick, amoral specialists in slime who, in the case of the upcoming mayor's race, in all probability won't even live in Chicago and whose interest in the city will disappear the moment their last invoice is paid,  Chicago's future depends on displacing reckless smears with informed discussion.  Instead of articles that are little more than a snapshot poll, we need a series of panels:

Rahm, CAF, AIA, the Graham, APA, are you listening?

well written - from soft marshmallows to what we need more of in the future. thank you for outlining the enormous mistakes everyone failed to recognize.