Exiled to Indian Boundary: a Monument to Boodle in Old Chicago

Indian Boundary Park is all about things short in duration but long in memory.  In her excellent book, The City in a Garden: A History of Chicago's Parks, Park District historian Julia Bachrach writes:


Through the 1816 Treaty of St. Louis, the united tribes of Ottawa, Ojibwa, and Potawatomi ceded a 20-mile swatch of land to the United States government allowing white settlers and fur traders to safely pass through or settle in this area.  The resulting boundary line  cut through what is now Indian Boundary Park in Chicago's West Rogers Park neighborhood.

That treaty had a shelf life of exactly 17 years.  In 1833, it was unilaterally abrogated and Native Americans forced out.

Flash forward to nearly a century later, when an independent commission began assembling land for Indian Boundary Park.  Designed by Richard F. Gloede, Indian Boundary was a pastoral conception - no baseball diamonds.  Many neighborhood streets - Greenleaf, Lunt, Morse, Estes and Farwell - had already been named for the original 1870's combine that constructed early Rogers Park.  Now, in the boom of the 1920's, a new generation of developers enveloped the  the east and north borders of Indian Boundary with a collection of picturesque apartment complexes such as the Tudor Revival Park Gables and the Jens Jensen-designed Park Castle. 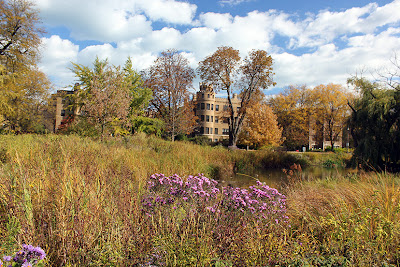 In 1929, architect Clarence Hatzfield again called on Tudor Revival for Indian Boundary's handsome fieldhouse, which soon became a vital cultural center for the community, including being a residency site for the CSO's training ensemble, the Civic Orchestra.  In May of this year, a disastrous fire gutted the fieldhouse.  It's now closed, indefinitely, for repairs. 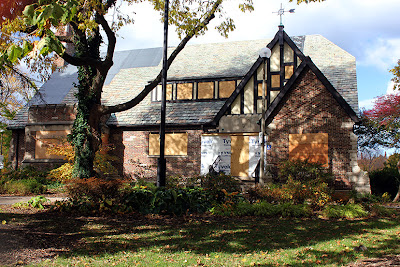 Indian Boundary's second short-in-duration, long-in-memory moment comes in an easily overlooked lump of stone not far from the fieldhouse.   Atop a couple of squat concrete blocks, you will find the heavily weathered keystone that sculptor A.C. Goddard carved for the Washington Street entrance of architect James J. Egan's City Hall and Courthouse building. 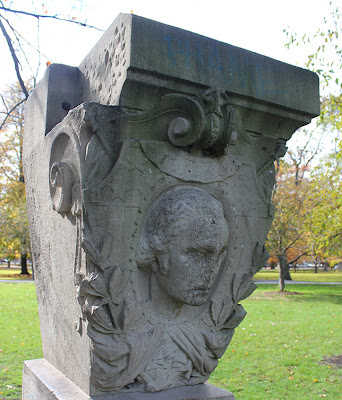 This rockpile was  Chicago's infamous fifth City Hall.  Begun in 1875, it took a full decade to complete.  Along with the adjoining County Building, it came in at an astronomical price tag of $4 to $5 million, no small part of it ascribable to graft.  The structure was a piker compared to New York City's Tweed Courthouse, which took twice as long to build and where the embezzlements of Boss Tweed are said to have been a larger part of the eventual $13 million cost.  In the long run, however, New York came out ahead.   The Tweed Courthouse still stands today as a beloved civic landmark.
The 1885 City County Building wasn't so lucky.  Its structural deficiencies and the lack of usuable space in its pompous bulk became apparent soon after the opening, and the prematurely crumbling edifice was demolished in 1908, after less than a quarter-century's service.    It's restrained replacement by Holabird and Roche, while woefully deficient in graft and corruption, proved far more durable.  It still stands - handsomely - today.

So Goddard's sculptural fragment, looking now a bit worn, dazed and disoriented, has already spent over three times as long looking down at Indian Boundary's lawn then it ever did in its intended deployment at its high perch,  gazing impassively at the teeming parade of human comedy passing below through the portal of that proud, forgotten building.  Ozymandias, anyone? 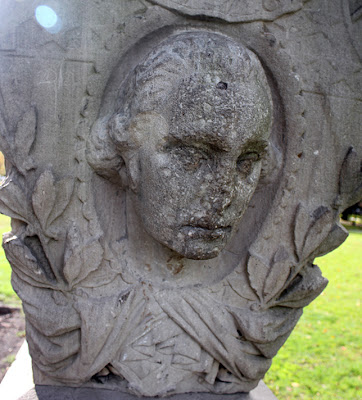 9 StrytautJust so you and your readers are not mis-informed-
the architect of the Park Castle Apartment Buildings is not "the" Jens Jensen-
but another Architect at that time with the same name as the legendary Landscape Designer-
Jens Jensen.
(a factoid gleaned from this years Open House Chicago 2012!)

Thanks for the apt "Jensen" clarification. I just want to thank you for spotlighting Indian Boundary in your mention of Ms. Bachrach's book. It was my playground as a boy in the 40's and 50's. Visited once about 2006 and was delighted to see it in good shape. I do hope the fieldhouse returns. As a side note: Who would have thought that the Casa Bonita, which I passed every day on the way to school, would one day be singled out for such notice?