Former Richard M. Daley condemned it as "Nowhere", the 20 acre park named after his father that he wanted to destroy so he could repopulate it with the stalagmite-styled skylights needed to try to erase the subterranean gloom in the Childrens Museum he wanted to jam beneath its surface.

That was over five years ago, and now, finally, Daley Bicentennial park is about to be erased.  But not for a museum.  The combination of a failing economy, anemic fundraising and persistent public opposition proved to much even for someone as powerful and persistant as Mayor Daley, and the Childrens Museum decided to stay put at Navy Pier.

No, as was always the case, the park is being torn up because the membrane that separates it from East Monroe parking garage below needs to be replaced.   A new North Grant Park, named after the late Maggie Daley, will be constructed atop the new membrane.  Designed by Michael Van Valkenburgh, it stands to be a handsome counterpoint to Millennium Park to the west, combining elements both passive . . . 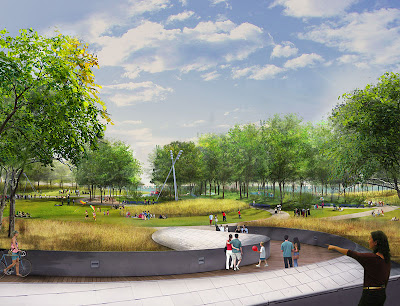 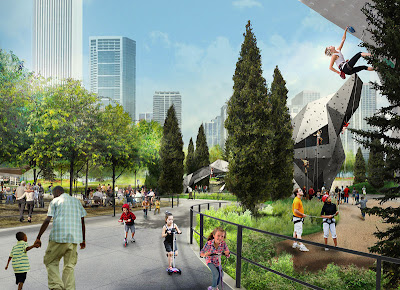 For now, according to Grant Park Advisory Council's Bob O'Neill, there are over 800 trees to be uprooted. with a mere 38 to remain at Peanut Park to the east, and at the miniature golf course to the south.  None of those 800 trees, which O'Neill claims to be all be aged, diseased or dying, will be replanted, although some of the wood will be reused on the new playground.  1,000 new trees are to be placed in the Valkenburgh landscape, of a mix still being determined.

Chain link fence is going up.  The majestic trees will soon be only a memory.  They served well. 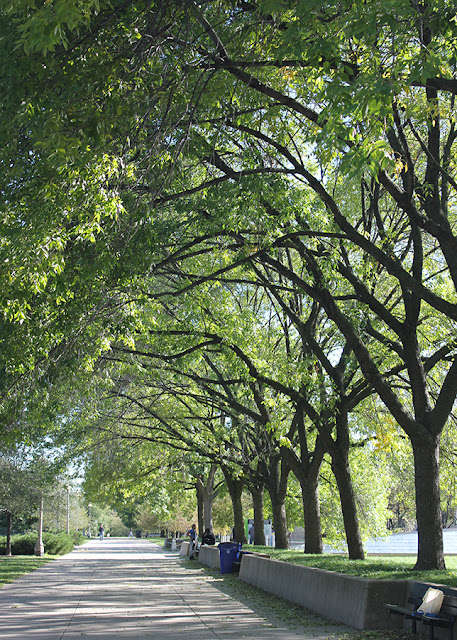 Read a photoessay on the uprooting of a different park:  A Forest Departs - Tree by Tree 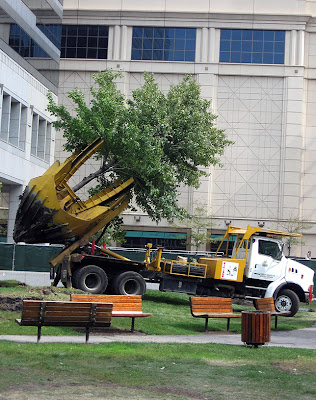