The World of Wiel Arets lands at IIT

Modesty is often not the first thing that comes to mind when thinking of architects, but the College of Architecture at IIT may be about to test it out.

It was a clear theme in the inaugural lecture by IIT's new Dean of the College of Architecture Wiel Arets last Wednesday, starting with the introduction by architect John Ronan. 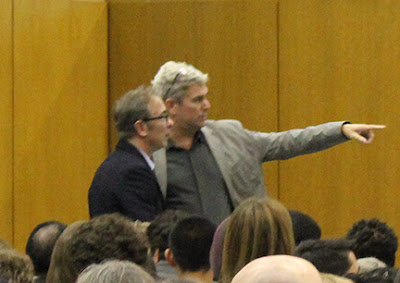 "When Wiel Arets came to Chicago to interview for the Dean position at IIT", said Ronan, "we took him out to dinner the night before his interview. The very first thing he said to us was, 'You have to understand, I’m not a teacher, I’m a student.' Four hours later, as we were the last party to leave the restaurant, and they were putting chairs on the tables, we knew we had begun an interesting dialogue that would have profound implications for IIT in Chicago."

"The school is you," Arets told the assembled students. "You are my colleagues." 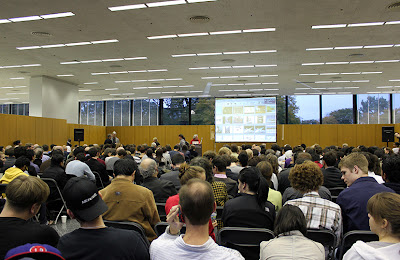 Arets, 57, who was named to his IIT post this past August, was previously Dean of Rotterdam's Berlage Institute from 1995 to 2002.  In his Wednesday talk, to an overflow crowd that spilled into Crown Hall's lower core, he gave an overview of the work of his firm Wiel Arets Architects that  stressed his optimistic view of the future, including the possibilities of the PAL-V flying car.

When someone was designing a flying car five years ago it was a young student of the University of Delft.  He saw that we were able to fly with a car we can develop and even James Bond is jealous. I think at this moment one of fifty of these cars are being produced in Holland and the only problem we have is that we are not allowed to fly with them, because the rules are not allowing us to do so. I think that’s something we have to be aware of as architects. We have to be aware as architects that rules sometimes allows not to do what we want to do. 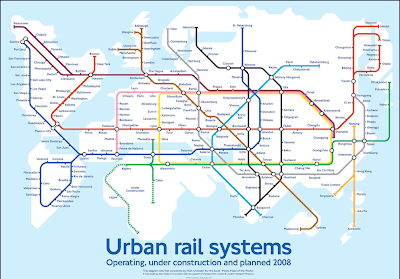 This subway map positioned on a map of the world is telling us that when we take the plane or subway that we think we go from place to place. We go maybe from Chicago to New York, or from Chicago to L.A., but are we going really there? The idea that we are moving from one place to another in a physical world where we have no clue what we are doing . . . I push a button and things happen. I think that’s something I’m interested in, the fact that the world will become, and is probably already one city.

The world is one city with neighborhoods as this map shows you. When this could happen and will happen, then the cities will be not only the center point; the cities will be connected to each other, like Being, Seoul and Tokyo in Asia.  The area the we are in now will be one of the bigger neighborhoods, as well. When this is happening , then the world will shrink for us, since we can move from one place to another in less than two hours.

On the other hand, I believe that diversity and the local conditions are maybe even more important than ever.

That's a rather tall order, especially since the wide range of the world that we are compressing to simultaneity is not just geographic, but social and economic.  More people are flying and traveling than ever before, yet that group represents but a small, highly privileged subset of humanity.   The central contradiction is reflected in Arets' own striking body of work, which ranges from everything from Living Madrid, a social housing project . . .
, , , to the Utrecht University Library . .
. . . to Hedge House, for a man with seven cars and a special room for his chickens . . .
What it will all mean for IIT I really don't know.   At times, it seems both too much and too little.  The mind reels, and I follow the advice of Arets as he closed Wednesday's talk . . .

"I think, John, we should have a drink."