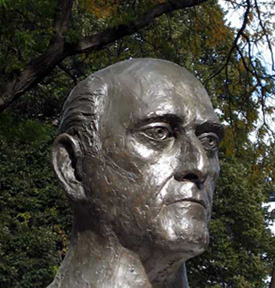 Today's 100th anniversary of the birth of George Solti, the long-time music director who brought the Chicago Symphony to worldwide prominence, brought back all kind of memories of how Solti and his music making contributed to my own life.

I came to classical music late, and, too Swedish for drugs or wild partying, it became the major addiction of my youth.  In music I found all the emotions  I shied away from in my well-behaved life.

(flawed audio, great performance)
I was so lucky.  My very first concert was at Ravinia, when a young unknown conductor, the second or third, last-minute choice after Istvan Kertesz failed to make it to the city in time, conducted an earth-shaking performance of the Mahler Resurrection symphony, aided during the apocalypse section by the heavens erupting in thunder and lighting and drenching the lawn audience.  That conductor was James Levine.

My second concert was heard all the way up in the last row of the gallery at Orchestra Hall.  Carter's Variations for Orchestra, and then, the Mahler 5th, with Solti conducting the CSO.  As you can hear from the recording, even with the rather tubby acoustics of Medinah Temple, it remains one of the most virtuosic performances of all time.  Adolph Herseth's solo trumpet call pierced the hall like Joshua at Jericho, and when the tsunami of sound swept over the audience with the entrance of funeral march, it may not have brought down the walls, but it shook all the cobwebs out of the mind and penetrated to the very soul. When I hear certain conductors decry "excesses" in the performances of Gustav Mahler (and, yes, I'm looking at you, MG), they're of course targeting Solti and Bernstein, but I wonder how they think Mahler's "symphony as a world" can be kept in their genteel teacup.
The Solti years were triumphant and tempestuous.  The CSO was the light under a bushel ever since a great tour that was to be led by Fritz Reiner had been cancelled years before.  Solti and the CSO conquered both Carnegie Hall and the great concert venues of Europe.  At a time when it was at the top of the news chain, Time Magazine put him on its cover as "The Fastest Baton in the West: Chicago's Georg Solti."

Solti's earlier rehearsal techniques earned him the nickname "The Screaming Skull", and on the podium his gestures were compared to those of a prizefighter.  Those violent jabs sometimes made it seem less like he was coaxing out the music than yanking it out by its entrails.  But the performances!

My third concert was Solti and the CSO playing Beethoven's 5th, and the next month, Schoenberg's monumental, thorny Moses and Aron with Richard Lewis and Hans Hotter. The month after that, it was my introduction to Giulini, with Brahms 4 and the Mahler 9th.

And it didn't take me long to be a lifelong Giulini acolyte - the combination of elegance, warmth and that "Promethean Fire" Claudia Cassidy referred to made, for me, the perfect combination, especially in a 1975 performance of the Bruckner 8th that shook me to the very core and remains the most profound concert experience I have ever had.

Giulini, alas, aged as he got older.  Although a Giulini performance was always an event, tempi grew slower and slower; the fire was banked.  Solti's energy never wavered, even at the end.  I remember the performances of Wagner's gargantuan Meisteringer when Solti was in his 80's.  When I came into Symphony Hall, I noticed a chair had been set up for him on the podium, and I thought that time must finally had taken its toll.  The chair, however, was largely unused.  Once in a great while, Solti would lean into for a few moments, and then be up and standing, conducting with his accustomed vigor.

Unlike the CSO's current Music Director Riccardo Muti, Solti was far less interested in the city than we was in its orchestra. Critics groused he didn't spend enough time in Chicago, but Solti knew the depth of his contribution, and to him, that was enough.  "They should erect a statue to me!"  he responded.  And so we did.

Solti's first performance as an opera conductor took place in Budapest on the same day the Nazis marched into Austria.   Knowing the danger, his parents, who he would never see again, sent him into a long exile, and it would only be after the war that his career could begin its meteoric ascent.

Yes, Solti could sometimes overwhelm a work with his hyper-tensity.  More often than not, however, he brought out the soul of the works in deepest expression.   When I listen to much of the music being made today, it can best be described as "workmanlike."  With Solti, perhaps because of his own life experience, making music seemed less a pleasant way to pass the time, than an existential life and death experience, at which everything was at stake.  That's the point of view I aspire to, and I miss George Solti's spirit even as much as we celebrate it today.

After Solti's unexpected 1997 death - all manner of celebrations had been scheduled in celebration, including concerts he was to conduct - the CSO's new Music Director Daniel Barenboim opened the season with the Nimrod section of Elgar's Enigma Varations in tribute. Here is Solti himself conducting the London Philharmonic.