The Ages of 830 South Michigan

In December of 1876, thirteen women got together to establish Chicago's first Young Women's Christian Association. By the time of 1893 World's Columbian Exposition, the YWCA had grown so quickly that they built an eight story structure at 833 South Michigan. Designed by John Mills van Osdel II, son of Chicago's first architect, it towered over neighboring homes, stores and offices.

The graceful red brick facade, with Italianate detail, was topped off with two floors of elegant bay windows, while an open air loggia at the second floor provided cooling breezes and handsome views of the Chicago lakefront. The new facility would be a safe haven for young women coming to the big city for study or work.
It was here that a young Ruth Crawford Seeger stayed when she came to Chicago in 1921 for her musical education, paying $9.50 a week room and board, plus another $1.25 for piano rental. In 1912 another resident, Margaret Anderson would remember the hotel as a place of "bad food, uncomfortable beds, and sap-green walls." In 1914, Anderson would go on to found The Little Review, which would publish the works of Eliot, Pound and Joyce. Ruth Crawford Seeger - Pete's step mom - would in her too brief life become a modernist American composer and musicologist.
In 1929, the building became the 830 South Michigan Hotel. In the 1970's, the hotel was purchased by Johnson Publishing Company and converted into offices. 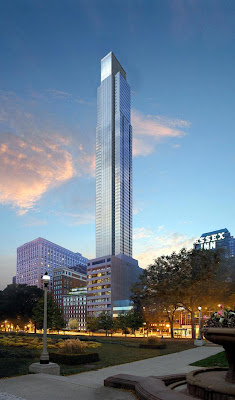 By 2005, 830 was among several parcels acquired by a developer for a $200 million, 376-unit condo tower. Designed by Pappageorge/Haymes, the Park Michigan, 80 stories and 855 feet high, would be built behind 830 South Michigan, which would serve as the entrance to the new tower. 830's facade and key architectural features would be restored.

Alas, the Park Michigan didn't even have to wait for the financial collapse of 2008 to die. In March of that year, the project's lender filed for foreclosure on the site, and in November, 830 South was sold to a venture associated with Matthew Pritzker for $17.6 million. After the crash, prospects evaporated. 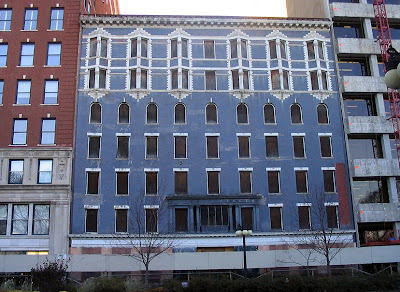 Left to rot for decades, the now blue-faced building was a boarded-up museum of decay: collapsed walls, water damage, rotting boards and piles of debris. It had become a threat not only to itself, but to its neighbors, with taggers breaking into 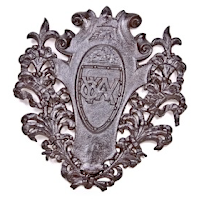 the structure to spray graffiti on adjacent buildings. In an article in the Columbia Chronicle, Lisa DiChiera of Landmarks Illinois reported that in addition to the ravages of neglect, 830 South also suffered from problems that went all the way back to the original construction, including a too-shallow foundation and a facade that was not properly connected to the structure.

With even preservationists sadly admitting defeat, the new owners filed for a demolition permit, which was granted after the city declared the building dangerous in November of 2009. Early in 2010, 830 was wrecked and the site cleared. Urban Remains went through the building and collected artifacts, including key fobs for the hotel, blocks of foliate terra cotta from the base of the facade's pilasters, and cast iron elevator grill cartouches. 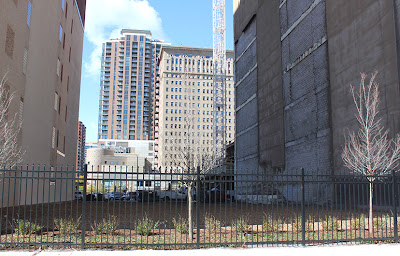 So now we come to what 830 is today: nothing. An empty lot. A raw abscess in the landmark Michigan Avenue street wall. It's testimony to how fragile Chicago's protection of its landmarks can be. The only positive legacy of 830's sad tale is the void it's left behind, an accusatory scar demanding we not waste this last opportunity along the civic showcase that is Michigan Avenue with anything less than the best.

That's the wrong vacant lot. Your picture shows the lot south of 900 S. Michigan, which at least functions as a parking lot. The lot for 830 doesn't even have bushes - just an ugly fence and dirt.

Oops! Thanks for catching. Image corrected.

I used to walk by that building all the time in the years before it got demolished. I always wanted to urban explore a building, and once I saw it getting demolished, realized that coulda been a great one. Now the only thing left is a pipe that sticks up 6" above the middle of the sidewalk. At least now they have added trees and bushes to the property line. I had such high hopes for Park Michigan and 1000 Michigan that would've faced Grant Park in the other vacant lot south, and yet neither got built. Quite unfortunate as they both looked better than half of what's built now a days.

Thank you for doing this research. My Grandfather lived here at the YWCA with his mother around the time it first opened in about 1896. It's great to see pictures and read about it a bit. I wish the building was still around, it sounds fabulous.

thank you for all the acts about that hotel. My aunt Lill used to be the manager for many many years in the late 1940s till it got sold I spent many summers there growing up I still remember the room my aunt Lil had loved this hotel.