I make no secret of it:  I think Open House Chicago is as absolutely great event.  If you don't know about it already, let the experts describe it:

"It's a free event for all Chicagoans." says President Lynn Osmond,  "Chicago Architecture Foundation's mission is to help inspire people to discover why design matters, and what better way than by opening up over 150 sites  for Chicagoans to go out and explore.  Last year we had over 85,000 people visit our sites, and it was really exciting to see how they discovered the sites of Chicago and our neighborhoods.  86% of those people were actually residents of the city of Chicago.  But we also had visitors that we welcomed from all around the world and from all 50 states."
"Last year, we had visitors from more than 54 countries," adds Bastiaan Bouma, Open House Chicago's Managing Director.   We're thrilled with the participation we received last year .  We're nearly twice the size this year.  We're in 25 neighborhoods, as opposed to 13 last year . We're in 13 community areas.  We're in 21 of the city's 50 wards . . . from Rogers Park to West Ridge to South Shore to Garfield Park , Little Village , Pilsen,  - it's a tremendous opportunity for people to rediscover the city of Chicago from a brand new perspective."

"Someone once said that Chicago is a city of 2.8 million architecture critics, and this is your weekend to take advantage of that instinct.  Free, behind the scenes, no tickets, no reservations.  Develop your own itinerary.  We do think that the bicycle is the ultimate Open House Chicago accessory.  The record last year was something over 50 visits by one individual , so we're looking forward to seeing somebody beat that record this year and I'll bet he or she is going to be on a bicycle."
Most of the sites are open 9 to 5 both Saturday and Sunday, but there are exceptions - Churches, as is to be expected, are open later on Sunday - so double-check the sites you want to see.

Also very neat, four composers from Access Contemporary Music have written musical compositions that will be composed at the sites they will be created for:  Jude Matthews for the Bridgeview Bank (12:00 to 3:00 p.m. Saturday), Katherine Young for the Nickerson Mansion (1:00 to 4:00 Saturday); Eric Malmquist for the Poetry Foundation (12:00 to 3:00 Saturday), and Timothy Corpus for the Arts Club (12:00 to 3:00, Sunday).  All events free. 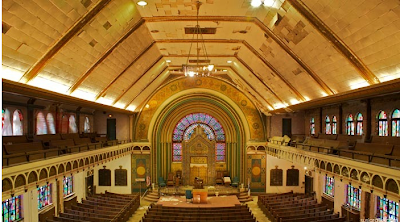 Among the new locations are places that almost never open to the public, such as the observation deck atop the Kemper Building, open for the first time in 40 years and offering a spectacular 360 degrees panorama of Chicago from 500+ feet up.  In the case of historic Agudas Achim North Shore Congregation, it's a space that's been closed even to its congregation since 2008. 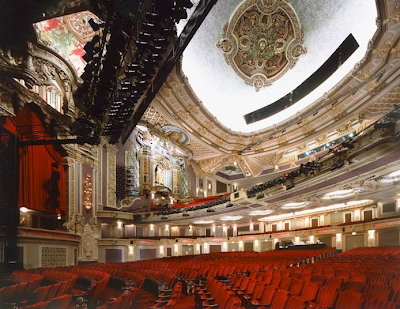 Theaters:  Check out Rapp and Rapp's hallucinogenic  Oriental Theater, the lovingly restored Apollo 2000 (the former Marshall Square Theater), Uptown's Riviera (Sunday only), and Adler and Sullivan's Auditorium.
I've included here photos of many of the most spectacular interiors, but don't forget the equally spectacular smaller spaces, from the offices of many of the Chicago's leading architects, to the former Sunset Cafe in Bronzeville, Andrew Rebori's Frank Fisher Apartments, the Downtown Islamic Center, the former Swift Mansion, Jayuya Barbership , Shedd Park Field House, Thalia Hall, the Green Mill, the Berghoff, and even the Trib Tower aerie (a/k/a the Colonel's office) that was the site for Randy Michaels' notorious poker games.

I could go on, but I think you get the idea.  Right now, the weekend looks warm and rainy.  What could be more perfect weather to check out the great interiors of Chicago.?  Take a few minutes to explore, and you'll discover wonders you may never have known existed.

What's the building with the pool in the videoo?