I'm still working on a post on 111 West Wacker, and I need a break from the tragedy of Prentice, so here's a photo I took yesterday.  If you walk up the stairways at the entryway to City Hall on LaSalle, you see these beautiful plaques depicting every building Chicago has used as a City Hall.

The 1872 Rookery was Chicago's temporary City Hall after the building on the public square in the block bounded by Randolph, Washington, Clark and LaSalle burned down in the Great Fire of 1871.  Hastily constructed around the large water tank on what was known as the "reservoir block", it was completed in a mere three months, opening on New Year's Day of 1872.  Although designed by architect John M. Van Osdel the "temporary" facility was sneeringly described as "a $75,000 pile of brick and mortar."  The drained reservoir was reconfigured to become Chicago's first Public Library, with 7,000 books assembled from supporters both local and international.
After the completion of a massive, ill-fated new City Hall in 1885, the structure was pulled down for the construction of the Burnham and Root masterpiece that, since it has never been owned by Northwestern, survives to this day.  The nickname of Old City hall - The Rookery - remained on the new building. 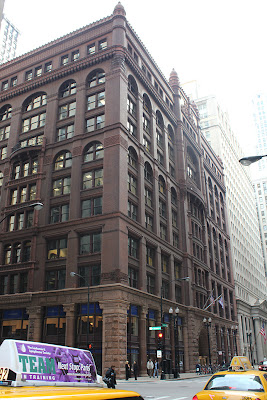 Why Rookery?  Some accounts refers to the birds said to roost in the structure, but a more probable explanation is that the municipal building became the roosting place to another kind of rook - the boodlers and crooked politicians who rooked and were rooked in turn.  Their presence was immortalized in stone at the Rookery's entrance.  If you look really closely, you may even seen the envelopes of cash tucked under their wings. 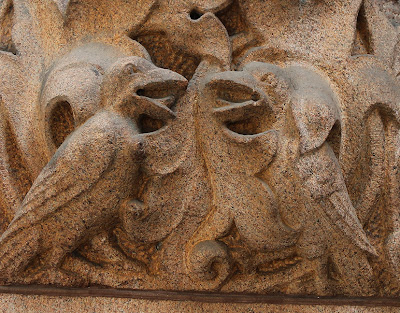