So for the story maybe some of you know, you have the John Hancock, which is a tall, black building, which is the groom, and we like to say that this white building is the bride

That was Nicolas Pesty talking.  He's the General Manager of the Sofitel Water Tower, which celebrated its 10th anniversary on November 14th by announcing the winners of a design competition among students of the School of the Art Institute for which the hotel's architect Jean-Paul Viguier returned to Chicago to judge.
I have a soft spot in my heart for the Sofitel Water Tower, not just because it's a great piece of architecture, but because we got our start at about the same time.  The sleek hotel opened in 2002.  Later that same year, it featured prominently in my first published work. 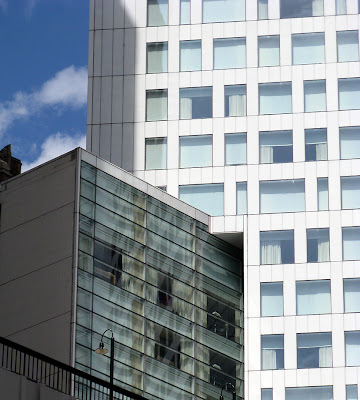 Are We Dead Yet? (it was renamed Stop the Blandness by the time it ran on the cover of The Chicago Reader in January of 2003) was a cry of outrage against the onslaught of mediocre, ugly towers popping up like noxious weeds in the Chicago skyline as part of the construction boom riding the wave of the great condo bubble.  To escape total despair, I wrote about three new projects that might point the way towards a better future:  Robert Bistry's RiverBend, Adrian Smith's Trump Tower, and the Sofitel . . .


It's like the love child of Le Corbusier and Miami Beach's Morris Lapidus, 30 stories of shiny mannerist geometry tapering to a knife edge on the southern end. The main facade, facing Connors Park, is a massive plane in which windows of irregular widths are assembled like a mosaic.  By day they look like blue gray tiles against the opaque white glass facing; by night they're lit and unlit pixels on a dark trapezoidal screen.

Seeing it at a distance, from any perspective, your first reaction is "Wow--what's that?" It's the party guest who stands an inch from your face, gleefully contradicting everything you have to say, and most of what the Chicago School had to say, about how to build a tall building. It's more than a little cocky, a little too in love with itself and its ideas, but behind the bravado is a seriousness of purpose that's in short supply most everywhere else

Yeah, I know, it's a little purple, but still pretty true.  Until Jeanne Gang's Aqua came along a few years later, the Sofitel had few challengers as the most distinctive Chicago skyscraper of the new century. 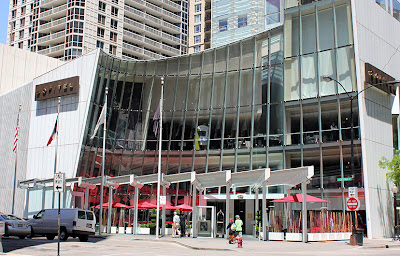 Designed by Jean Paul Viguier & Associés, the Sofitel had Teng and Associates as the local architect of record, with HKL Cladding Systems responsible for cladding a poured-concrete tower with its gleaming  facade of clear and white screen-printed glass panels. The 412 rooms are set in a 33-story, 347-foot high structure that Midwest Construction named one of the best of 2002, citing the challenges of the site, with large existing buildings to the north and west.  Seven by-seven-foot girders on the sixth floor were used to transfer loads over a base building holding the lobby and 4,500-square-foot ballroom.  Along the southern "prow" edge, no two glass panels are the same.   Tower and base were "delinked" with a four-foot-wide pour strip that was cast into a flood slab which drew any settlement cracks to it from the rest of the building. 
. . . had to meet three main needs: open the hotel’s public spaces onto the city, create volumes that would complement the horizontality of these public spaces and the verticality of the rooms, and, last but not least, create an emblematic building in this architecturally legendary city.

The tower therefore takes the form of a right triangular prism sitting on a base plate, with a “prow” sliced into by a virtual cone. The prism generates a generally triangular floor plan, avoiding the impression of never-ending corridors that often blights hotels of this type. The base plate containing the lobby, restaurants and conference rooms opens onto a small elliptical plaza formed by the “cut”, home to the restaurant’s terrace and the entrance canopy.

The prow leans out over the street, affording spectacular views from the rooms and, as a small architectural gesture, creating an iconic presence in the city.

This presence is reinforced by the facades, whose alternating strips of clear or white screen-printed glass bring a splash of light to the darker surroundings. The base plate and prism facades facing the elliptical plaza are glazed to their full height with clear glass highlighting the point where the virtual cone “cuts” into the prism. 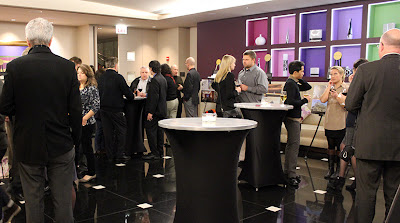 
. . . we have to do something that is really meaningful.  Meaningful for Sofitel, because Sofitel as a brand is very attached to architecture and design, but also meaningful to the city of Chicago.  We had to find a partner, and we had an excellent idea to partner with the Art Institute of Chicago and we had a great collaboration.  We organized that content and I think it was the best way to recognize the craftsmanship of the students to do this event tonight.


. . . The architecture of the future will be with the woman.  And that is very good news.  In our place, we are over 65% women, so this is why I'm so impressed tonight the jury chose three women.  It's beautiful architecture you did.  I would like to tell you that. For me, the interior design was just not to destroy the architecture of Jean-Paul Viguier.  That was my main concern.  And also to [bring] French interior designer to the capital of architecture in Chicago. 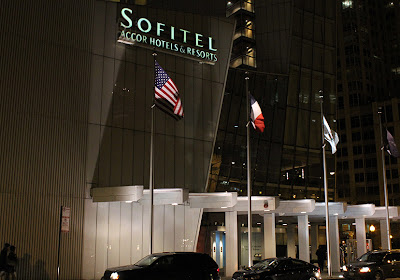 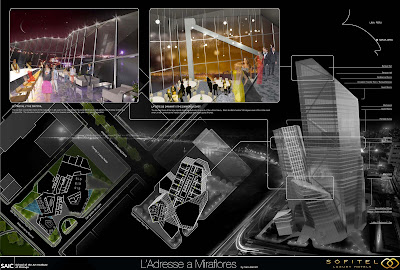 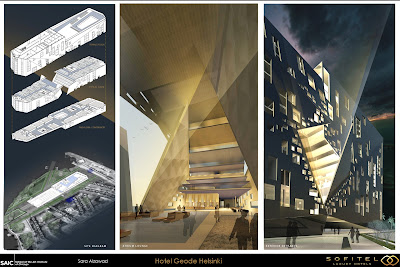 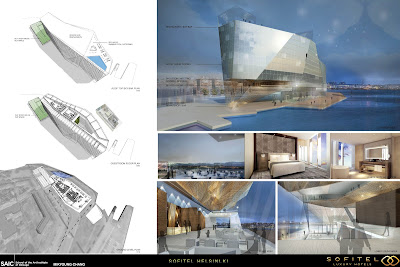 The first prize came with a $1,000 prize and a 5-night stay in any Sofitel property. 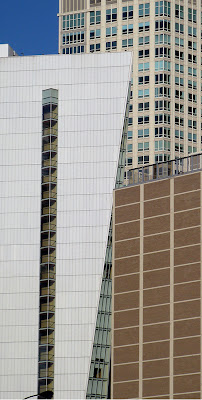 The Sofitel Water Tower was built for $73,000,000.  According to Wall Street Journal report, it sold in 2006 for $105 million to a trio of investors that promptly loaded it up with $160 million in mortgages.  When they had trouble re-financing the debt this summer, the property was acquired by the massive Blackstone Group, which owns 185,000 U.S. hotel rooms.  Throughout, and into the future, Accor SA manages the hotel as part of its global Sofitel brand.

Not long after its opening, the Sofitel was named "Best New Chicago Building in Last 10 years" by AIA/Chicago.  It continues to hold its own as one of the finest and most distinctive contributions to continuing glory of Chicago architecture. 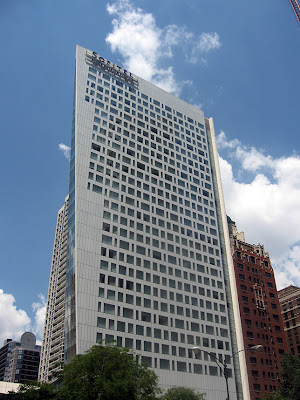