Holy Motors - a one-week window to see a One-of-a-Kind film, drunk on the power of architecture

Holy Motors is playing at the Music Box this week.

I saw two films yesterday.  The first, Steven Spielberg's Lincoln, is excellent.  Caveats are minor:  some of the exterior shots seem washed out and lacking in detail, and the U.S. Capital looks so blazingly white (didn't they burn coal in those days?) that it appears to be made out of spun sugar.  Daniel Day Lewis's performance is masterful, as is the script by Tony Kushner.  There was some disappointment that the film's opening was held back until after the election, but the current timing is even more appropriate as, in its essence, Lincoln is a film about Congressional gridlock.

Lincoln will be breaking into wide release next week, and I hope to be writing about it more in the future.  Another film, however, will probably only be here for a single week, and in every way it is extraordinary.  Not for everyone's tastes perhaps, but extraordinary. 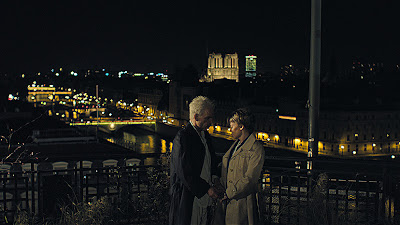 I'm referring to Holy Motors.  For those who know his work, just mentioning the name of its director, Leos Carax, is enough to draw you into the theater.  His last completed feature was 1999's Pola X,  Eight years previous to that, he made Les amants du Pont-Neuf, the Heaven's Gate of French film, with a runaway budget that made it the most expensive picture made in France to that time.  Like all of Carax's work, it's more than a little mad, and one of those rare knock-you-on-your-ass experiences.

You may well hate Holy Motors, but why risk the chance of missing something you may find, as I do I, absolutely unforgettable? 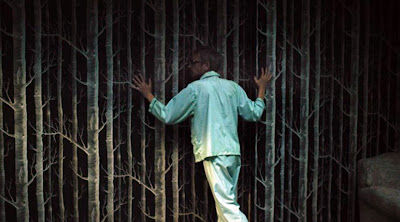 Holy Motors begins with a man - Carax himself - awakening in an apartment that looks like it's on the edge of an airport, one of those anonymous, alienating cityscapes that have become central to our time.  He punches through a curtained wall and finds himself in the empty balcony of a large theater.  As he moves forward, he sees that the main floor below has a full audience, watching a film.

We next find outselves at the side of a massive, stretch limousine, white, waiting for a tycoon (the great Denis Lavant) to depart his white International Style house for a day of work.  That long day will consist of nine - ten? - episodes, in which of which this man, Alex Oscar (Carax was born Alexandre Oscar Dupont) transforms himself into different people - a hunched aged beggar, an obscene pure-Id leprechaun, a shaven-head assassin, and, in one ecstatic sequence . . . an accordion player.

Carax, though only in his early fifties, is - and has been - a man out of synch with his times, who sees today's increasingly dominating virtual world as "a thing imposed by rich countries."  In a rare interview, with Filmmaker's Scott Macaulay, Carax continues . . .


In our world, I mean, the Western world, it seems everything is made to limit us. We think everything liberates us, you know? Every gadget is supposed to save us time. After a few years, you find out it’s the opposite. That’s been the case with my nephews and kids. They have not experienced life. They’re stuck at home with gadgets and stuff. Virtual reality is very interesting, and I do feel the possibilities are enormous, but I don’t want to get stuck in it. I would say that’s true with everything. I don’t like the world that I live in; I like the invisible world that inhabits me.

Carax found his inspiration for Holy Motors in those stretch limos, "a bubble, like a virtual world . . . good vehicles for fiction."  His exploration of the architecture of our cities is hypnotic, from that ocean liner of a house in the beginning, to the industrial bowels of basements and back alleys, to the ruined grandeur of La Samaritaine, the great Paris department store which figured prominently in Les Amants. Carax has an almost infallible ability to bring out through his story the poetic aura of the architectural spaces - from elegant to abject - he uses as backdrops. 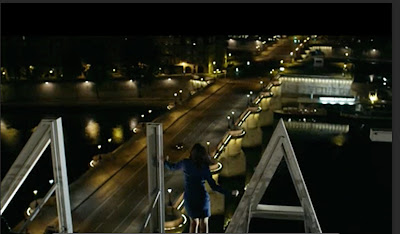 Holy Motors is, in turns, pretentious, incoherent, disgusting, sensationalist, raw - and all the better for it.  The sequence where Alex dons a motion capture suit and engages a like-costumed female partner is astonishingly beautiful. 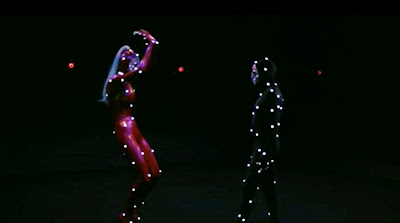 "We must disenthrall ourselves," Abe Lincoln said.  "Étonne-moi!" added Diaghilev, upping the ante. The curse of CGI is to make the fantastic as mundane as the every-day.  Says Leos Carax, "The problem is to find again that primitive power of cinema, that first shot of the train in La Ciotat. It’s harder and harder to do today. You have to reinvent that power, which is almost a mystical power, a magical power."

Holy Motors comes as close as we're liable to get today.  See it at the Music Box this week.