Mother of Mercy, is this really the Gateway to the Mag Mile? The dull void of Pioneer Court.

How much should we expect from our great public spaces, especially when those spaces are actually private? New owners are reviving and rebuilding the plaza between the two cream-white tours of the iconic Wrigley Building, as that passageway has become the gateway connecting Michigan Avenue to the beautiful Trump Tower riverwalk, and to booming River North to the west. 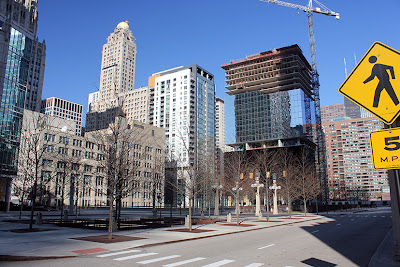 But when you cross Michigan Avenue, what do you find?  It's been two decades since Pioneer Court was last rehabbed.  The massive public square between the Chicago River and Tribune Tower has not aged well, nor, I would argue, has the 2.5 acre park just to the west at Cityfront Center, where a new 42-story-high apartment tower is now rising as architect David Hovey has finally headed into the city, with Optima Chicago Center.  Pioneer/Cityfront, raised high above the natural level of the city, remains ungraciously integrated to the lower, rapidly developing neighborhood to the east. Is it too early for reform?

A Short (?) History of Pioneer Court and Cityfront Center

The first thing to remember is that what we experience as the usual terra firma promenade of streets and sidewalks is often actually a massive succession of viaducts.  Where Pioneer Court stands today was the site the home and trading post of Jean Baptiste Point Du Sable in 1770's, which became the mansion of early settler John Kinzie in the early 1800's.  It was here that one of early Chicago's great economic engines, the McCormick Reaper company, built its factories, and it was here, after it all burnt down in the Great Fire of 1871, that the James S. Kirk and Company constructed the brick-walled factory - five stories high, 520 feet long - where its 600 workers turned out 50,000 tons of soap each year.  Although the plant was described as "a model of cleanliness", the rest of the riverfront was a seemingly random, but densely interlocking matrix of docks, roads, rails, grain elevators and industrial structures that cared little about putting on an attractive face. 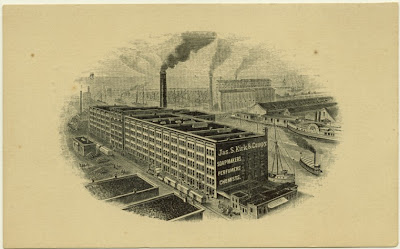 A long way from its current status as a recreational gem, the Chicago River then was an essential but ugly thing, and the gentile city turned its back on it.  And so when it finally came time to build the great bridge envisioned by the Burnham Plan, it was raised up 35 feet above natural grade to allow all those commercial functions to continue unimpeded below.  As is often the case, however, the functions which were carefully accommodated by a visionary new project were already in decline. Less than a decade after the Michigan Avenue Bridge's 1920 completion, the Kirk soap company was sold to Procter and Gamble and the factory demolished.

The decline in river-bank industry was hastened by the bridge's construction, which began to transform North Michigan Avenue into what would eventually come to be known as the "Magnificent Mile," with the gleaming new Wrigley Building and Tribune Tower its two sentinels.  The Kirk factory site, just south of Tribune Tower, remained an open pit and a surface parking lot.
Finally in the 1960's the Tribune Company and Equitable Life Insurance redeveloped the property.  To insure a continued clear view of their gothic tower, the Tribune made sure the new Equitable Building was set far back from Michigan Avenue,  creating Pioneer Court as an open breathing space, 100,000  square feet of red brick paving, rising up - long before Koolhaas and Balmond's floor that becomes a wall - to form large planters that broke up the monotony.  At the northern end, a large circular fountain had the names of 25 of Chicago's pioneers - from Burnham to Pullman, duSable to Kinzie, Ward to Wacker, but no Al Capone or Cap Streeter - set in bronze inserts along the low retaining wall.
And so it stood for a quarter century, when a new mega-development was envisioned for the 60 acres between Pioneer Court and the lakefront.  The area east of Columbus was slated residential.  The western edge of Ogden Slip was filled in, the 1,600-foot-long Pugh Terminal Warehouse, truncated at the eastern end for a new tower, was redeveloped as North Pier.

As recounted in City Front Center, The Design and Approval Process, a 1988 dissertation by Wyllys Thomas Baird and Anne Elizabeth Winkler, an early plan envisioned decking over the entire site at the level of Pioneer Court, but a 1984 master plan created  by Alexander Cooper of Cooper, Robertson and Partners opted instead for decking over only the portion west of Columbus.

That plan took the 1970's development Illinois Center as the poster child for how not to do a mega-project.  With its endless dull corridors, repetitive buildings and seclusion from Michigan Avenue, Illinois Center was the place everyone loved to hate.  Unlike the recently fashionable "superblock" concept of development that Cooper rejected, Cityfront Center, to be built west of Columbus behind Tribune Tower and the Equitable building, would be made up of regular-sized blocks connected to the existing streetgrid.  Cooper was careful to maintain vistas, such as the view from Ogden Slip to Tribune Tower in the distance.  Instead of small "vest pocket" parks such as you can find next to the Harris Bank or Brunswick (George Dunne) buildings downtown, Cooper opted for a new $23 million central greenspace, designed by Ted Wolff when he was still at Skidmore, Owings and Merrill as a "grand civic space. Trees and landscaping . . . in the center of a one-way loop roadway system."  The $55 to $75 million cost of the new infrastructure was completely borne by the developers.

An initial proposal to provide vehicular access to Cityfront Center along a new street to be constructed just south of Tribune Tower was blocked by community groups, but Pioneer Court was still torn out and reconstructed along the lines we see today.  Pioneer Fountain was demolished.  The 37-story-high NBC Tower was completed in 1989, and the University of Chicago's Gleacher Center followed in 1994.  The Fairbanks began in 2000, stalled after the parking garage floors were constructed, and then was finally completed in 2008.  Hovey's Optima Center is scheduled to open next year.  As you can see in my crudely annotated map, several undeveloped parcels remain.
So this is where we are now

Long gone are the planters and the fountains, the concrete seating circles, the handsome streamlined pavilion that housed escalators descending into the Equitable's lower level arcade.  All swept away in the 1990's rehab.  Gone also Marilyn, Forever - not to mention John Kearney's metallic but anatomically correct Moose.  We are left with this enormous, flat, featureless plain that, aside from the occasional art fair, remains an uninviting, windswept nullity. 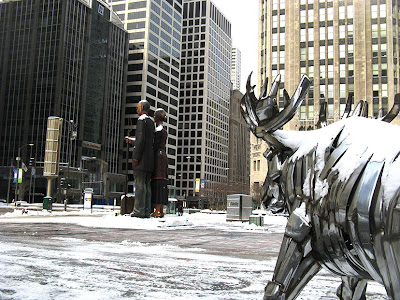 And while the larger part of Pioneer Plaza in front of the Equitable seems well maintained, in the section south of Tribune Tower, as the plaza's original paving cracks and decays, it is not restored, but replaced with mismatched slabs of poured concrete. 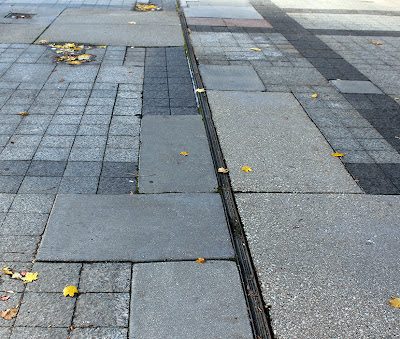 The form of a graceful promenade centered within landscaping is, at Pioneer Court, inverted.  The landscaping is in the center, anchored by a high trellis-like metal frame structure at its core.  You walk by it rather than through it.  Have you ever tried to walk through it?  You can't - it's closed off at the eastern end.  You're shunted off to the left or right as if pushed off into a ditch. 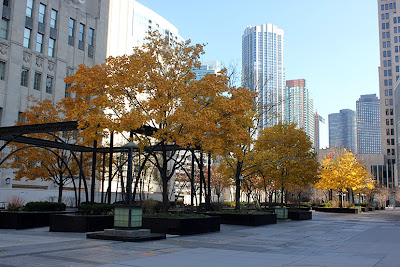 The larger, main portion of Pioneer Court has the tour buses pulling up at it's periphery and tour boats being hawked at river's edge, but it's a thin crust with absolutely nothing inside.   Cityfront Plaza is a place of great density, but it's as quiet as death.  It's like Rockefeller Center, with all the life sucked out. The view from Cityfront Plaza down Pioneer Court to the great, floodlit towers of the Wrigley Building and Annex is one of the Chicago's great vistas, but in the current design it barely registers. 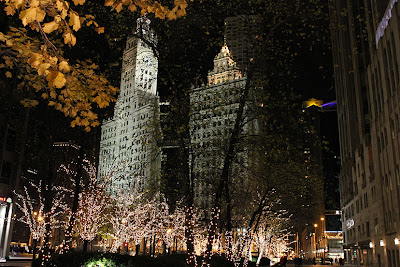 When you get to the end, where the level of the city drops down, you get an escalator that seems out of service even in warmer months, and the gesture of a grand double staircase negated by being executed in the style of a fire escape . . . 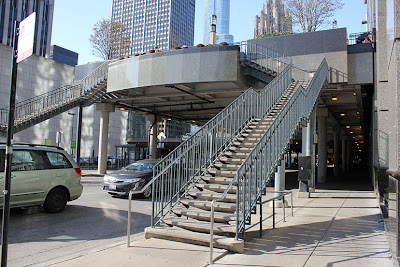 The top landing is designed so clumsily that the space between the parapet and the end of the handrails barely provides enough room to turn left or right to the next flight of steps . . . 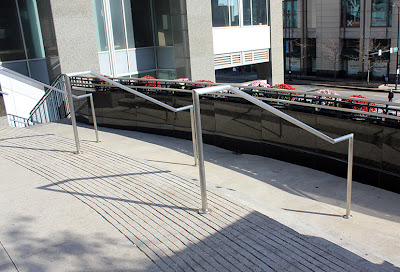 As a backdrop to the Equitable Building and NBC and Tribune Towers, the Pioneer Court/Cityfront Plaza combo works beautifully.  As a public amenity and gateway, it fails miserably.  It's like the the modernist city Jacques Tati satirized in Playtime, a lot of skyscrapers hermetically sealed from the plazas that link them. Don't touch.  Keep moving.

Equitable has an NBC sidewalk studio that, unlike the similar facilities for ABC on State Street and CBS at Dearborn and Washington, actually turns its back on the plaza and the public.  Although new dining from Bottleneck Management was announced for the WGN Radio storefront studio space this past January, there are still no restaurants or cafes, and the only shop is the University of Chicago bookstore in the Gleacher Center.  Even though Pioneer Court was rebuilt to co-ordinate with Cityfront Plaza, there is no sense of continuity between them in either style or plan. 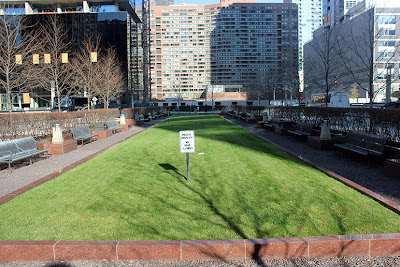 I've always loved the long strip of lawn at Cityfront Plaza, but, truth to tell, there's also way too much gravel that goes with it . . . 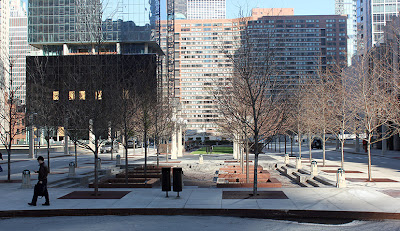 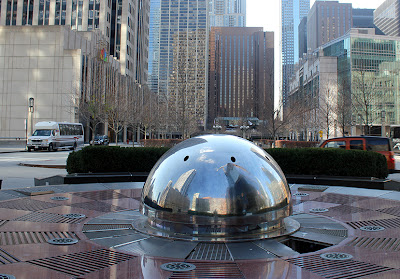 . . . and the quartet of "monumental" light fixtures have always reminded me of a concrete version of those cactus lamps that were fashionable - briefly - in the 1960's. 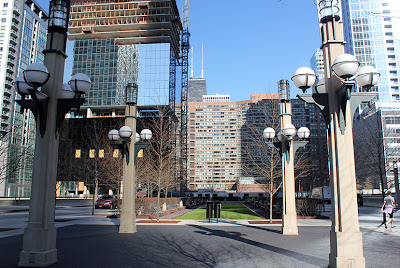 I make the trek from the Wrigley Building to the Columbus Drive stair often, and it seems longer than it is because there's nothing to stick to - it's more like a pedestrian chute than a true promenade.  I'm always struck by how I seem to encounter just as many people using the ugly underside of the viaduct as I do on the pathways above. 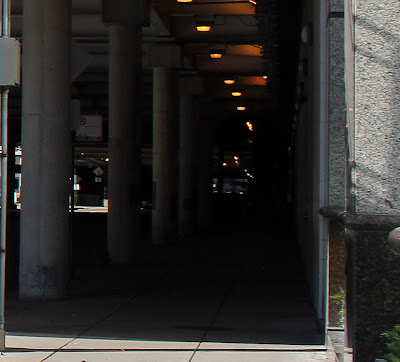 Soon, the 1992 design of Pioneer Court and Cityfront Plaza will be at the same quarter-century mark at which the original Pioneer Court was rethought and rebuilt.  It's time to start thinking about how this grand twin gateway - to the Mag Mile to lower, residential level of Streeterville - can become more human-scaled, inviting and alive.