At a sold-out event at the Chicago Architecture Foundation last night, the announcement of the winners in the Chicago Architectural Club's 2012 Chicago Prize Future Prentice competition marked the opening of an exhibition, handsomely mounted by CAF's Kate Keleman, of the issues surrounding the battle to save Bertrand Goldberg's Prentice Hospital, Reconsidering an Icon: Creative Conversations About Prentice Women's Hospital.  Competition winners are on display, and you can also view all of the entries, both at CAF, and on-line, here.
From the time I've been able to spend with the submissions so far, I can say that the entries are of an extraordinarily high quality, balancing both the deeply researched and the extremely creative, often in the same concept.

In addition to ten invited participants, the competition received 71 entries from 13 countries.  In addition to the CAC and CAF, the exhibition was co-sponsored by Chicago Bauhaus and Beyond. and AIA Chicago, whose Executive Vice President (and competition juror) Zurich Esposito announced the winners, which included an Honorary Mention, First, Second and Third prizes.

Juror Martin Felsen talked about what motivated the eight-member jury in selecting the competition's winners . . .


We met after Mayor Emanuel gave the big thumbs down for the survival of Prentice.  So that really affected our thinking, our mood, and how we judged the winners.

Innovation really had to be at the core of the ideas.  Practical solutions, while greatly appreciated - and awarded prizes in certain cases - were in a sense secondary to the idea that there's a kind of disciplinary innovation that had to be pushed ahead, and that was a direct result of the decision that was rendered by the Mayor.   We went away from saving Prentice, in a sense, to around it - ideas in general. The jury also discussed how these proposals could add real value to the health care sector in terms of innovation.

A big conversation - maybe the biggest conversation - was around the idea of a master plan and how a master plan maybe could have solved this whole problem in the first place.  Several of the proposals we see up here tried to repurpose Prentice as the heart of the Northwestern campus, highly connected between all of the different buildings and spaces in the neighborhood.  And on a more practical level, we just thought that a master plan that thought about the building itself, not as something to tear down or replace, but as something at the center of the campus, could have given a whole new meaning and function to the building as a place that the community could be centered on. 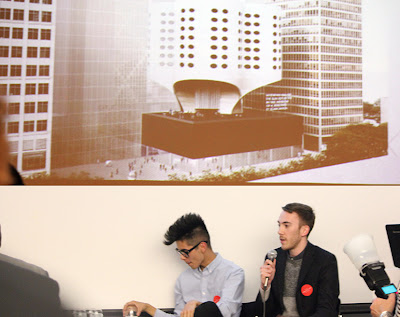 The First Prize winner, whose name draws on the work of word artist Robert Montgomery, was The Buildings are Sleeping, You Should Go and Wake Them Up, She Says, by designers Cyril Marsollier and Wallo Villacota.  Their proposal saves the foremost half of Goldberg's concrete cloverleaf, and builds Northwestern's new Research Lab behind it, in a way that the surviving half of old Prentice becomes whole when reflected in the glass curtain wall of the new structure behind.

Marsollier talked about the entry . . .


I think we really approached this project from a very pragmatic way.  I think we felt tied to the situation of losing Prentice.  That idea was frustrating in some ways, and so we really wanted to approach this project in a way that was a very real solution in our heads of how we can deal with this problem, as well as preserving the iconic imagery of the building.  Even walking by it how, it's extremely powerful, so I think that was  key to the whole project. 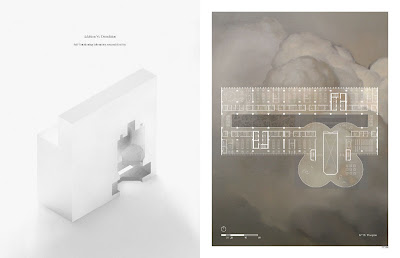 . . . We wanted to make sure that Northwestern could find its own reasons to keep the building for itself. . .

Good luck with that.  In an article in Architectural Record,  spokesman Al Cubbage told reporter Fred A. Bernstein that Northwestern refuses to even look at the proposals.  With Mayor Rahm Emanuel safely stuffed in their back pocket, and all but one of the members of the Landmarks Commission little more than puppets to Emanuel's machinations, the courts are the only remaining check on Northwestern's arrogance and power.  Yesterday, Circuit Court Judge Neil Cohen issued a temporary stay of the Landmark Commission's revocation of the preliminary landmark designation it had unanimously granted Prentice less than two hours before.  The next hearing is scheduled for December 7th. 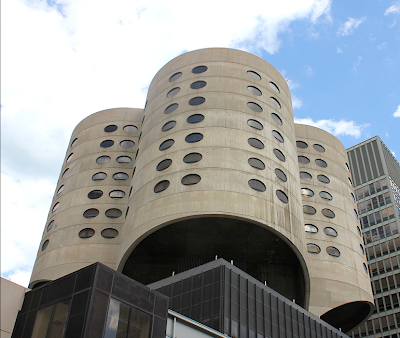 You can see all the winning entries on the CAC's website here.  Reconsidering an Icon: Creative Conversations About Prentice Women's Hospital is currently running in the Lecture Hall of the Chicago Architecture Foundation, 224 South Michigan.  Bertrand Goldberg's Prentice Hospital - the actual building - is running at its original site, 325 West Huron, at least through December 7.  Extensions are uncertain; see it while you can.

curious no comments and over 600,000 views chicago hasnt changed