Waterview has Risen from the Grave! (as 111 West Wacker)

It's not every day you have a groundbreaking ceremony on the 28th floor, but that's exactly what happened last Thursday morning at 111 West Wacker, the 28 story-high concrete hulk along the Chicago river that has remained empty and unfinished since contractors and their workmen walked off the job four years ago.

111 West Wacker doesn't ring a bell?  How about Waterview ? 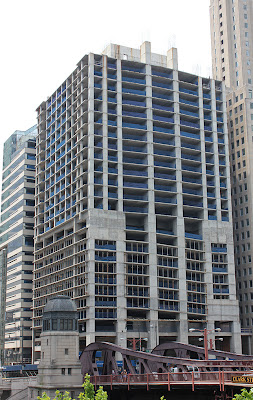 Waterview is a cautionary tale about never gambling with your own money.  Chicago architecture and engineering firm Teng and Associates launched the project in 2006.  The river-fronting West Wacker Drive streetwall had exploded with new developments during the real estate boom of the 1980's - skyscrapers like 77 and 225 West Wacker, and Leo Burnett.  Now, at the peak of a another boom, Teng announced their attention of filling fill in the last available parcel-  a 24,000-square-foot surface parking lot for as long as anyone could remember - with a 1,050 foot-high tower that would be the 5th tallest building in America, a half billion dollar project with 233 luxury condos above an ultra-luxury Shangri-La hotel with 200 "hotel condos", where the owners would rent their units back to the hotel when they weren't using them. 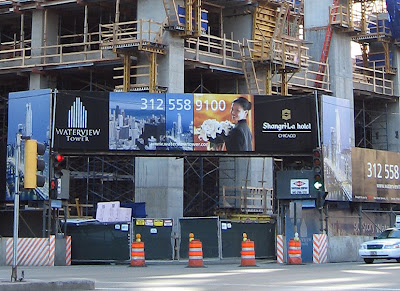 Starting Waterview with their own money was only Teng's first mistake.  The next was beginning construction began without having financing in place.  In 2007, Teng took out a $20 million bridge loan with LaSalle Bank to get things started, and then watched it became a bridge to nowhere as the real estate market collapsed and banks stopped lending. 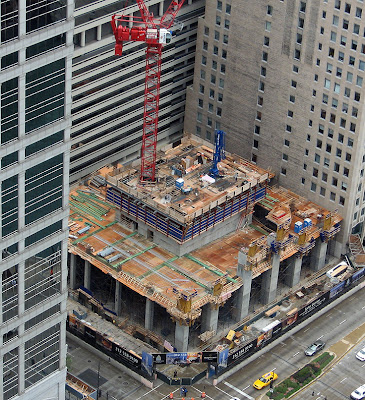 Teng just kept plugging along, excavating 4,500 truckloads of Chicago clay to create four below-grade levels for parking and ballrooms.  The structure - a core and outrigger design - continued to rise, up to the 28th floor.  Teng kept the construction going by simply not cutting checks.  In September of 2008 contractors finally caught on and walked off the job.  The estimate of unpaid bills topped $100 million.

Teng suffered the consequences of not just one, but two bubbles.  The first was Chicago's condo construction bubble, which resulted in thousands of unsold units by the end of the decade.  The second was the short-lived "condo hotel" bubble.  According to a post mortem in Crain's Chicago Business, at its peak there were over a dozen local properties hitching their star to the idea of selling hotel rooms to condo owners.  Exactly one project - the Hotel Raffaelo - actually sold out and was considered a success.  Of the others, two - a Mandarin Hotel east of Michigan Avenue, and a 60-story Canyon Ranch on the site of the plaza behind St. James Cathedral on Wabash - never even broke ground.  Three more resulted in bankruptcies.  Units in Trump Tower proved a tough sell, and eventually the Elysian (now Waldorf) hotel dropped its own hotel condo project.  In March of 2009, Shangri-La pulled out of the Waterview project.

The previous April, an entity called the Export-Import Bank of China appeared to be ready to step in to provide $400 million for the project, in a deal that would have also require buying materials from Chinese suppliers. By the following November they pulled out, citing the deteriorating economy, leaving only a $4.8 million lien from Shenyand Yuanda Aluminum in their wake.  That same month, the project's sales staff was put out to pasture.

In June of 2009, Bank of America, which had assumed the bridge loan when they acquired LaSalle Bank,  filed to foreclose on the property.  Liens had been filed by dozens of unpaid contractors.  Scott Fradin, a lawyer representing Shenyard Yuana, told Crain's  "Nobody's going to get anything out of it because it's worthless."  CB Richard Ellis was hired to sell off the carcass. 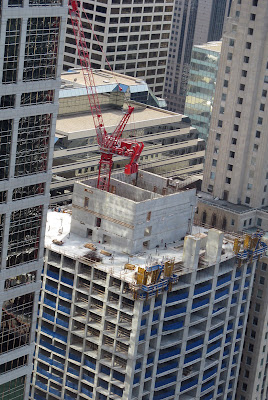 After promises of a clean-up never came to fruition, the City of Chicago filed an emergency motion in July of 2009 to have the site secured, the idled construction crane at the top of the truncated tower dismantled, and the project officially certified as "abandoned".  The following January, after the usual legal haggling, a second crane was erected to deconstruct and remove the first crane, at an estimated cost of $800,000.  In 2010, Teng and Associates was absorbed into Canada's Trow Global Holdings, now exp.federal.

There were several attempts at resurrection.  Late in 2010, developer Mark Goodman proposed a $300 million project to finish Waterview off as a 60-story office tower.   In 2011 Michael Reschke, developer of the J.W. Marriott on LaSalle, reached a tentative agreement to build offices atop a hotel, but in July of 2011 Related Midwest signed a letter of intent to acquire the site, paying a consortium that included Teng and several dozen other stakeholders $26 million to gain control of the Incredible Hulk of Wacker Drive. 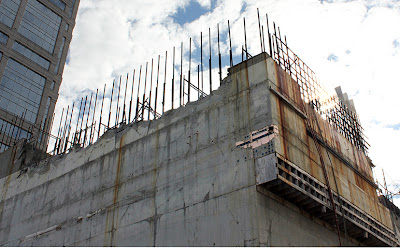 Related Midwest claims a quarter-century history in Chicago, and has worked with Lucien Lagrange on such projects as the Park Hyatt Tower and 840 North Lake Shore.  It partnered with Magellan on Martin Wolf's/Solomon Cordwell Buenz's 340 on the Park at Lakeshore East.  In the last couple years, however, as laid out at Thursday's event by Related Midwest President Curt Bailey, it's turning into a juggernaut . . .


Related has taken about a billion dollar step in the last two years in Chicago.  That's represented by this project, by 500 Lake Shore Drive, which I invite you all to come look at. . . As well, we are taking over three condo buildings in the South Loop, which represent together over 500 condos, which we will be marketing and selling over the next couple years.  That represents over 50% of the built yet unsold condo product in the market.   We remain the leader in affordable development in Chicago, specifically Parkway Gardens, a 670 unit project at 64th and Martin Luther Drive which we are re-imaging and is under rehabilitation right now, as well as Roosevelt Square, a 100 acre [CHA]"plan for transformation " project on the West Side, and we've recently been awarded the Lathrop Gardens, probably the most high-profile CHA project in the City of Chicago. 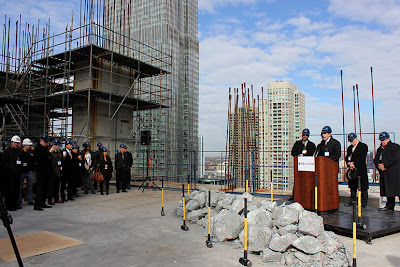 And so, at a media event last Thursday morning, it all became official.  90-story Waterview is now become 59-story 111 West Wacker, with a design by Handel Architects of New York, working with A. Epstein and Kara Mann of Chicago.  The hotel and the condos are gone, replaced by 504 high-end luxury apartments served by 470 parking spaces.  Although constriction was originally announced to have restarted earlier this year, it was only in September that Related secured a $115 million construction loan from Bank of America and U.S. Bank.  As with 500 Lake Shore, Related is partnering at 111 West with the AFL-CIO Building Investment Trust. 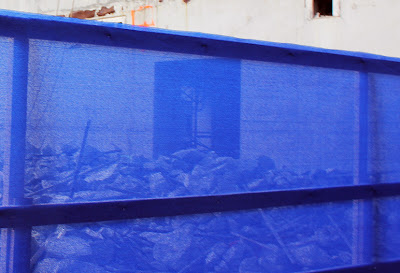 Demolition has begun at the top of the tower, and construction is slated to be completed in 2014. 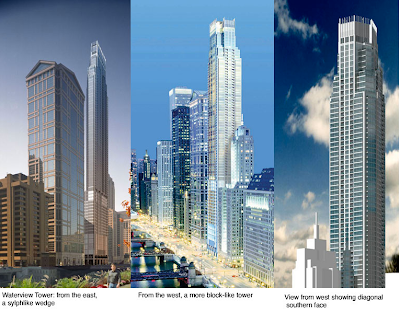 The new design has taken some heat for being clunky, but you can see from the renderings above, Waterview was usually promoted through an easterly perspective that showed the slenderest profile.  You can't stuff a lot of apartments into an edge that thin.  The profiles to the west and south revealed a more capacious - and chunkier - floorplate. 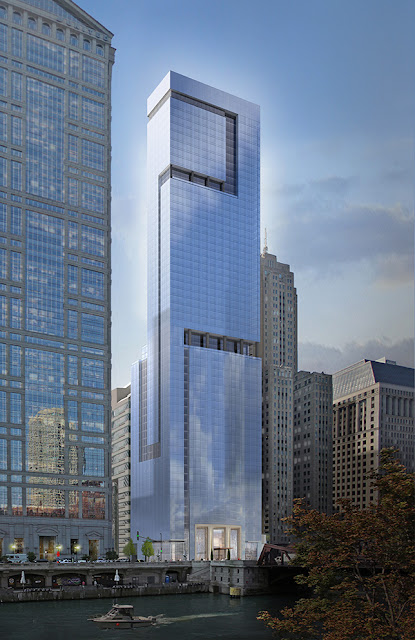 The Handel website describes the rationale behind their new design, shown in the rendering above . . .


Created as a series of interlocking blocks, the tower responds to both the river and its neighbors in the form of a cut that runs from the base to the penthouses, wrapping the building in a recessed glass ribbon.

Ascending the building, the ribbon creates opportunities for green space and balconies. Wrapping the 25th floor, the ribbon ties into the setback of its western neighbor before wrapping again into a green roof atop the building podium and continuing skyward.

The setback is also illustrated in the elevations below . . . 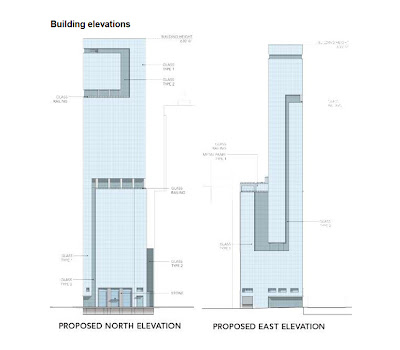 Especially above the setback, the vistas from the apartments should be striking.  Even on the 28th floor, the views are spectacular. 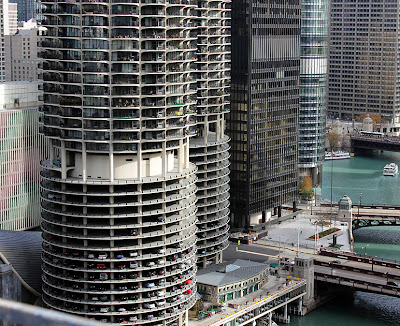 The construction of condo buildings is now pretty much at a standstill.  Once again, apartments are king.  With an expanding slew of new buildings, could the next bubble already be brewing?

Call me sentimental, but I've grown rather fond of the exposed concrete honeycomb  that is Waterview interruptus.  I'll always keep it in memory as a monument to the hubris and frailty of our compulsion for ever larger, ever taller towers. But I won't miss it.  I look forward to seeing how 111 West Wacker locks into place as the last piece in the puzzlework of the Wacker Drive streetwall, that neo-romantic museum of  architecture and urbanism that rises like a craggy mesa from the broad moat of river and esplanade. 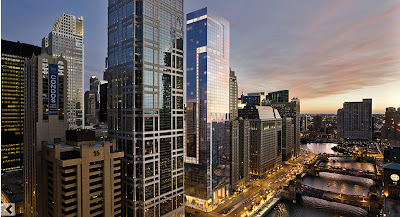