1,600 Years of Sleeping with Strangers: The University Dormitory, from Ancient India to Future University of Chicago - Part One: Nalanda

Last Tuesday, the University of Chicago unveiled its North Campus Residence Hall and Dining Commons.  The $148 million project, designed by architect Jeanne Gang of Studio/Gang and scheduled to completed in 2016, addresses the world just beyond the university's campus in a very different way.

We'll get to that design in the third and last part of this series.  To begin, however, we're going to take a look at India's Nalanda, often cited as the world's first university with dormitories.  Thanks go out to my good friend Jyoti Srivastava, who has given me permission to use the photographs you see here, taken earlier this month.  You can see her entire Nalanda photoset here.
Dormī - to sleep, tōrium - a place. From the Latin dormitorium, the word dormitory dates only from the 15th century, centuries after the first great European universities were founded.   More than half a millennium before Oxford, or Cambridge, or the Sorbonne, however; there were the dormitories at Nalanda, in Bihar in Northern India.

नालंदा. In Sanskrit, nalam means lotus, symbol of knowledge.  Da means giver. Beginning in the 5th century A.D., a succession of Gupta emperors began the development at Nalanda, 88 kilometres southeast of Patna, of a series of monasteries that would become a great seat of learning. Much of what became Tibetan Buddhism originated from the teachers and traditions of Nalanda.  The scope of the curriculum was universal- not only Buddhist and Hindu studies, but science, astronomy, medicine medicine, and foreign philosophies.   Subjects were both studied and thrown open to discussion and investigation. Universal/university.
Those seeking to study at Nalanda were stopped by the keeper of the gate and quizzed on their knowledge of both the old and new books.   Like Harvard and other elite universities today, only a small number of applicants - as few as 2 out of 10 - gained admittance to Nalanda.  Also as at today's elite schools, Nalanda attracted scholars from far-away lands - Tibet, China, Greece and Persia.  To be able to say you studied at Nalanda opened doors throughout the world.  Nalanda was both an evangelizing force for Buddhism throughout Asia, and a powerful mechanism for intellectual exchange.  The mathematician Ayrabhatta, sometimes credited with originating the concept of zero, is speculated to have been an early leader of Nalanda University.

From its early beginnings - none of the original buildings appear to have survived - Nalanda evolved as a planned community.  The Chinese monk Xuanzang, who spent 17 years in India, wrote a portrait of Nalanda in the 7th century as a complex surrounded by a brick wall, and having eight separate halls, each with a large courtyard surrounded by a continuous veranda fronting small, 10 x 10 cells for the monks, often with a small adjacent niche for storing documents.  Monks slept on stone platform beds.
Some of courtyards functioned as lecture halls, with a speaker's platform on the lower level, large enough to let the lecturer spread out manuscripts around him. And occasionally some sandwiches.

The individual four-story college structures were set within landscaped gardens and mango groves.  Red-flowered shrubs contrasted with the blue lotus flowers floating on pools that ran throughout the complex.  Mynahs, peacocks and other birds could be found on the grounds.
Nalanda was a technology center for terra cotta, which was used extensively throughout the complex, along with carved granite columns.  Wood was used to construct the upper stories of the college
structures.  Floors and pavements were laid upon a layer of lime concrete.  The omnipresent well-baked red brick, made with mud and local produce such as rice, barley, or cow dung, has proved to be especially durable.  Broken bricks were mixed with lime to create the stucco used for the ornamental images.  In later years, bronze spires and accents were added to the towers.

By the time Muslim invaders from Turkey overran India in the 12th century, Buddhism was already in the throes of a long decline.  In 1193, an army under Bakhtiyar Khiji, seeking to expunge India of Buddhist influence, sacked and burned Narandal, including the great library, which is thought to have held hundreds of thousands of texts, each wrapped in cloth and carefully placed on metal stacks.  It was said that at the center of the immense library complex the nine-story tower known as the Ratnadadhi - Ocean of Gems, for its richly bejeweled and gilded surfaces that glowed in the glint of the sun - burned for weeks, the smoke from the destroyed manuscripts hovering over nearby hills like a lingering ghost.
After some abortive revivals, Nalanda largely disappeared from memory, even its very name, to be replaced by the name Bargaon.  It wasn't until 1860 that archaeologist Alexander Cunningham again identified Bargaon as the site of historic Nalanda.   Meaningful excavation didn't begin until 1915, but by 1982, remains of six major temples and eleven monasteries were revealed.  Work is ongoing.

In 2006, a consortium of nations including India, Singapore, China and Japan announced plans to create a new 450-acre Nalanda International University at Rajgir, 10 kilometres from the historic site.  The new Nalanda was officially established in 2010, with Nobel-Prize-winning economist Amartya Sen as it's first chancellor.  Its seven schools will include religious, historical, scientific and business studies. 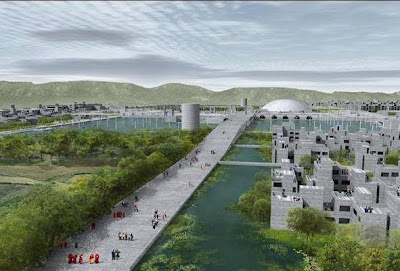 In May of this year, Vastu Shilpa Consultants - the firm founded by 85-year old architect Balkrishna Doshi, who worked with Le Corbusier in Chandigarh and Ahmedabad  -won out over seven other finalists, and 79 initial entries, in an architectural competition for the design of the new campus, which is to be modeled after the principles of ancient Nalanda. 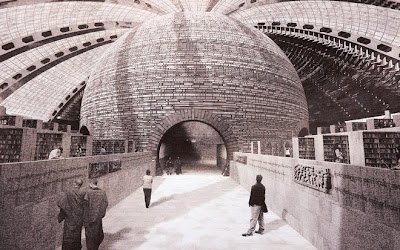 The design is intended to be zero-energy and zero-pollution.  Automobiles are to be banned. Mechanical air conditioning is to be replaced with a natural Devap system to cool and dehumidify outside air.  In old Nalanda, brick walls, in many places six-feet-thick (the same as at the base of John Wellborn Root's 1891 Monadnock Building in Chicago) kept heat out of the rooms.  In new Nalanda, double-skin facades will provide similar insulation.  The new library will be housed not in a tower, but under a great dome.  A pond will be dug and the mud from the excavation used for making bricks as part of a program of local sourcing.  Lily pads will, as in ancient Nalanda, float on the pond. Solar cells will be erected above it to provide electricity.  The new campus, scheduled to come on-line in 2014, will initially accommodate  2,500 student and 500 teachers, and eventually expand to 7,000 inhabitants.

Next:   A Century of Dormitories on the University of Chicago campus

Definitely enjoy if you haven't already!

Fantastic historical document - thanks for the link!

Interesting of you to connect Nalanda and the U of C Dorm since our firm, dbHMS, are engineering both.

I'm not related to Dr. John Boyer as far as I know btw