“People Spots” are part of the Chicago Department of Transportation's “Make Way for People” program, designed to “creative public spaces that cultivate community and culture in Chicago's neighborhoods through placemaking.”  The first installation, last year along the 2,900 block of North Lincoln, was a fairly conservative affair, a deck spreading from the curb along several parking spots offering a cafe-like seating area of green chairs and tables, demarcated from the street by a series of planters.

The new People Spot is a bit more radical, a sculpted, continuous bench taking over several parking spots along the 3500 of North Southport.  According to a report by Serena Dal of DNAinfo Chicago,  both People Spots are the work by dSpace Studio, with a total project cost for Southport around $75,000.  It appears to be especially popular with kids, more adventurous than older coffee sippers. 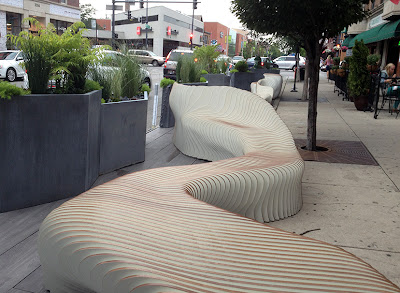