This is where it old began, not that many years ago, at the plaza separating the Graham Anderson Probst and White's 1922 Wrigley Building, with its clock towers modeled after the 12th century Giralda tower in Seville,  and the 1924 annex just to the north.  It was a tired sight, filled with crumbling concrete planters and an anemic fountain.  A section of the elegant cream-colored terra cotta had been removed years ago to create a blocky ‘modernist‘ entrance for what was then the Wrigley Building Restaurant. 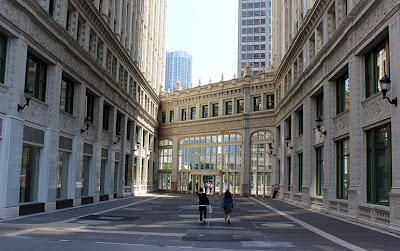 Then in August of 2010, Mars candy, which two years before had bought  Wrigley, the company and the building, removed the fountain, planters and benches, leaving the the shadow of where they stood on the unaltered pavement.   Replacing the modernist entrance was an incredibly cheap-looking sequence of metal and glass storefronts, installed to monetize the plaza with retail that never game. 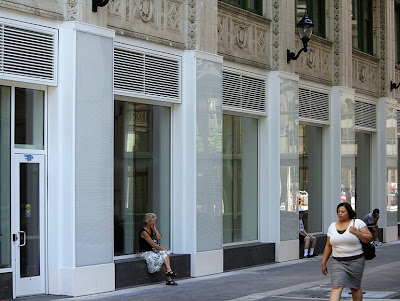 The following year, Mars announced that it would be moving out the last of the Wrigley employees from the building - jumping up the vacancy rate from 40 to 65% -and sold the 460,000-square-foot structure for somewhere around $30 million to a local investment group, BDT Capital Partners, LLC..

The new owners accepted the largely empty status of their investment to launch a “comprehensive renovation . . . transforming The Wrigley Building into a model business environment for the modern age.”  According to a report in Crain's Chicago Business, the $70 million project, aided by tax breaks coming with the building's new status as an official Chicago Landmark. 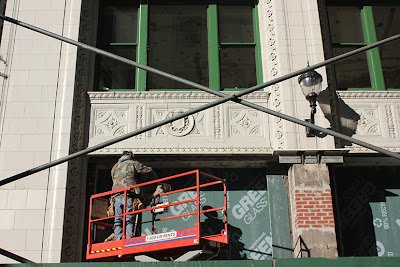 With Goettsch Partners as the architects, the project has included restoring original 1920's bronze chandeliers, found in a storeroom of discarded fragments, to the building's south lobby.  Other original design elements have been uncovered or restored as the infrastructure has been updated to contemporary standards. 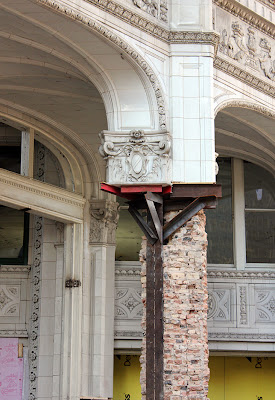 In July of last year, the plaza was sealed off for its own rehab.   It's actually a viaduct, owned by the City of Chicago and built over what was once North Water Street.  The metal storefront from Mars were ripped out, as was a wooden window wall, built long after the building opened,  in the terra-cotta faced screen that marks the entrance to the plaza and supports an above-grade bridge linking the two buildings. 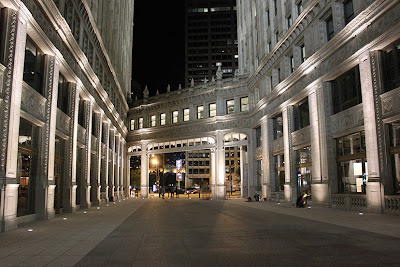 Nearly a year to the day after the plaza closed, the $2 million rehab is complete, and it's been done right.  There's new granite paving, and new terra cotta where the 7-11-style metal storefronts and wood screen used to be. 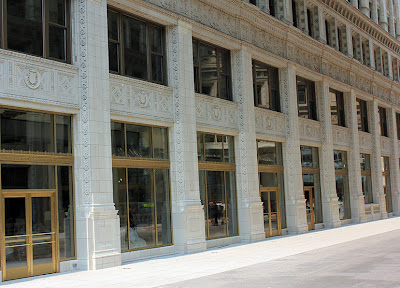 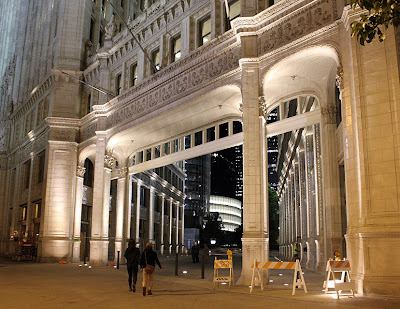 The screen along Michigan once again has its original, Chicago-School-style openness, with spectacular views to the Trump Riverwalk, its glowing spiral garage and 353 North Clark to the west, and Pioneer Plaza and the Equitable Building to the east.
Right now it's also a little empty.  Goettch's renderings show the plaza alive with people at tables lining the plaza's north and south facades (the designated dining perimeters are actually demarcated by a change in paving stone), with the intention of the space becoming an “open-air shopping arcade” with up to eight shops or restaurants. 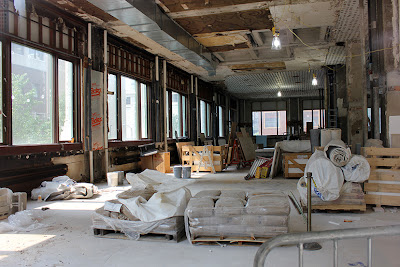 At the moment, however, all those spacious retail areas are empty, and the only announced tenant so far is Walgreen's, which is taking pretty much the entire north tower retail component, with a 30,000 square-feet flagship spread out over two levels.  Although the drug chain now sells sushi at its similarly massive store across from Macy's, it's hard to see how it will support the kind of white-tablecloth dining seen in Goettsch's rendering.

It doesn't help that none of the 90,000 square-feet of retail at the Riverwalk, just west of the Wrigley Plaza, of the Trump International Hotel and Tower, has never been occupied since it opened almost four years ago.  Donald Trump, after ripping out Hoerr Schaudt's spectacular native landscaping, for a generic, cheaper to maintain replacement,  announced in 2012 he was essentially holding his breath against renting out the retail space until he gets high-end retailers that are unlikely ever to be in the market for below-grade space at a location with no other retail anywhere near it. 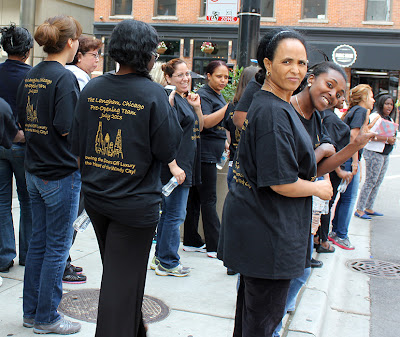 Maybe the added traffic from the new, nearby Langham Hotel at Mie's IBM Building, opening in about a week, will help in generating the kind of traffic that will give the Wrigley and Trump plaza the restaurants and retail that will raise them up to being true piazza-quality civic spaces.  For now, even in its initial state as empty as the Trump, the rehabbed Wrigley Building plaza is a major achievement. 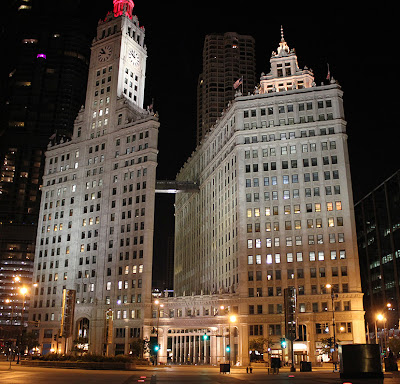 It's open! I work in the Tribune Tower and in the past year I've walked through the construction to get to McDonalds for lunch. Funny how I find out it's done via your blog instead of walking outside.

I'm also excited that Walgreen is moving into the Wrigley Building and that it's gonna be on two floors! While I have a dear dear sentimental feeling for Walgreens in its current location (my coworkers and I often run across the street to hang out in there for little breaks), I'm super happy to see Walgreens in a historical landmark.