Is a new real estate bubble rising around the Chicago River?  Long dormant land in and around Wolf Point is already under construction with two major skyscrapers, and this morning, in an email to his constituents, 42nd Ward Alderman Brendan Reilly unveiled the first renderings I've seen of the proposed office tower for 150 North Riverside, to be built on air rights over tracks leading into Union Station . . . 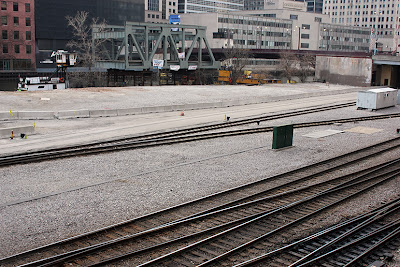 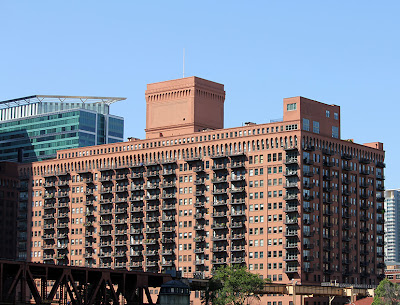 I actually worked for 6 years on its top floor before it was converted by Hartshorne Plunkard into the Randolph Place Lofts.  Unlike its twin building to the south, which was made into - and remains - offices - it's now housing, and the residential nature of Randolph Place may be a key reason while 150 North Riverside is placed in the middle of the site.  The Trib's Blair Kamin is tweeting Goettsch Partners is responsible for the design.

The 1.2 million square foot building is being pushed by long-time John Buck veteran John O'Donnell, now of the Chicago operations of Colliers International.  An April article by Ryan Ori in Crain's Chicago Business reported O'Donnell had given up a request for $20 million in TIF funding to get approval for the project moving forward.  River Point, currently under construction along the river across the street, got $29.5 million in TIF money to cover over the Metra tracks and create a riverfront park.  Instead, O'Donnell wants the city to give him a slice of land worth $4-5 million the city controls to make his site complete.  The rest of it was purchased for $12.5 million in 2011.

According to Crain's, Reilly had been fighting an earlier proposal because the park component wasn't at ground level.  In the rendering released in his email, the park remains entirely at the elevated street level, with no riverbank component
Across Randolph Street to the south, at the Boeing World Headquarters (originally designed by Perkins+Will in 1990 for Morton Salt), the riverside esplanade is split into two, relatively narrow parts, one above-grade, at the level of Randolph and Lake streets, with another narrow strip descending all the way down to the river. In the 150 Riverside rendering, the plaza space is all at street level, with a larger portion south of Lake tucked beneath the angled cantilevers of the building.
Across the street to the north, on the other side of Lake Street, renderings of the park building built along the river as part of the River Point shows, as at Boeing, a park split between ground and street level.  The ground level links to a riverside esplanade at the River Bend residential tower to the north. The difference is the River Point site is actually set back to the west, parallel to where the Butler Brothers building is sited to the south.  The park itself is to be a built over what looks to be pretty much the whole expanse of the Metra tracks, making the acre-and-a-half park much larger than what's possible at 150 North Riverside.  (Don't be fooled by the rendering, which is drawn from an exaggerated wide-angle perspective that makes the park look only slightly smaller than Yellowstone.)
I get what Ald. Reilly is looking for, a continuous riverwalk from River Point to the elevated plaza of the old Daily News Building.  It would require the addition of under-the-bridge linking components, but it would offer up something similar to continuous Riverwalk now under development for the south bank of the river from Lake to Wabash.   The problem, of course, is that it could only go to the old Daily News Building (now Riverside Plaza), at Madison, where the riverwalk south to Jackson is all elevated at street level.  (And let's hope 150 North doesn't give Sam Zell ideas about resurrecting his old plan to build over the Daily News Plaza.  Surprise, surprise, the Commission on Chicago Landmarks has never gotten around to landmarking this essential Chicago building.)
So for continuity, you want a large part of the park at 150 North Riverside to be at an elevated level so it will link it to the existing river walkways north and south.  If you want to split off a walkway along the river, it would have to be somewhat narrow, and, as at Boeing, it's hard to find a graceful way to get people to the lower level without a vertiginous shotgun stairway.  In addition, the 150 North Riverside rendering also shows the space along the river beneath the plaza to be inhabited with some function not clearly apparent.

As for the building itself, if it weren't for the angled cantilever at the bottom, it really doesn't have much to distinguish itself visually at all and, at first glance, I'm not even sure the cantilever works.  There seems to be a lot of tall, tall concrete at the base.  Dear readers, what's your take?

In any event, more should learned from the public hearing.  Welcome to the arena, Mr. O'Donnell. 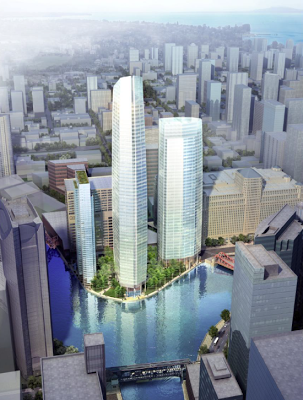 The Daily News Building Plaza: Endgame for one of Chicago's Great Public Spaces?

The building is pretty hideous, and won't add much to the aesthetics of the area. I don't have a problem with the park area being all at street level, since it has to be elevated above the train tracks anyway. I'm not sure why the Morton/Boeing building was built with the river-level walkway, especially with the rest of Riverside Plaza to the south being at street level.

The site is 2 acres and O'Donnell seems to have planned park over the entire site, except the small portion where the tower touches down.

Core-supported construction is completely conventional, and the structural elements appear to be stone-clad, i.e.- not exposed concrete.

Don't care much for the architecture but then again those concrete residential bunkers of the 1990's and 2000's got built regardless with similar careless attitude. Design is an evolution and doubt that this rendering will hold much substance after community meetings and the Architect's own conscious on good design.

Having the park at the upper level for that portion of the river makes sense to me but maybe it could bridge access to the north of the new development at the lower level to match East of Lake Street.