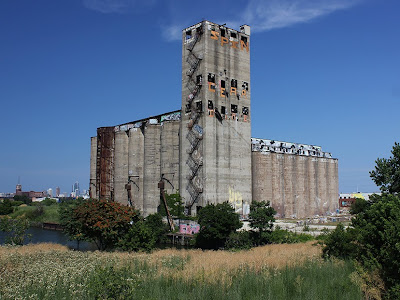 Sometimes something can be so spectacularly useless that it endures.  And in enduring, it begs to be re-invented. 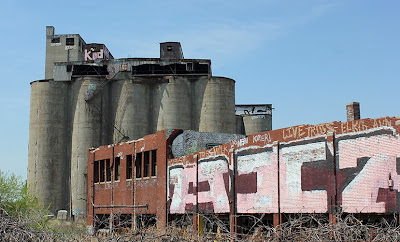 Such is the case with the Santa Fe Railroad Grain Elevator.  It stands on its own peninsula, jutting out into the South Branch of the Chicago River, along Damen, just north of 29th street, a tight set of 35 grain silos, 80 feet high, plus an even taller elevator
Joseph Dart was said to have invented the modern grain elevator in Buffalo, New York in 1842, as the city, mediating between the Great Lakes and the Erie Canal, was becoming the grain shipping capital of the United States, using steam power to transfer the grain from boats to tall silos at speed of a thousand bushels an hour.  As bigger, more ambitious elevators were constructed throughout the city, their unornamented, frankly industrial form drew admiring attention from a generation of European architects including Adolf Loos and Le Corbusier.

With the growth of the railroads, boom-town Chicago, Nature's Metropolis, became the king of grain elevators.  The building type became the Great Pyramids of a new supply chain of industrialized agriculture, made possible by the McCormick Reaper and the standardized system of grading wheat introduced by the Chicago Board of Trade in 1857, allowing crops of a similar quality from a multitude of different farmers to be combined by grade for shipping, storage and trading.  In a single decade, the grain processed in Chicago increased by a factor of 25, to over 50 million bushels a year.  By 1871, Chicago's grain elevators had a combined capacity of nearly 12 million bushels.  Before the towers of Sullivan or Burnham, they were the city's first skyscrapers, and the site of the great elevators at the mouth of the Chicago River engulfed in flames must have been one of the more apocalyptic visions of the Great Fire.
Afterwards, 10-story-high elevators arose along the river right across from Wolf Point.  By 1893, the capacity of Chicago elevators had risen to over 32 million bushels.

While grain in itself isn't especially combustible, grain dust and oxygen form a volatile mix, and elevator explosions were the result.  The complex along Damen owes its existence to just such an explosion.  Its predecessor elevator, along the river a bit to the east at 27th and Wood, was a  five-story, 400 feet wide and 175 feet long frame structure covered in corrugated sheet iron.  Its 60 bins could hold a million and a half bushels.  In September of 1905, a spontaneous combustion at the top of one of the wheat bins had the elevator engulfed in flames before the first fire truck even arrived.  The elevator was destroyed at a loss of $300,000 for the building and another $500,000 for the 845,000 bushels of overly-toasted grain - staggering sums for that time.

A new elevator, designed by  John S. Metcalf,  was built the next year to the west, at the Damen Avenue location.  In addition to the 35 storage silos with a capacity of one million bushels, there was the tall elevator, a long-vanished 165-foot-high smokestack, and a powerhouse whose boilers drew filtered water from the river to generate the 1,500 horsepower of steam and electricity that powered the elevator's operations.  There was room for 60 rail cars on site, and another 300 a short distance away.
In 1928, the State of Illinois had acquired the elevator and its 20 acre tract in exchange for 29 acres of the abandoned Illinois and Michigan canal, and was leasing it to the Stratton Grain Company when in December of 1932 another explosion, killing 3 workers, destroyed the massive workhouse and 200,000 bushels of grain.  The following June, drawing on $200,000 in insurance proceeds, work began on a replacement elevator, of completely fireproof, reinforced concrete construction, that would double capacity to 800,000 bushels.

It opened the next year, even as another disastrous fire destroyed the Rosenbaum elevator on Goose Island, and 1.6 million bushels of with it.  It was one a succession of fires that cut the city's capacity by 8.5 million bushels.  Spurred by lower wage costs elsewhere, Chicago's status as the country's largest grain storage center was over.  The city's capacity of 50 million bushels was little more than half Minneapolis's 90 million.  It was also exceeded by Kansas City's 60 million, and matched by Duluth, Superior and Buffalo.  Too bad Chicago, the city of architectural innovation, never got around to putting up one of Frei Otto's tensile silos from 1959 . . . 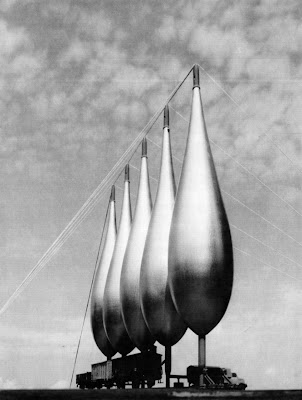 Today, in Buffalo and elsewhere, huge, abandoned grain elevators litter the country.  Some have been converted to other use.
A 36-silo elevator in Ohio was bought by the University of Akron in 1975 and converted to Akron Quaker Square, complete with a Crowne Plaza Hotel.  The hotel closed earlier this year, and it's being converted to student housing.  Architect Riccardo Bofill converted the 30 silos of a turn-of-the-century cement factory in Sant Just Desvern , Spain into the headquarters of his firm Taller de Arquitectura. (thanks to MAS Context for the tip.) In Marseille in France, C and T architects converted an abandoned grain silo into an opera house.  Perhaps the most ambitious conversion has been in Baltimore, where twelve of the original silos of a massive 1923 Baltimore and Ohio grain elevator were incorporated into Silo Point, a luxury residential complex with 228 condominiums.

The Santa Fe Grain Elevator has been inactive since  a massive explosion and fire in 1977, the same year there was a disastrous explosion at the Garvey Grain Elevator at 93rd and the Calumet River, a half-million-dollar fire that claimed the lives of two workers.

As related in a article by New City's David Witter, the State of Illinois recently held an auction to try to offload the property, but no buyer came forward with the minimum $17 million price. A spokesperson for the Rick Levin auction house told Witter the ask is now down to $11 million. 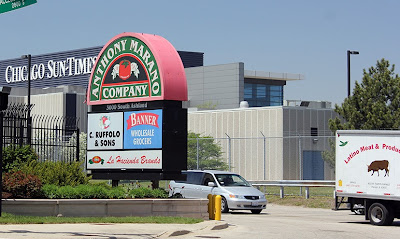 Still, the Santa Fe Grain Elevator remains a commanding presence in the skyline of Canalport, an area in the throes of the usual post-industrial stress.  Across the slip to east, a $100 million, 330,000 square-foot, state-of-the-art printing print built by the Chicago Sun-Times in 1999 was closed in 2011, and remains empty.  (According to a report by Ryan Ori of Crain's, a deal to convert it into a $1 billion data center fell through late in July.)Wrapping around it is the Canalport Riverwalk Park, a largely undiscovered gem completed in the 1990's on the peninsula just east of the one on which the Santa Fe Grain Elevator stands. 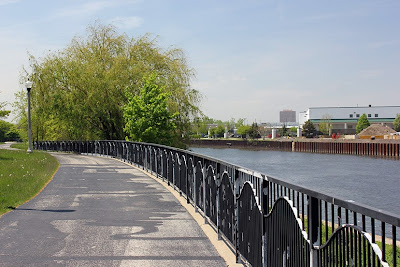 A few blocks east, on the other side of Ashland, is the 28th and Eleanor site designated for a new boat house designed by Studio/Gang.  To the river's north, the giant Fisk Generating Station shut down last August after sprinkling its Pilsen neighborhood with the toxic coal-burning by-products for over a century.  Down Ashland at the Stevenson, a large abandoned factory . . . . 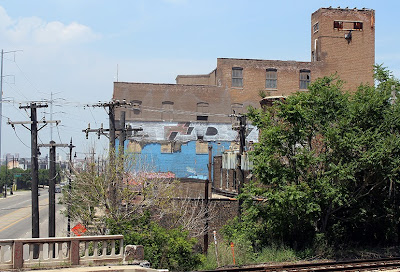 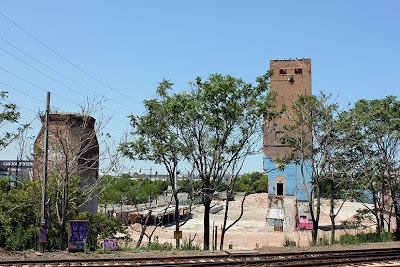 (Those last stubs of structure are gone now, as well.) 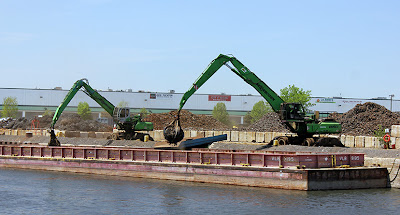 The day I walked the Canalport River Walk, a couple of fishermen watched their lines while, on the opposite bank of the river, a boatyard lowered vessels into the water, next to two cranes moving product in a scrap yard, as next door, trucks of fruits and vegetables moved in and out of the two-story building that's the new home to much of the produce exchange that was previously at Fugard and Knapp's 1924 South Water Market on Racine, which was converted in the first decade of the new century into University Commons, an 800+ unit residential complex.

And then, as you turn the corner on the River Walk, you're faced with this . . . 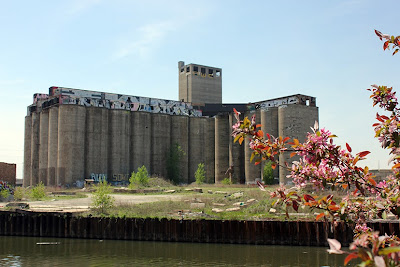 Abjectly noble, ruined and tattooed.  Fantasy Island for the Steampunk set.
Elsewhere, abandoned elevators have been used as massive canvasses.  In Omaha, a grain elevator  was turned over to local artists  to create and install images on 26, 80-foot high silo's.

In a number of cities, grain elevators have been used as giant screens for spectacular video projections, most notably in Quebec City, where  noted stage designer Robert Lepage and his production company Ex Machina transformed the city's Burge grain silos into The Image Mill, an 1,800 foot-wide projection that was so popular during its 2008 debut that it's been revived every summer since.

A similar, if less ambitious program also took place at one of Buffalo's elevators, part of the city's general waterfront revival . . .


If Chicago can set its river on fire, as Redmoon Theater is scheduled to do in October of 2014 . . . 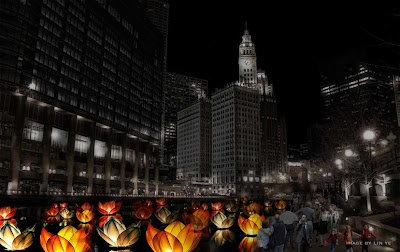 . . . surely we can light up another city marvel far more in need of attention.  In these days of budget cuts and school closings, such an idea might seem almost decadent, but when times get tough, you can't just hunker down, you have to push forward.  One of Chicago's great architectural artifacts is now so much crumbling junk.  Could we make it a canvas for its own historical narrative, in a way that helps find it a new relevance, even as it helps spur economic revival? 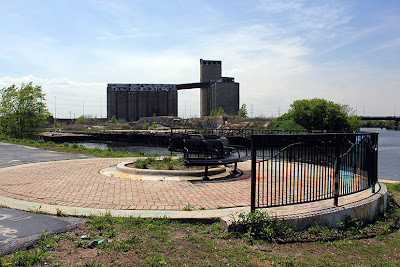 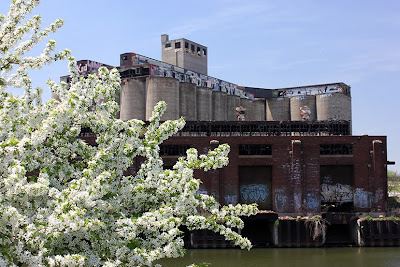 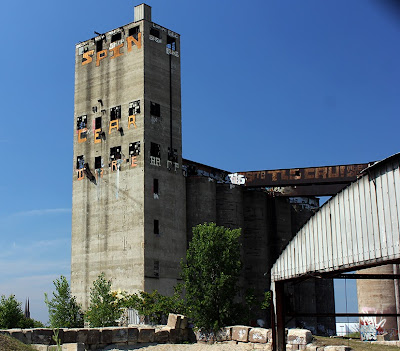 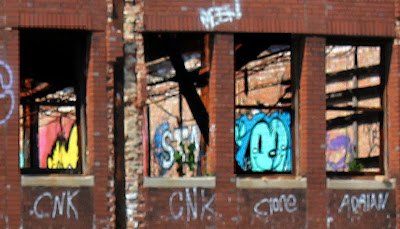 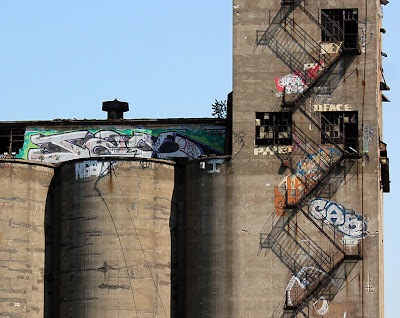 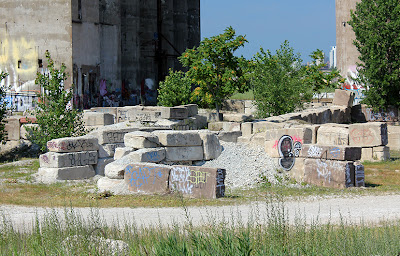 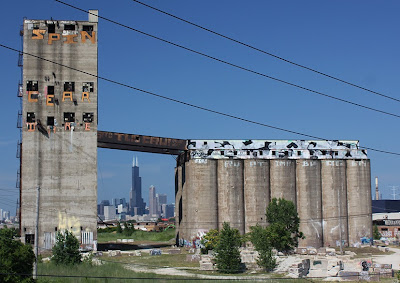 Lynn,
Normally I think your ideas are those of a raving crackpot but you hit the nail on the head here. These industrial relics tell the story of Chicago and a little piece of me dies every time one of them meets the wrecking ball.

Fisk itself is a wonderful treasure. It reminds me of the Battersea Power Station in the U.K. and I hope there is a way to save it as well.

The tragedy of these types of structures is that their scale is so grand that recreating them would be next to impossible. A scrapped Frank Lloyd Wright house—terrible as it would be—could be reassembled by the right group of craftsmen. But these structures? Once they’re gone, they’re gone.

Thanks for the thoughtful comments.

I will work to get back to raving crackpot status as soon as practicable.

It would be wonderful to do something useful and fun with this site. The silos remind me of the Goldberg Prentice that Northwestern is hell bent on distroying. Maybe the University/Hospital could be convinced to help with this effort in exchange for pulling strings to put all thier Streeterville residential neighbors put into the UK Village ward and tearing down building light years before they have a plan for the empty lots thier creating....Just a thought.

Any word on the exact days for the Redmoon Great Chicago Fire Festival?

It should be turned in to a Museum of Food. Documenting the history of food innovation in Chicago/US. Could also teach children about nutrition and fitness (climbing wall?)

The Museum of Food! That's a a great idea in Chicago! Hey, anonymous, who are you? Show yourself and stand behind your wonderful idea.

I have some nightime photos I have taken from the top of these silos, let me know if you would like them to include in your blog! Thanks for the history lesson!

Thanks. I've explored this site a few times and always wanted to know more about it.

Thanks, it was interesting to read and the photos are nice too.