First this was Indira Freitas Johnson's Ten Thousand Ripples placing a hundred Buddha heads at locations throughout Chicago and suburbs . . .

Then there were the 35 giant Chia heads situated along Michigan Avenue for the Plant Green Ideas project.  (Check out our photo-essay.) 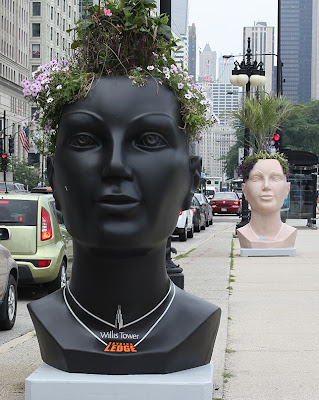 Now, in front of the Museum of Contemporary Art,  Chicago's Great Noggin' War of 013 has been joined, the ante raised. 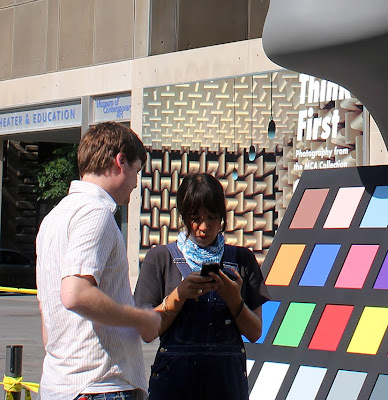 Yesterday Ross-Ho was in front of the Museum of Contemporary Art, checking out the final touches  on The Character and Shape of Illuminated Things, the latest installation in the museum's Chicago Plaza Project.

The centerpiece of Ross Ho's Illuminated Things is a 15-foot-high mannequin head, balanced 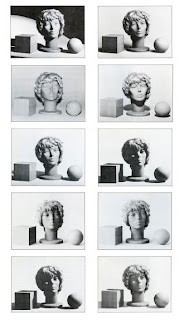 between perfect Corbusian forms - a cube and a sphere - on the two high platforms on either side of MCA's great stair.  Although the most individual of this summer's cranial endeavors, ILLUMINATED THINGS has a generic derivation.


How we see and experience the world is reflected through the use of cameras . . . THE CHARACTER AND SHAPE OF ILLUMINATED THINGS . . . considers this relationship between photography and the act of looking . . . The exhibition is titled after a chapter in an instructional handbook published in 1980 called How to Control and Use Photographic Lighting, which includes several images of a still life composed of three objects - a cube, a sphere, and a mannequins head.  The manual demonstrates how light affects the appearance of objects in a photograph.  For her MCA Chicago Plaza Project, Ross-Ho faithfully re-creates this still life at a monolithic scale, alongside a large scale sculpture of a calibration card, the guide that is used to adjust color during the final printing process.  By including the card- which is actually cropped out of finished photographs - Ross-Ho presents an image that is self-consciously “contaminated.”

Recently I came across an article proclaiming the death of photography as a process of selected moments from reality's infinity of moments.  With the development of technology like Google Glass, so the argument goes, we edge away from capturing what Cartier-Bresson famously referred to as the “decisive moment”, towards recording our lives in a continuous, unbroken stream.  Hierarchies of value are abolished.   You dip into the recorded stream at random.  No moment has more value than any other.  On one level, it's a far closer approximation of the unbroken stream of consciousness (but very different from memory).  On another, it also follows the compulsion of the supply-chain economy to turn everything possible into a commodity. 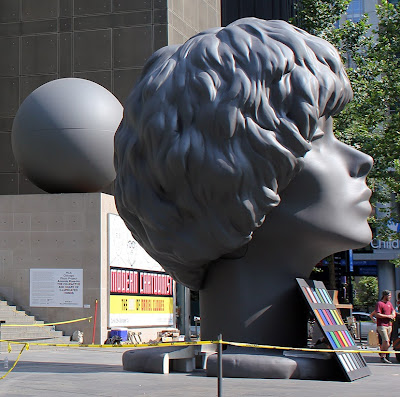 MCA's webpage refers to Ross-Ho's project as “Updating Joseph Beuys's famous declaration ‘Everyone is an artist,’” a statement that revelations in a new book on how Beuys manipulated his own biography is giving a new layer of meaning.

Ross-Ho's Illuminated Things entices a visitor to the MCA plaza to use their camera to create their own version of the piece as its details change in emphasis with the changing of the light and perspective of the viewer.  She's encouraging people to share their photographs through social media using the hashtag #iluminated things, and to email them directly to her.

So grab your camera and explore. Insinuate.  Contaminate away. 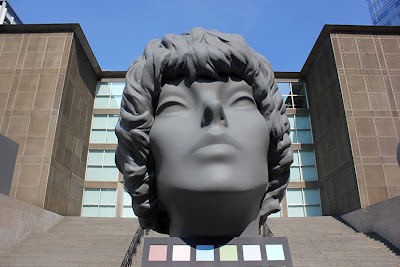 THE CHARACTER AND SHAPE OF ILLUMINATED THINGS will be dedicated July 23, and runs through November 23, 2013

From Cows to Chia's on Parade: Giant Heads of Plant Green Ideas Comes to Michigan Avenue

i'd like to come over with a set of custom lights and light this head up in a funky way, and then take a photo.

Go for it. I still have to see what it looks like at night.

Sorry,Matt, I saw the spam comments this morning and then forgot to delete them. I get an email copy of every comment posted, so they're fairly easy to track and remove. I just have to remember to do it.

I'd love if blogger enabled readers the ability to mark comments as spam. Ah well. (I wanna help)