Dumped at the Side of the Highway: Father Marquette's Strange Monument

The light was good yesterday so I went back to the abandoned Santa Fe Grain Elevator I wrote about a few days ago to take some more pictures from the Damen Avenue side.

After picking up some Panama bananas . . .

. . . I made my way up the vertiginous Damen Avenue bridge, where my view of the Grain Elevator was mostly blocked by large trees overhanging the sidewalk. I stopped to take a picture from an open spot, when suddenly the huge tree right behind me collapsed out of view.  Fortunately,  it was not the end of the world, but a crew far below chopping down trees that were crowding the bridge.  A first class operation all the way, their wood chipper was a Vermeer. 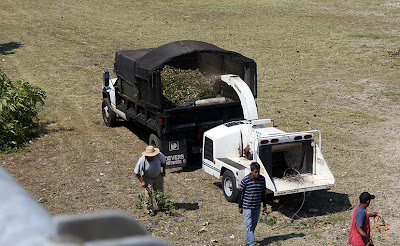 It was at the entrance to the bridge that I encountered  this bas-relief monument to Father Marquette by Hermon Atkins MacNeill . . . 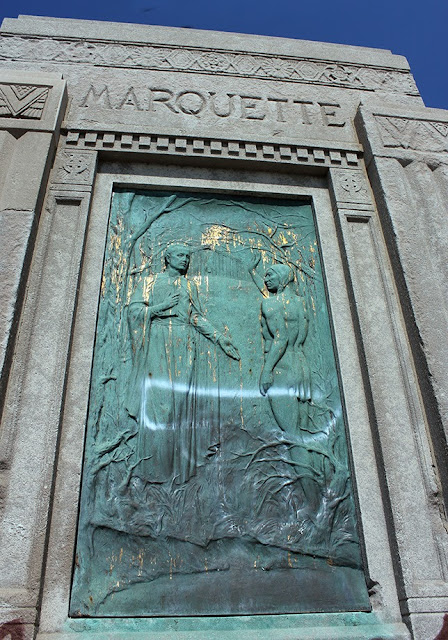 According to a post by John R. Schmidt on his WBEZ blog,  15,000 school kids petitioned to have a monument erected to the Chicago explorer, and mayor Big Bill Thompson obliged in 1930.  Why here?  Well, the supposition is that is that this is where Marquette lived as one of the city's earliest European residents during the winter of 1674-75.  It must have been a much more attractive location when it was just him and the Native-Americans.  One of the trees on the relief looks a lot like the one that got chopped down yesterday.

The monument's plaque contains two curiosities.   The first is the inclusion of swastikas, before the globally historic symbol was eternally tainted by Adolf Hitler and the Nazis.  The second is that Jacques Marquette becomes, on the plaque, "James". 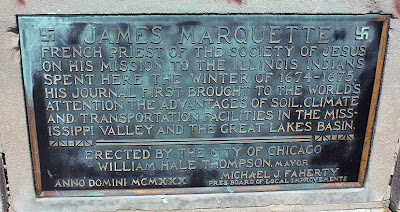 If Father Marquette came back today, what would say about what we've made of his former homestead? Add in the graffiti, the chipped concrete, the abandonment all around it, and there's something forlorn and unsettling about this ghost of a vanished world, this outhouse-shaped bunker, clinging, like a condemned mistake, to a thin edge of sidewalk, against the unyielding stream of cars and tractor trailers racing past in loud, oblivious menace. 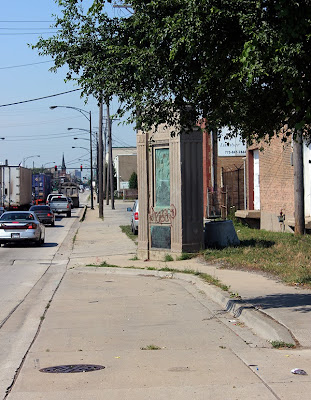 Nice article, Lynn. Hermon MacNeill also did the bronze reliefs at the entrance to the Marquette Building in the Loop. I believe he was also involved with much of the art at the 1893 Columbian Exposition.

My guess is that the swastikas reference his contact with the Native Americans in the area: From Wikipedia: "It has been found in excavations of Mississippian-era sites in the Ohio and Mississippi River valleys".